Lax Reproductions Studio is located in the heart of the beautiful Northwood's in Conover, Wisconsin. They are known for their state of the art molds and record breaking musky trophies.

Rick Lax, son of Ron Lax, has been running the business since his father's retirement in 2003. Rick had worked with his father learning the fine points of taxidermy since the age of 12. In 1993, Rick and Ron formed a partnership. Through the many years of hands on taxidermy and the awareness of catch and release hitting an all time high, they could see the important need for quality reproductions in the future. With many large fish being taken over the years and being brought to Lax Taxidermy Studio for mounting, they began to make molds of the best specimens available.

Since then, Lax Reproductions, formerly known as Lax Taxidermy, has been putting their years of experience with fish into developing the best fish reproductions on the market today. With total control over each individual mount, trial and error, and ensuring custom workmanship through many years of experience, Lax Reproductions has developed the only fish replicas available today with full mouth detail molded from the real specimens. All molds feature open flared gills and the actual teeth molded directly from the specimen. Lax Taxidermy is the FIRST to pour molds directly from a specimen's mouth.

This state of the art, premium quality reproduction work has been a self taught trial and error process developed over many years of molding and casting fish. Many years were spent experimenting before they put these one of a kind, superior quality replicas on the market. All molds are made in house and have come off of prime specimens that were brought to them for mounting. Specializing in all species of fish reproductions, Lax Reproductions has the largest supply of sizes and molds in the world. They are constantly making new molds as they receive prime specimens, to increase their available selection of molds. By continuously refining the quality of their replicas with the newest types of products that are available today, they are able to produce the very BEST quality replicas in the world. 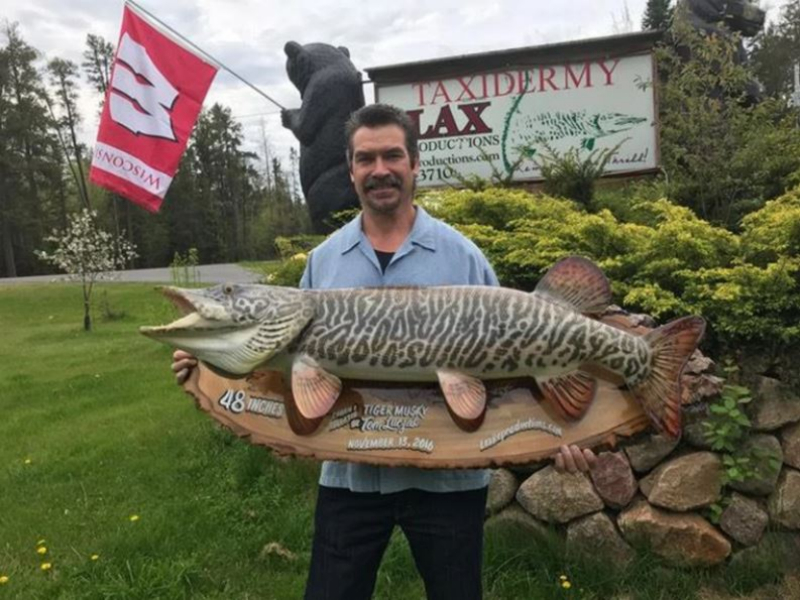 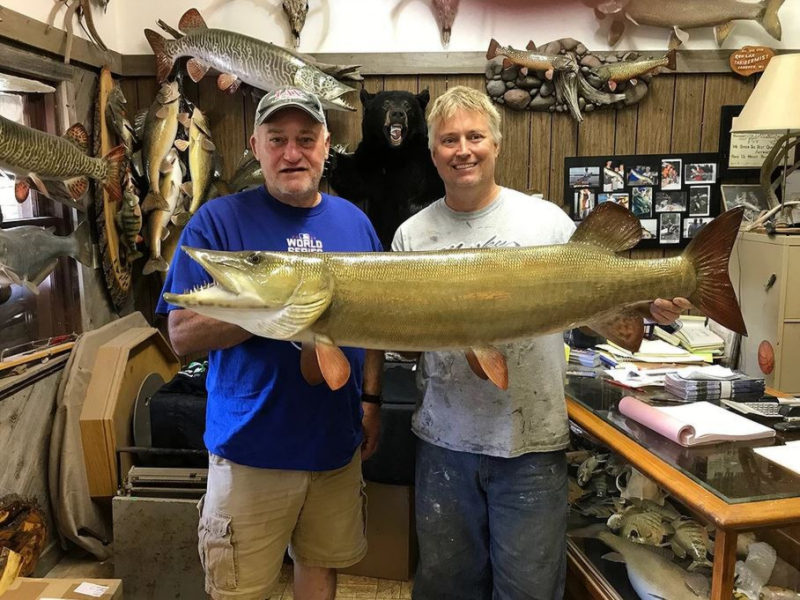 Lax Reproductions has a reputation for mounting trophy size fish, especially muskies. This statement is backed by the fact that they have mounted over 8 muskies in excess of 50 pounds, the largest being a 60 inch musky out of Lac Vieux Desert in the 1980's. Also included are the two largest hybrid muskies ever caught in the world. The first being 54 inches long and weighing 51 pounds 3 ounces. The second largest hybrid musky caught in the world was caught by Delores Ott Lapp in 1951, and was 53 inches long and weighing 50 pounds 4 ounces. Both fish were caught on Lac Vieux Desert in Vilas County, Wisconsin. Lax Reproductions also created a reproduction of the World Record Silver Musky caught by Louis Spray on the Chippewa Flowage in 1949. The musky measured 63-1/2 inches and weighed in at an amazing 69 pounds 11 ounces.

Lax reproductions produces hundreds of replica mounts yearly. The information most vital to placing an order is the length, girth and a clear photo. These measurements and photos should be taken only if it does not harm the healthy release of the fish. Once the measurements are received by the studio, you will be asked to pick out a style and pose from the many available.

Lax Reproductions Studio backs their reproductions with a 100% money back guarantee. They guarantee this quality of work by their statement "We still build them one at a time."