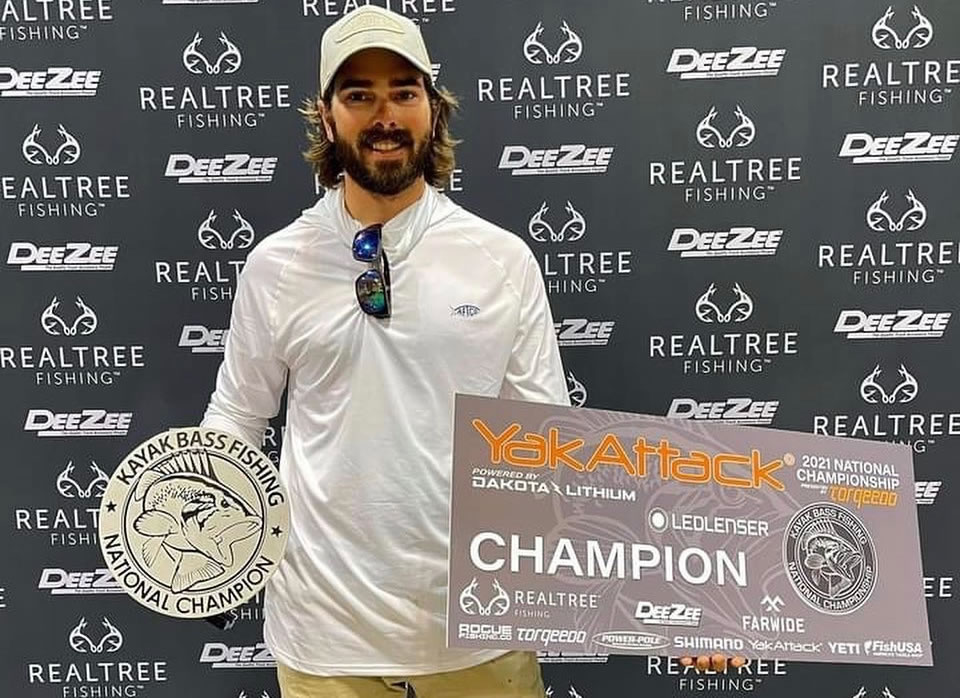 Massive fish caught during pre-fishing provided an intriguing preview to the historic limits of bass that would show up during the actual competition, including multiple daily five-fish limits totaling over 100 inches and - for the first time ever in KBF National Championship competition - two different three-day catch-photo-and-release limits totaling over 300 inches.

At the end of the drama and excitement, Texas angler and St. Croix Rod Pro, Guillermo Gonzalez, bested a field of 349 of the nation's best kayak bass anglers to win the KBF National Championship, while also taking home the 2021 KBF Trail Series title.

A kayak-tournament veteran of more than ten years, Gonzalez isn't new to winning tournaments and championships. The 2017 KATS Angler of the Year has been on a hot streak of late, posting three top-ten finishes and a win in this year's Hobie BOS, as well as a KBF Trail Series win on the Trinity River. In addition to taking home the 2021 Realtree Fishing KBF Trail Series Championship title, Gonzalez remains squarely in the hunt for the Hobie BOS Angler of the Year title, which will be determined after the Hobie BOS Tournament of Champions (TOC) scheduled for November 12-14 at Alabama's Lake Eufaula. 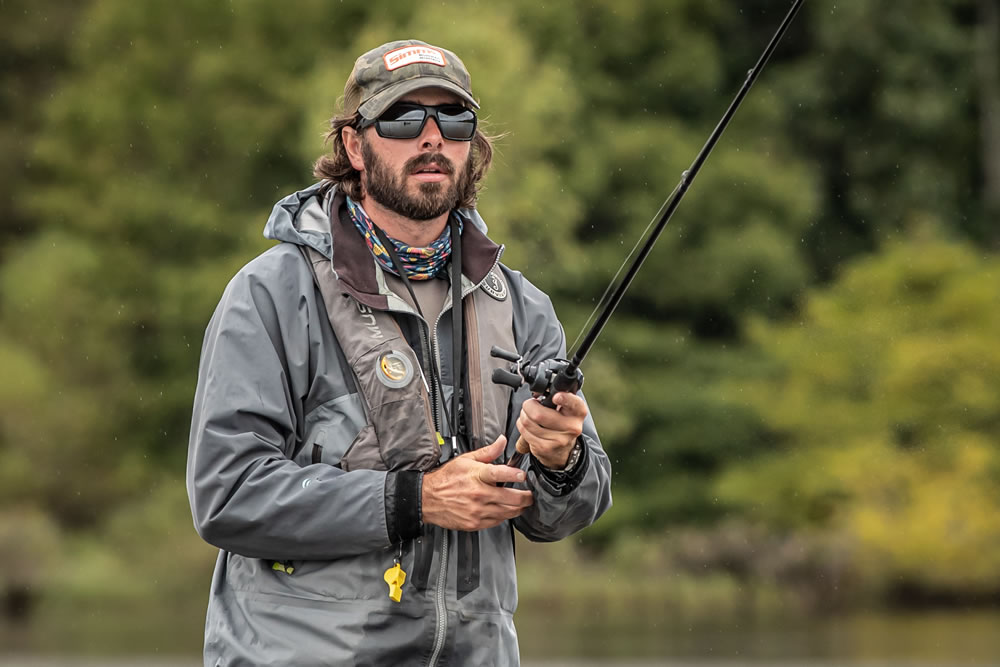 Shane Durrance photo, courtesy of Hobie BOS
Gonzalez struggles to attribute his recent string of top performances to any single factor, but points towards a relaxed mindset as a possible explanation. "I really don't know; it's just happening," he says. "You wouldn't know it from the exceptional competition at these events, but both the KBF and Hobie BOS events have a really laid-back feel about them. I can enter these events and just go with the expectation that I'm going to see a lot of good friends, have a really good time, and try to do my best. I have already proven to myself that I can compete, so I can go into these tournaments more relaxed and that makes things a lot more fun."

The 2021 KBF Trail Series Champion says he went into the KBF National Championship at Shreveport-Bossier City last weekend with a spinnerbait pattern he fine-tuned during practice. That single presentation, it turned out, would hold up throughout the three days of competition.

"I was fishing a spinnerbait with white painted blades, Gonzalez reveals. "I've been experimenting with new blade combinations in tannic water… generally combinations of copper and white. Day one I was catching some fish on copper and white blades and I switched to solid-white painted blades and started catching bigger bass. I stuck with it for all three days and averaged over 100 inches of bass each day."

Because so much of successful bass fishing hinges on what's happening right now - not yesterday or even a few hours ago - it's rare that tournament anglers commit themselves to a single presentation over the duration of a tournament, much less one that lasts for three full days. Nonetheless, Gonzalez bested a talented field of 348 other anglers with his spinnerbait and a single St. Croix rod.

"St. Croix makes the Best Rods on Earth® and I've been saying for years that the St. Croix Legend Tournament Bass Sweeper (LBC70MHMF) is the best spinnerbait rod on earth. It has just the right amount of tip for making really accurate casts and the ideal action for keeping bass pinned up when they roll up and slash at a moving spinnerbait. I caught hundreds of bass over the course of this past tournament and I hardly lost any of them," Gonzalez reports. "That's really rare when fishing spinnerbaits."

Gonzalez wishes to thank and congratulate KBF organizers for putting on such a well-run championship event and tournament trail. "The KBF team, their sponsors, and hosts do a great job at making these events fun and easy," he says. "Last weekend's event in particular was one of the smoothest I've ever been involved with."

He also tips his hat to the folks in Park Falls, Wisconsin. "I've been a part of the St. Croix family for a few years now and can't say enough about them. Of course, you've got these amazing fishing tools which make my job of competing so much easier and more fun, but it's the people behind the brand that I appreciate just as much," he says. "I love the fact that the rods I use are handcrafted by hardworking Americans whose passion for excellence matches my own passion for fishing. And whenever I talk to someone at St. Croix or need anything I'm always treated like family. St. Croix is a rare and special company and I couldn't be prouder to be a part of that team." 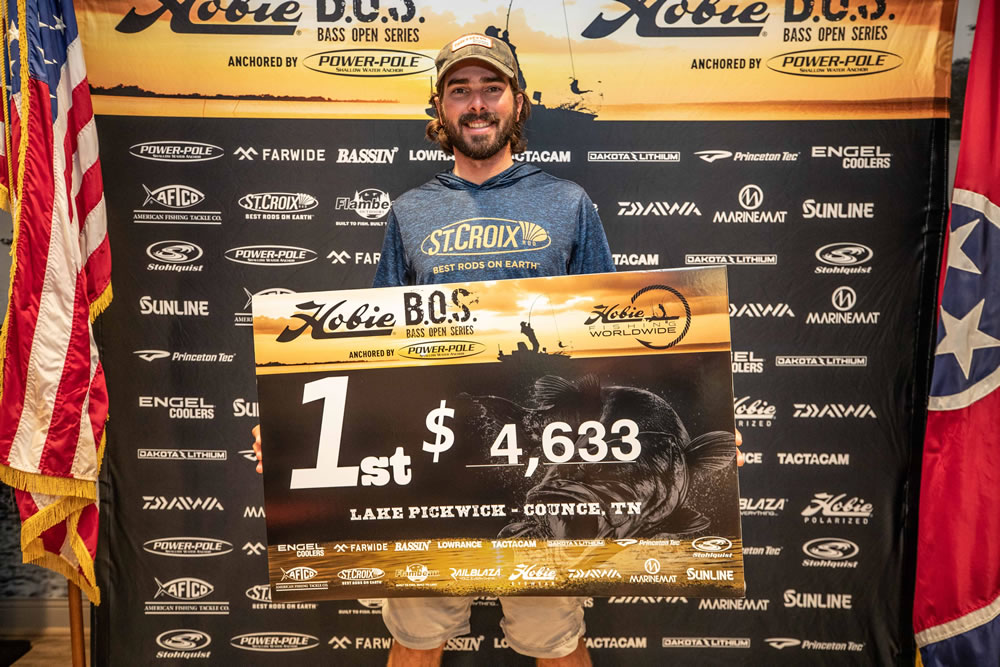 Gonzalez after his Hobie BOS win on Pickwick Lake last month. Shane Durrance photo, courtesy of Hobie BOS
All eyes will be on Gonzalez November 12-14, when he'll battle against 49 other elite kayak anglers on Lake Eufaula at the 2021 Hobie BOS Tournament of Champions in pursuit of the Hobie BOS Angler of the Year title.

For complete information on the KBF organization, tournament and season results, and opportunities to compete in 2022, visit kayakbassfishing.com.