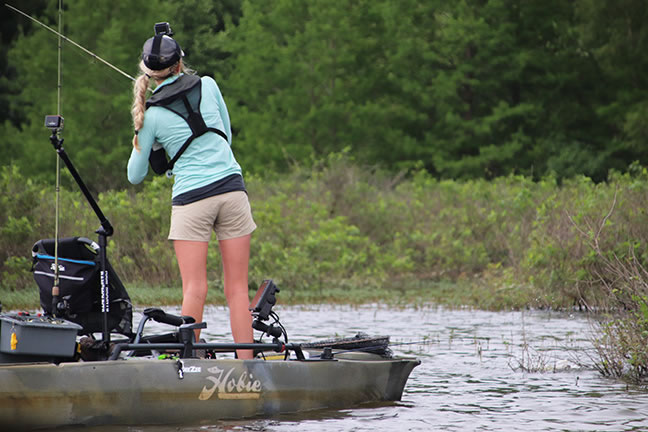 Park Falls, WI – Elite kayak angler Kristine Fischer is headed for the nationals! Last year, only her second on the professional circuit, Fischer placed a very respectable third in the Hobie Bass Open Series (B.O.S.) on Kentucky Lake. This year, the Weeping Water, NE resident won the tournament held May 18 and 19. Along with the other top six competitors she has earned a spot in Hobie's Tournament of Champions slated for Arkansas' Lake Ouachita on November 9 and 10.

Fischer, a St. Croix Rods pro-staffer, racked up an impressive 178 inches of bass to beat out second place finisher Joshua Stewart (170.25 inches) and Eric Siddiqi (169.5 inches) in a very competitive field of over 100 entrants. With an aggressive bite and the lake's bigmouth population spread across various stages of the spawn, many anglers scored well but Fischer put herself over the top by working shallow water far removed from the rest of the pack. 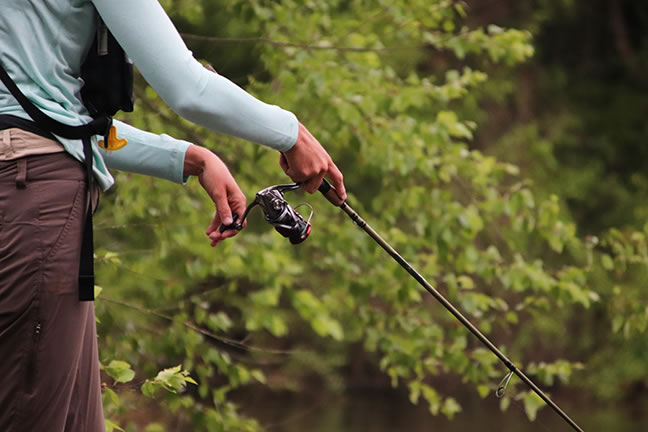 Photo by Blair Travis
"My strength is usually deep-water fishing but I wasn't graphing much on the ledges during pre-contest fishing, so I decided to move in shallow," revealed Fischer. "I also wanted to get far enough away from the tournament headquarters to cut down on my competition so I drove about two hours before launching. Working in 2.5 to 4.5 feet of water, I found both quantity and quality fish in a small area with several individual spots I could rotate. Under bright skies, the bite died early so I knew I would have to fish fast on Saturday morning which was also sunny. I figured Sunday, with some early morning wind and rain predicted, would be my chance to break away from the pack - and that's exactly how it played out."

With the fish all to herself, Fischer drilled a limit by mid-morning on Saturday and then moved off the spot to save the concentrated fish for Sunday when she thought they would be more aggressive. Returning the next day, she found the fishing explosive. 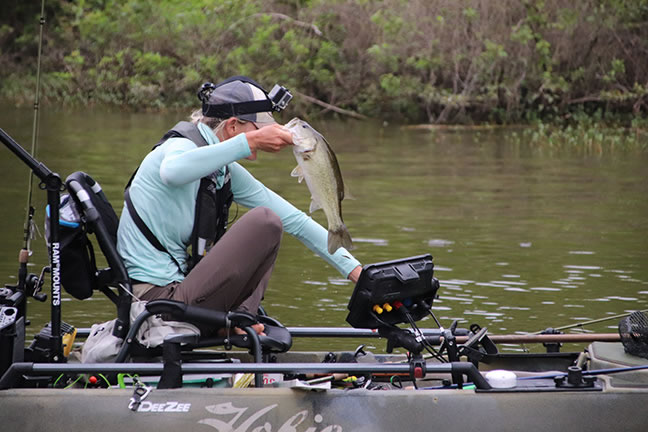 Photo by Blair Travis
"It was one of the best shallow water days I've ever experienced," she said proudly. "I must have boated close to 40 bass! I just stayed in that general area and rotated through my target spots. The bite was amazing - and I never saw another kayak either day."

Fischer, who grew up catching pike, perch and walleye with her family didn't get serious about bass fishing until 8 years ago. She began tournament fishing only three years ago but seems to be an incredibly fast learner.

"It's important to sharpen your skills and learn all the techniques," she says," but having great gear really helps, too. For this tournament, like every other one I enter, I headed out with eight or nine St. Croix Rods in the boat. They really are "The Best Rods on Earth!" and the combination of their strength and sensitivity played a big part in my success."

Four St. Croix rods in particular helped propel Fischer to the top spot. Her most productive rod both days was a 7'5" medium-heavy, extra-fast Legend Tournament Bass Swim Frog rod. "That thing makes for phenomenal precision casting," she explained. "I can skip a buzzbait up and under cover with it really well. I used it to throw my Ribbit Frog and Buzz Frog. It produced my limit on day one and one of my limit fish on day two. I absolutely love that rod."

A 6'9" Legend Tournament Bass Sweeper Spinnerbait rod was her second choice. It saw daily duty with spinnerbaits and swim jigs and was responsible for producing her Sunday limit by 7 a.m.!

"That morning there was some rain and a cutting wind but the fish were really turned on," she recalled. "I caught about 15 fish on that setup. As the wind started to abate and the sun peaked out in the afternoon, I tied on a neutral-colored swim jig and drilled a 5-pounder. I caught a lot of upgrades with that combo."

Fischer also fished stick beds with her Legend Xtreme casting rod, which accounted for her biggest bass on day one and a limit fish on day two. 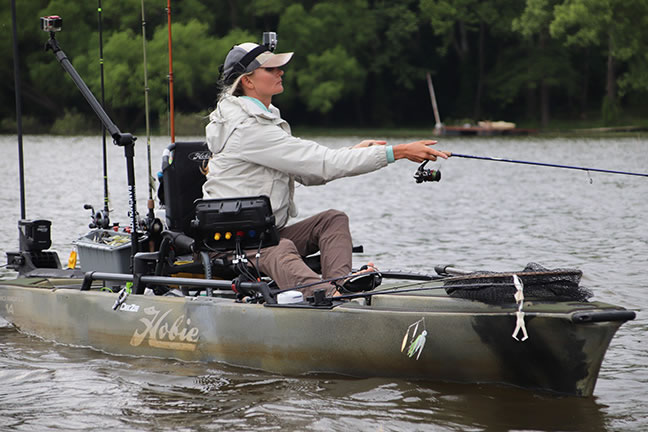 Photo by Blair Travis
"And, of course, I threw my all-time favorite spinning rod: a St. Croix 6'10" Legend X, medium -power, extra-fast rod," Fischer continued. "I used that one to skip a caffeine shad under docks and through the grass. Whenever the fish started striking short, I switch to this setup. I'd send that shad right out to where I missed, give it a twitch, and catch that fish. That rod is an absolute joy to throw. It's super-sensitive so I can fish a light shaky-head or weightless soft plastics on it. I almost always have a fluke style bait or caffeine shad tied on this one. It's my go-to when I need a finesses application."

Overall, says Fischer, the response to her win has been tremendous. "I can't even begin to describe the wonderful feelings I've gotten from all the good wishes, congratulations, respect and support. It's come from regular anglers, competitors, my sponsors, family, friends and complete strangers. I'm especially thankful for how the kayak fishing community has responded. That group is like family to me and I so appreciate their support."

As for being a woman competitor in a male-dominated field, the St. Croix team member says that there's never been a question as to if women can win at this sport, there just haven't been enough female participants to even out the odds.

"The takeaway," she concludes, "should be that if you believe competitive fishing is something you want to do and this is where you passion lies, give it a shot. Sure, it can be scary and intimidating at first, but the rewards that come with the hard work, perseverance and persistence are greater than you could ever imagine. Go for it."

St. Croix Rods
If you have a press release that you would like to see featured on Lake-Link please contact us.
TRENDING DISCUSSIONS
Advertise here
Advertise here
Please take a moment to visit our sponsors. Without them we would not be here.