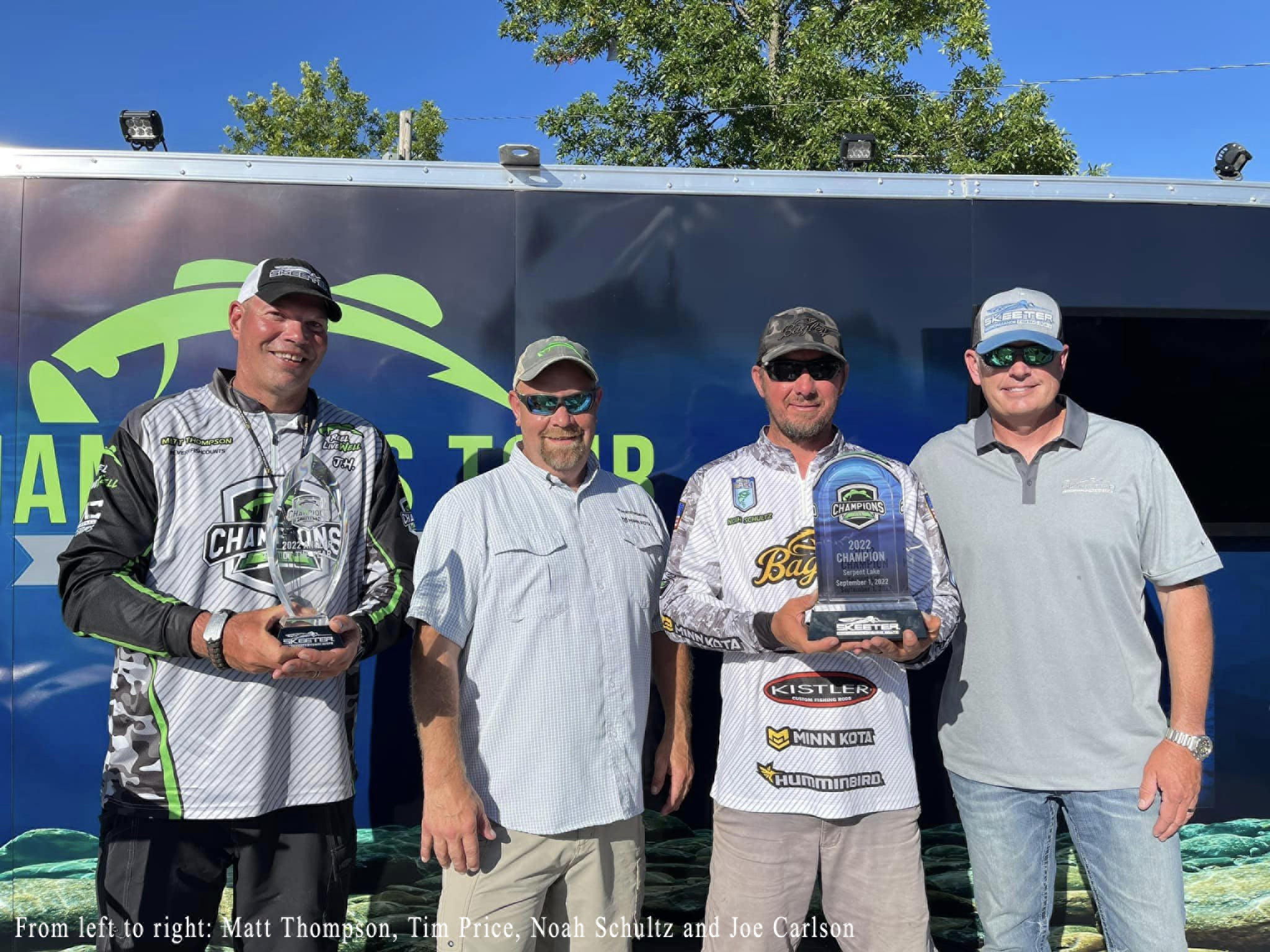 Humminbird and Minn Kota anglers Noah Schultz and Matt Thompson finish up Minnesota Champions Tour with Championship Victory and Season Angler of the Year Awards
As a tournament angler, it can be very challenging to be consistent. For Humminbird and Minn Kota angler Noah Schultz, he hasn't just been consistent - he has dominated. On September 1st on Lake Serpent in Minnesota, Schultz filled another space on his shelf of Champions Tour Championship trophies. Having won three of the last five Champions Tour Championship Titles, he is also taking home his third fully rigged Skeeter Boat for his unmatched efforts.

"A lot of the lakes we fished I have never been to before and they are all different," said Schultz. "I feel like overall, I am starting to build some confidence and the more events I fish, the more driven I become to keep getting better. I have spent a lot of time learning and dialing in my electronics to help me be the most efficient angler I can be - Humminbird and Minn Kota have played a massive role in getting me to where I'm at."

Known as one of the best tournament anglers in Minnesota, there are several keys to Schultz's tournament days to keep him efficient on the water.

"Recently at Gull Lake, the fish were positioned on deep grass and it was key to make precise casts to exactly where the fish were set up. The Champions Tour is a catch, weigh and release format, so being efficient with your time is a must to be successful," said Schultz. "Having Humminbird MEGA 360 Imaging® was clutch to locate high-percentage deep grass, and with my Minn Kota Ultrex™ trolling motor working in tandem with Humminbird MEGA Live Imaging TargetLock™, I could make a super accurate cast and put my bait right in front of the fish, cast after cast."

Since the introduction of live sonar technology, anglers have had to choose between Spot-Lock and the use of their MEGA Live transducer. To solve this dilemma for anglers, Humminbird has introduced MEGA Live Imaging TargetLock™, giving back Spot-Lock to anglers who demand total boat control while actively fishing with MEGA Live. 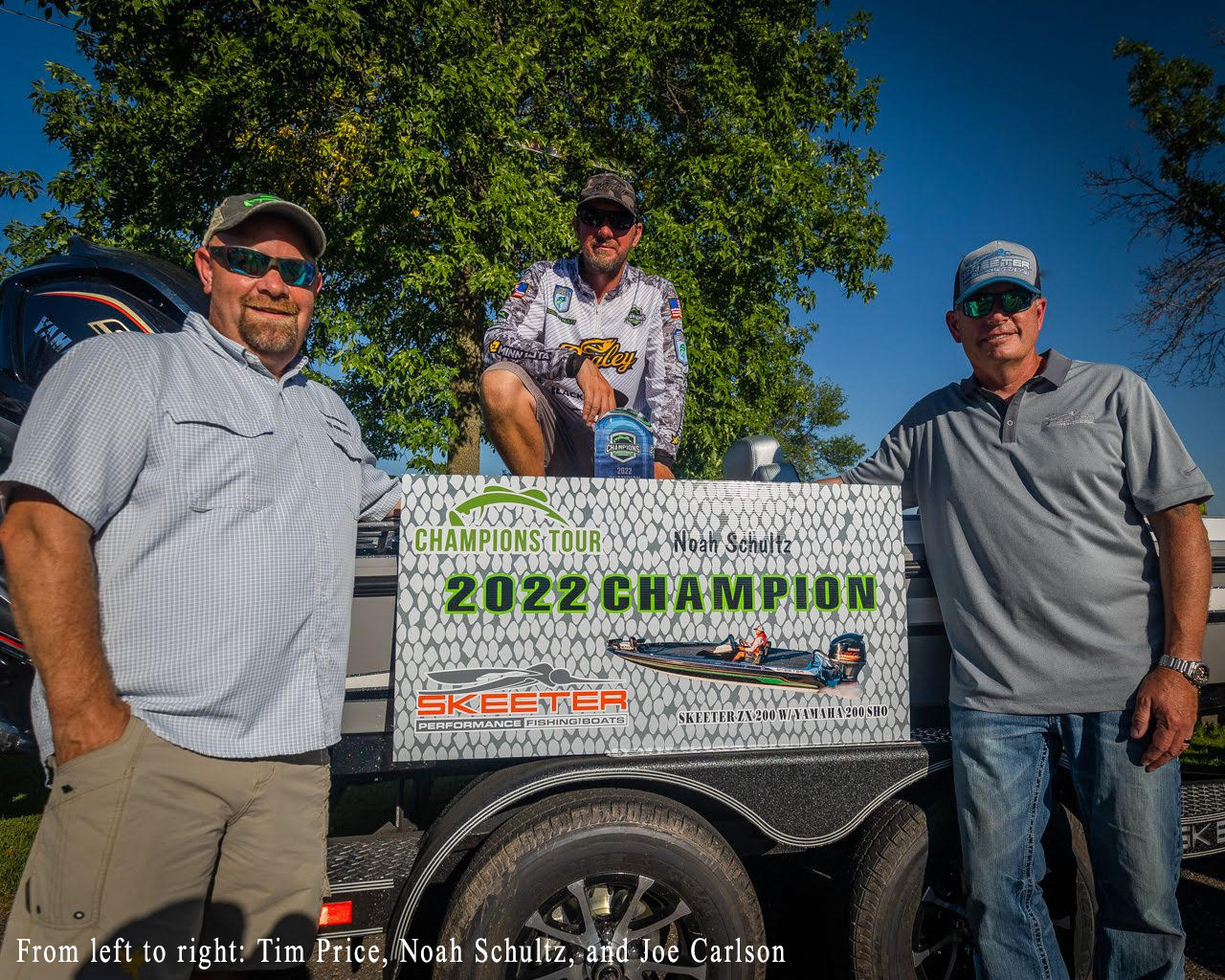 "This technology has been an absolute game changer for me. It has made my process on the water during tournament days more efficient overall." Schultz concluded.
While Schultz brought home the championship title, another Humminbird and Minn Kota pro was able to perform consistently enough over the course of the season to be named 2022 Champions Tour Angler of the Year.

Matt Thompson is known for his ability to catch giant musky throughout the Midwest and has translated that experience into becoming adept at catching big bass. His big fish mentality has allowed him to fish his strengths and compete against the best anglers in the region. 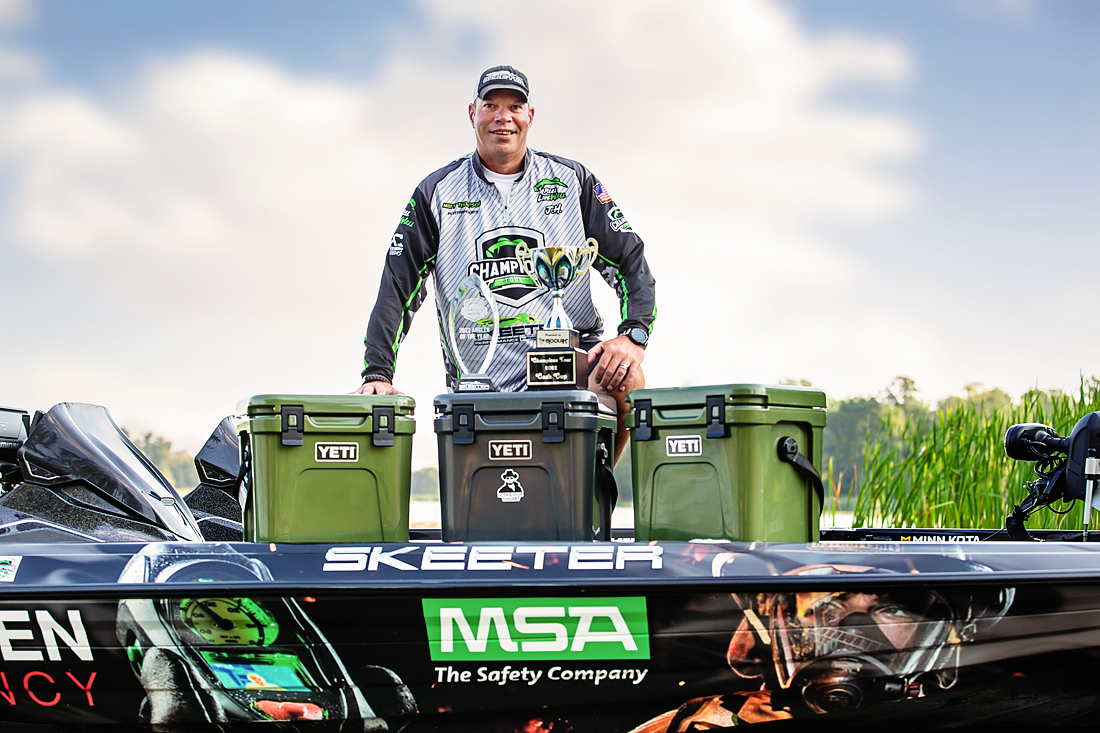 "It's really a dream to be able to bring home Angler of the Year against a hand-picked field with 50 of the best Midwest anglers," said Thompson.
"With this format, knowing where you stand compared to everyone else - it's really 90% mental. You can spin out very quickly knowing what everyone else has for weight throughout the day. I fish completely different from the rest of the field so this one is pretty special for me and without Humminbird LakeMaster® mapping and MEGA 360, I don't achieve this accomplishment," said Thompson. "My musky background has taught me how to hunt for those apex predators and it has taught me where those bigger predatory fish will reside, the combination of LakeMaster and MEGA 360 really help me identify those areas."

Throughout the last four seasons, Matt has been known to catch the big bass at each of the Champions Tour qualifying events. Adding to an already impeccable season, Thompson has earned the Champions Tour YETI Big Bass Award in 11 out of 15 events he has fished with the tour, three of the four times being in 2022. There's no doubt why his fellow anglers nicknamed him the "Big Yeti".

Known for having some of the most talented anglers of any tournament trail in the Midwest, Angler of the Year and Championship wins are no small feat. Schultz and Thompson will be closing the 2022 Champions Tour leaving heavy footprints behind with expectations of another successful season in 2023.