In this era of high-definition side image and detailed mapping, when is the last time a major bass fishing event was won without a single fish finder mounted on the winner's boat?

If you guessed as recent as one month ago, you are correct.

When B.A.S.S. announced that tunnel hull boats, like the one Ott DeFoe used to win the Bassmaster Open at Douglas Lake in 2017, would not be allowed in 2018, the Humminbird/Minn Kota pro considered not even fishing the event. In fact, he didn't even enter the tournament until just before the cut-off when he made the decision to borrow a friend's flat-bottom aluminum boat to head up the French Broad River to ply the waters in the mountains of eastern Tennessee for another tournament-winning stringer.

"My buddy hadn't even fished out of his boat but he was kind enough to let me use it so I could access some skinnier water, which I knew would likely be key to my success in the tournament," explains DeFoe. "He hadn't even put electronics on it. It was basically a blank canvas."

DeFoe got to work rigging the boat, immediately mounting an Minn Kota Ultrex on the bow.

"I knew I'd be fishing some pretty heavy current and Spot-Lock would be critical," DeFoe added. "Ever since I won the first tournament I ever fished with an Ultrex on the Mississippi, I've been a staunch believer that when you can concentrate on fishing and leave boat control to the experts, you significantly increase the odds of success. It was proven once again on Douglas where I used Spot-Lock to position my boat exactly where it needed to be to make the best presentation possible."

For those who have seen the Minn Kota Ultrex change the face of fishing over the last couple years, the addition of the groundbreaking trolling motor to his friend's boat isn't much of a surprise. But when it came time to consider electronics, Ott made a move many would find counterintuitive for an angler accustomed to fishing with all the bells and whistles of a tournament-style bass rig.

"The area I planned to fish is shallow. I knew I wouldn't really need a depthfinder. I could see bottom. But I needed a GPS and flawless mapping," said DeFoe. "Rather than spend the limited time I had leading up to the tournament rigging a locator, I simply relied on my Humminbird FishSmart app to navigate to my fishing area each day."

Operating through a clean, intuitive interface directly on his iPhone6 and working with the device's GPS, FishSmart allowed DeFoe to view his precise location at every point in his journey upriver. He had previously downloaded the high-definition LakeMaster map for Douglas.

FishSmart was introduced by Humminbird in March 2018. Within the app, users can purchase and download any of the 1,500+ high-definition LakeMaster maps. From there, they can highlight depth contours and shallow water, offset the water depth based on seasonal changes, or even mark waypoints or routes. 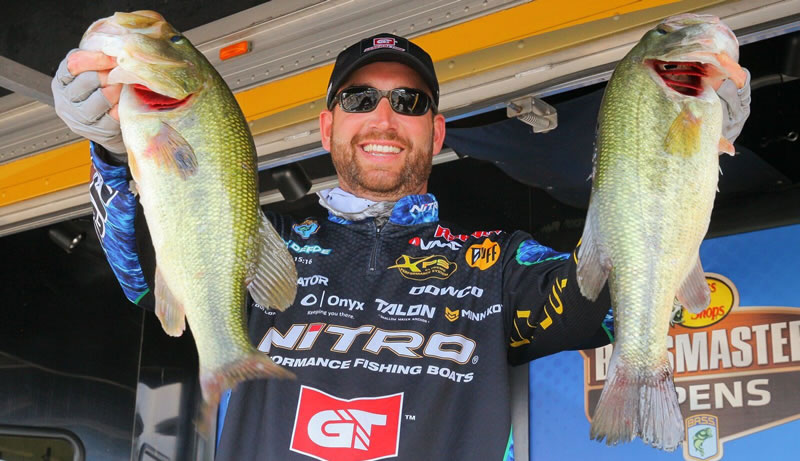 "The water level dropped every day of the tournament. The water level offset and shallow water highlight features were incredibly important as I was able to adjust my map to the actual current depths and identify places I was able to run my boat," DeFoe explained. "The boat was obviously not as fast as the Nitro I typically run so if I could pick up a couple minutes on my commute by taking a shortcut here and there, I wanted to do it. Plus it was a bit foggy a couple mornings of the tournament so having the map in front of me was important to stay on course. It's amazing that I can have all that information on my phone."

Individual high-definition LakeMaster lake maps like the one DeFoe downloaded for Douglas Lake are easy to search, buy, and download within the free FishSmart app. Once purchased within the app, maps can wirelessly transfer to a Bluetooth®-enabled HELIX® and SOLIX® Series fish finder.

On DeFoe's part, he doesn't have plans to strip his regular tournament rig of his Humminbird electronics anytime soon, but he certainly learned to trust the FishSmart app during his victorious run on Douglas Lake.

"I see plenty of uses for the FishSmart app, from downloading high-definition maps for single lakes, navigating smaller boats or boats without sophisticated electronics and even updating the software on Humminbird units. Plus, I use it religiously to study lake maps at home before ever hitting the water. FishSmart will always be on my phone and will get plenty of use from here on out, I can promise you that."