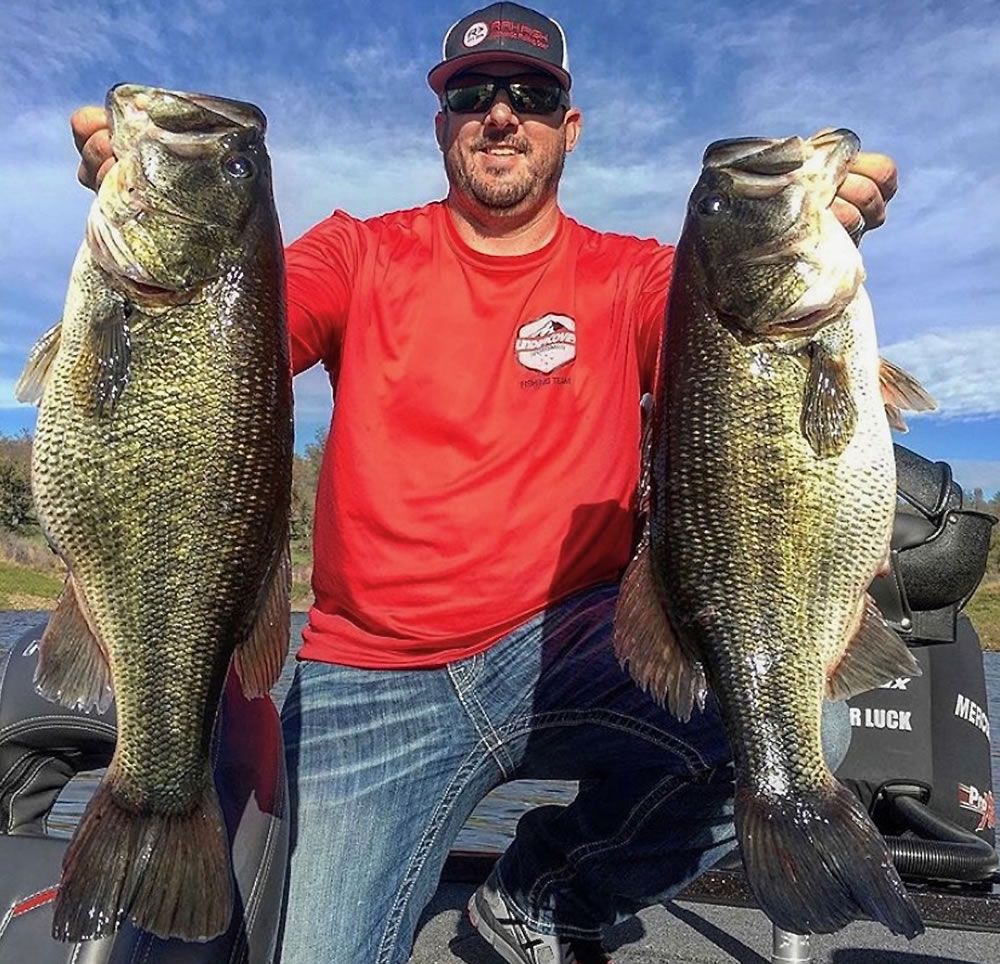 Good morning West Coast! Temperatures should be in the upper 70s this week with lows in the 60s. Do you know what time it is?

Dang right: It's monster bass time, and that means California dreams of double-digit largemouths are about to become reality. With waters warming quickly now, the big girls are sliding up shallow, which - in the case of the bigger, deeper, clear-water lakes and reservoirs of central and southern California - might be anywhere from two to ten feet deep. At no other time throughout the year will it be easier to spot that trophy of a lifetime, but catching one can be an altogether different story. These fish didn't grow to massive proportions by being suckers, and heavy pressure from trophy hunters across the region are continually sharpening their senses.

Still, there are a few anglers who have a solid handle on this game. 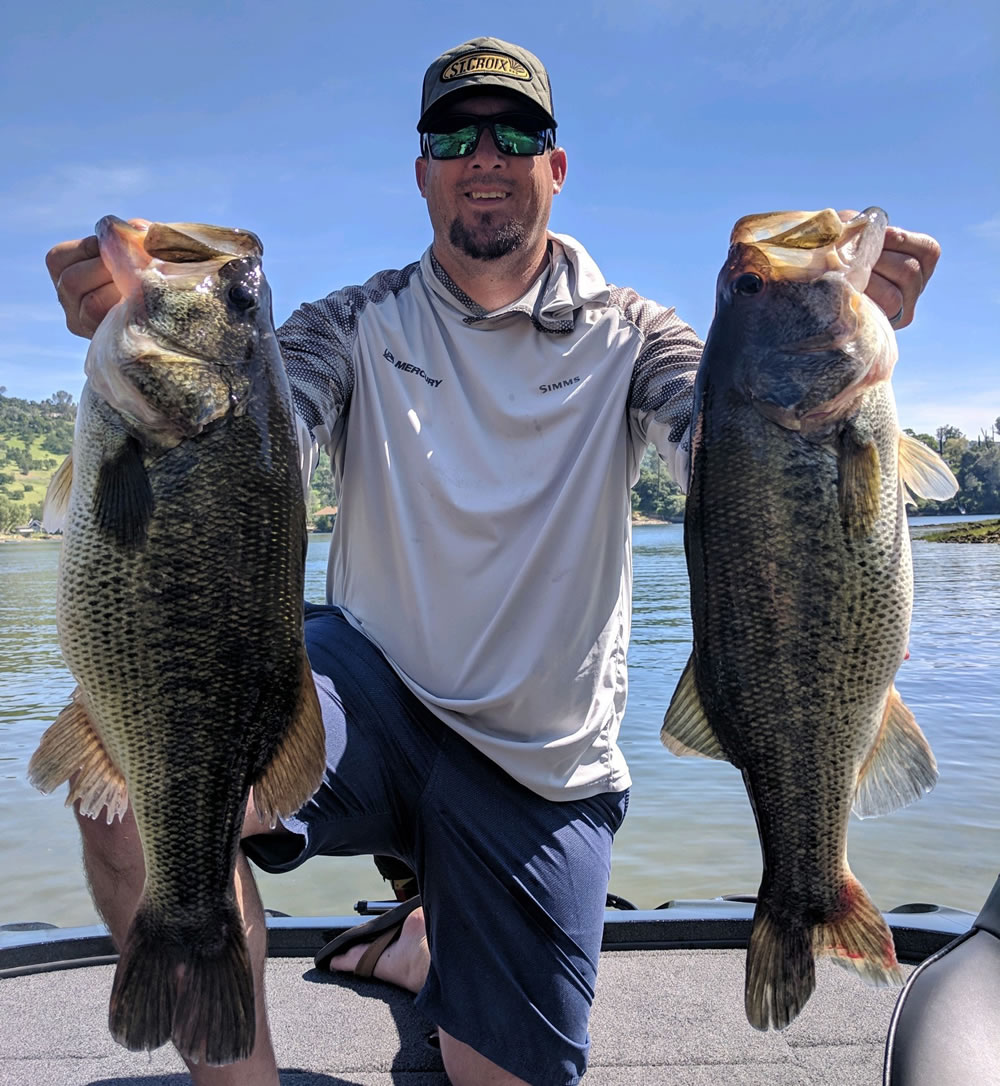 "I live for this time of year," says Frazier. "This is my passion. I'll be on the water every chance I get from now through late June. Each outing is a chance to keep learning, sharpen skills and challenge the smartest fish in the lake. My best bass so far is 15.5 pounds, but I'm searching for something bigger. I've seen them, but for every inch they grow those lunkers seem to get twice as smart."

One key to hooking into a true monster is to fish where the genetics are best, points out Frazier, noting that many anglers who visit California looking for a trophy bucketmouth concentrate on the most famous bass lakes. Those, he says, can be really productive but might not hold enough double-digit fish to offer a reasonable shot at seeing one during your stay.

"The Delta area and Clear Lake are two heavily targeted bass fisheries around the spawn period," notes Frazier. "Clear Lake is rightfully known for producing plenty of seven-to-nine-pound bass, but it doesn't give up many over 12. The Delta is better for bigger fish with a few that break 15 and even 16 pounds. Still, what I call the 'mother lode region' is the Sierra Nevada foothills. There's five or six super reservoirs people don't hear about in this stretch, including New Melones Lake, Lake Tulloch, Lake Success and Lake McClure. Some of these have produced springtime bass topping 18 pounds."

According to Frazier, in addition to being stealthy, putting in time and having the best gear, there are other moves anglers need to make to connect with double-digit bass when they start moving shallow to spawn.

"The first is to leave the male bass alone," he advises. "Those small males are there to court the females. Remove them and she'll just go looking for another mate. Besides, you can exploit the males to drive big, female bass crazy."

The secret, explains Frazier, is to overmatch the male with a big glide bait or eight-to-nine-inch Huddleston trout style swimbait. "You want to throw something the male can't easily pick up or eat," he explains. "I'll sometimes toss that big bait 15 times or more to get a buck frustrated. He'll smack it on the head and then flare his gills and try to blast it away. If he swallows it, I'll simply shake it free. After the female sees this repeated several times, she'll usually swoop in to do the job herself. She's coming in for support - and that's the ticket to drawing a strike."

Ticking off the male isn't the end-all, however. Once that female takes a swipe at the big bait, Frazier switches instantly to a white, four-inch Headbanger BangerLizard or similar creature bait. "I don't want that big one to eat the swimbait because she'll have all types of leverage advantages with that heavy lure in the close-quarters battle," continues Frazier. "Instead, use a light, belly-weighted hook with a corkscrew on the top so there is almost no weight associated with the bait itself. Get that smaller lure in position quickly while the female is still hot and your hook-up percentage can rise to 90-percent or more."

To handle the challenges of this high-pressure, high-torque fishing, Frazier relies on two primary set-ups. His go-to rod for tossing larger lures is a St. Croix Mojo Bass 7'11", heavy power, moderate-fast casting rod (MJC711HMF). "Made with St. Croix's premium high-modulus SCIII carbon, it's exceptionally powerful with plenty of back bone, yet still sensitive and light for its size. It allows me to finely control heavy lures - and if a big female does slam the swimbait, it's has no trouble driving the hook home and steering her around threatening structure. I'll match this rod to a high-quality baitcaster with a super-smooth drag and 20-pound fluorocarbon so the fish don't get line shy."

For the smaller lizard bait, Frazier shifts to a Legend Xtreme 6'3", medium power rod with an extra-fast tip (#XFS63MXF). He'll pair this to a super-smooth spinning reel with 65-pound braid tied directly to the lure to virtually eliminate breakoffs. "That stick is like a sawed-off shotgun," he chuckles. The extra-fast tip and SCV/SCVI blank allow him to feel the subtleties of the bite, even if he can't see it well due to water depth. He says the rod's sensitivity lets him know when the fish has the best hold on the lure before he fully leans into the hook set. "This is St. Croix's hallmark rod series" says Frazier. "It's lightweight with maximum power in the lower section and super sensitivity toward the tip. It's strong enough for me to horse a fish out of trouble, and short enough for me to pitch and flip without the tip hitting brush and sticks when I'm trying to drop a lure into cover. I also love the parabolic curve of this rod under pressure. It's absolutely perfect."

Of course, not all sight-fishing situations are suitable for spin fishing. When the big ones take up in the crook of a tree or tight to significant structure, Frazier opts for St. Croix's new Victory 7-foot, 3-inch, heavy power, extra-fast casting rod (VTC73HXF). "No matter how much I enjoy spinning gear, sometimes I just need maximum control. This new Victory is simply the most powerful rod I've used for this scenario. The blank mixes St. Croix's SCIII and SCVI carbon for extreme lightness and balance, excellent sensitivity, and tremendous backbone. It takes a lot of strength to muscle a 15-pounder away from a dock post or submerged log. This unique, American-made rod gets it all done at an incredible price." 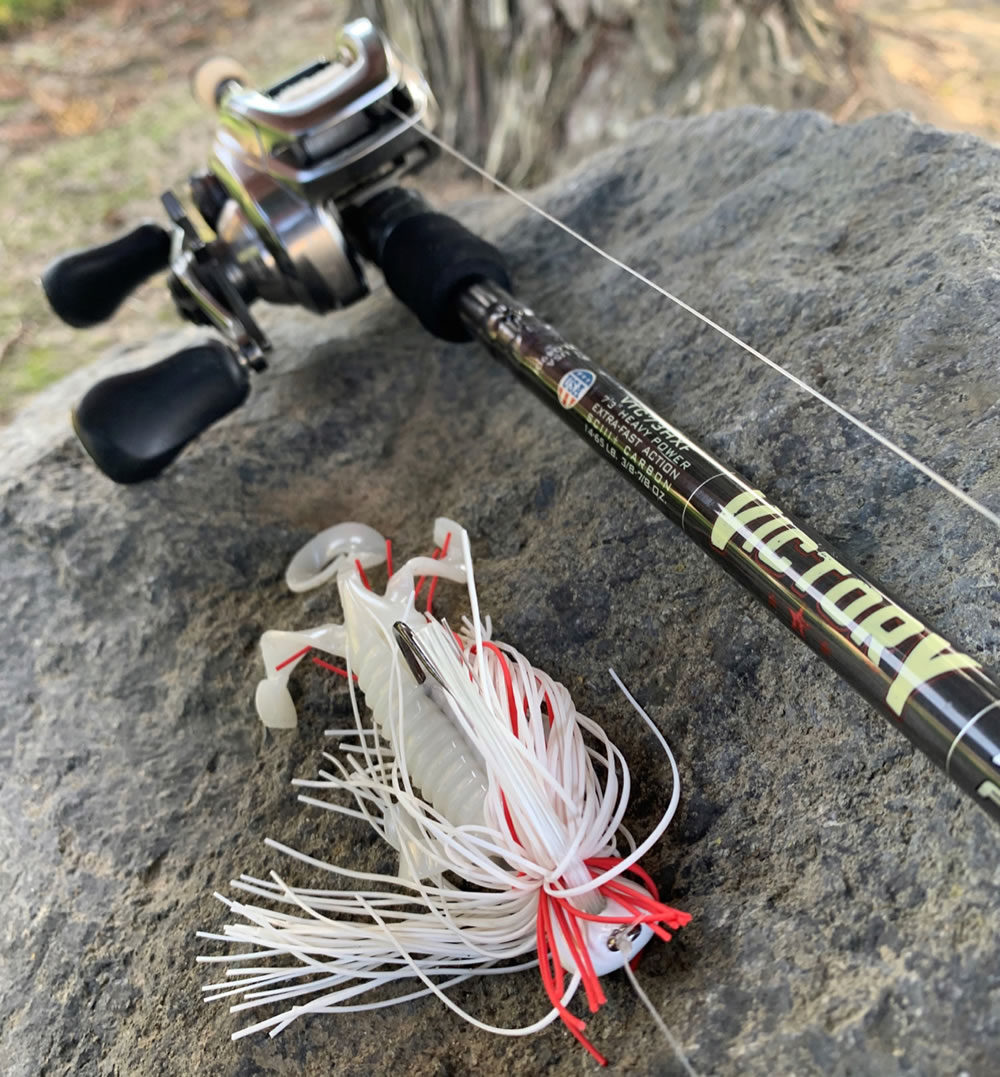 Like Frazier, Kyle Grover of Rancho Santa Margarita, California, is a monster-bass specialist. A recent addition to the St. Croix pro-staff, the 34-year-old focuses most of his attention on Diamond Valley Lake, Perris Reservoir, and a few smaller lakes around San Diego in the southern end of the Golden State. "You'll see some pretty hefty limits in tournaments around here for the next two or three months while the bass are around the beds," he says. "It often takes 30 pounds to win."

Another professor from the bait-and-switch school, Grover starts his sight-fishing hunt when nighttime temperatures stay above 60 degrees and daytime temps push into the upper 70s. As soon as they move out of staging areas in submerged timber and up onto the flats, he'll hit the lakes hard using an eight-to-ten-inch Huddleston trout swimbait to match the stockers the state deposits each spring. He'll let that settle level on the bottom, then give it light twitches. If he gets a rise out of a big female, he'll instantly switch to a drop-shot rig.

"I like to change it up from a great big swimbait to something with a little finesse," confirms Grover. "These fish are highly pressured but the change in size sometimes catches them off guard. With a drop-shot rig, I can place a six-inch Robo worm right on the bottom and, with a light lift of the rod-tip, raise it just enough to get in the face of an approaching female. You can also have success crawling a Speed Craw or Brush Hog, or by tossing a 6-inch Senko worm. That lure just seems to light up bass wherever you find them. As much as possible, I like to use white-colored creature baits because they are easy to spot and track visually, but I will switch to green pumpkin if the fish are playing coy or I'm breaking out a Senko worm."

Because big, shallow bass are easily spooked, Grover believes a shallow water anchor is essential to getting in range since it can quietly limit boat movement. "You need to be as far away from the fish as possible while maintaining pin-point casting accuracy," he adds.

Normally, Grover carries 20 to 25 rods when bass fishing, but for big, spring Californian bass, he counts on three. The first is the same St. Croix 7'11" Mojo Bass casting rod favored by Frasier, which he pairs with 25-pound fluorocarbon tied directly to the lure. "No doubt you need a big, long, heavy rod to cast those big baits and power the hook through," says Grover, noting that the 7'11" Mojo Bass fits that bill perfectly. When using a drop-shot or Texas rig, he'll go with the new St. Croix Victory 7'3", heavy power, extra-fast casting rod (VTC73HXF) and 15- to 17-pound fluorocarbon line. Should he opt for the Senko approach, a Victory 7'3", medium power, extra-fast spinning stick (VTS73MXF) is his weapon of choice. 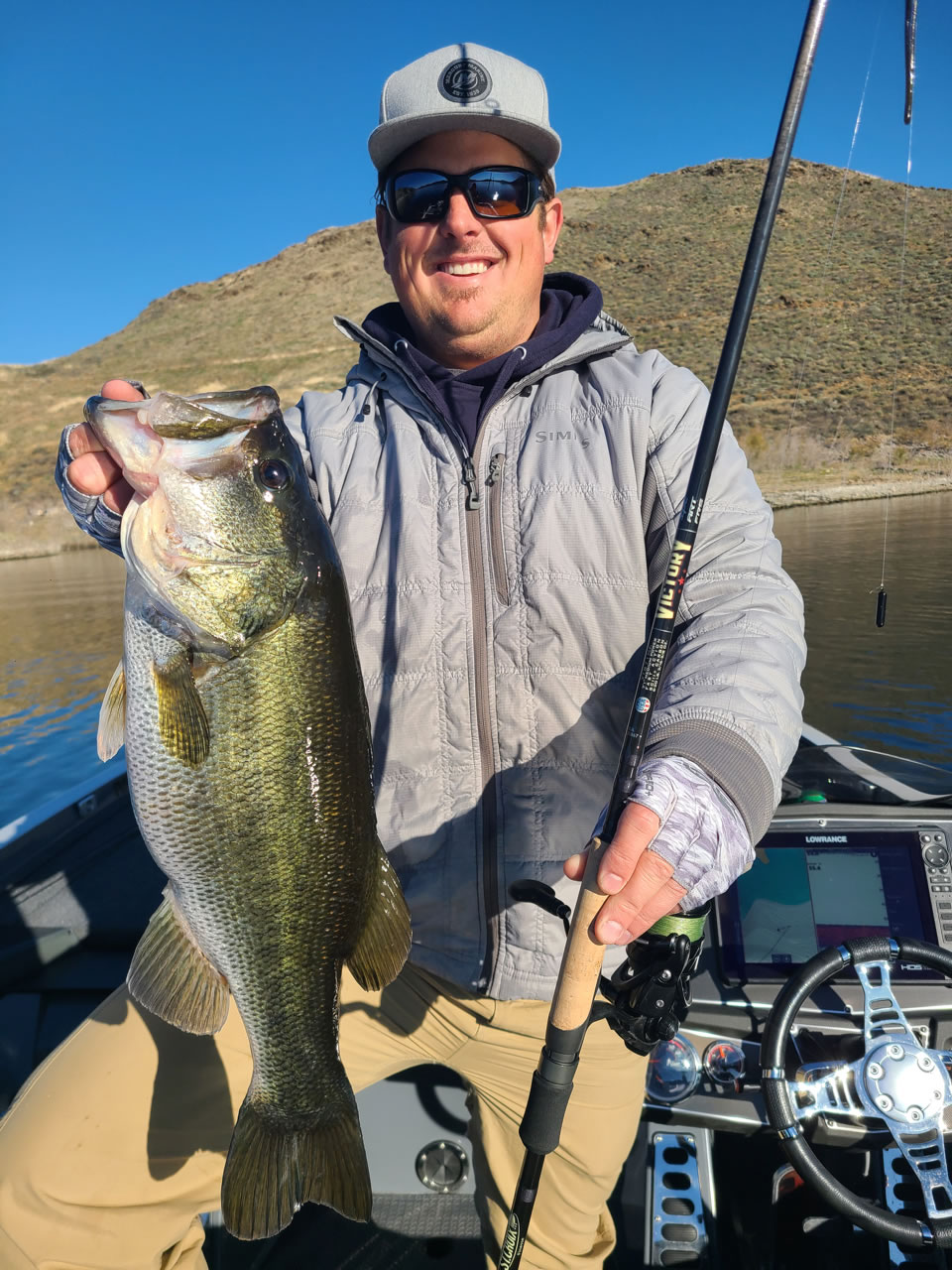 "These three rods let me cover all the bases during the spawn period," surmises Grover, whose top largemouth is a Lake Perris beast that tipped the scales at 13 pounds. "The new Victory Series, in particular, is outstanding in all categories, especially for the price," he states. "Their light weight and exceptional balance helps with the repetitive casting this game requires. They're also very sensitive and outstandingly strong."

With the Victory 7'3" heavy, extra-fast model, Grover believes the softer tip tilts the odds in his favor during close-up battles or when he gets excited and really sticks it to a big fish during an adrenaline rush. "It has the perfect amount of give to guard against breakoffs on heavy hook sets with big bass," says Grover. And as for the 7'3" medium power, extra-fast action Victory spinning rod? "St. Croix calls it the 'Max Tactical', but I just call it ideal," he says, "especially for working Senkos and similar lightweight soft plastics because its extra-sensitivity allows me to really get a sense of how a bite is progressing, even if I can't see the take.

"Collectively, these rods are the perfect package during the spring, sight-fishing period," concludes Grover. "They never leave me feeling under gunned. That's important because any day over the next couple months might see you set up on the bass of a lifetime, and that's an opportunity you can't afford to miss."

Sight-fishing giant, springtime bass - in California or anywhere else - is an exciting game. But don't forget why these big, beautiful fish are here. The foundation of healthy and sustainable fisheries depends on successful reproduction, so handle any bass with care and appreciation, then get them back into the water as quickly as practical at the same locations where it was caught so it can do its thing. 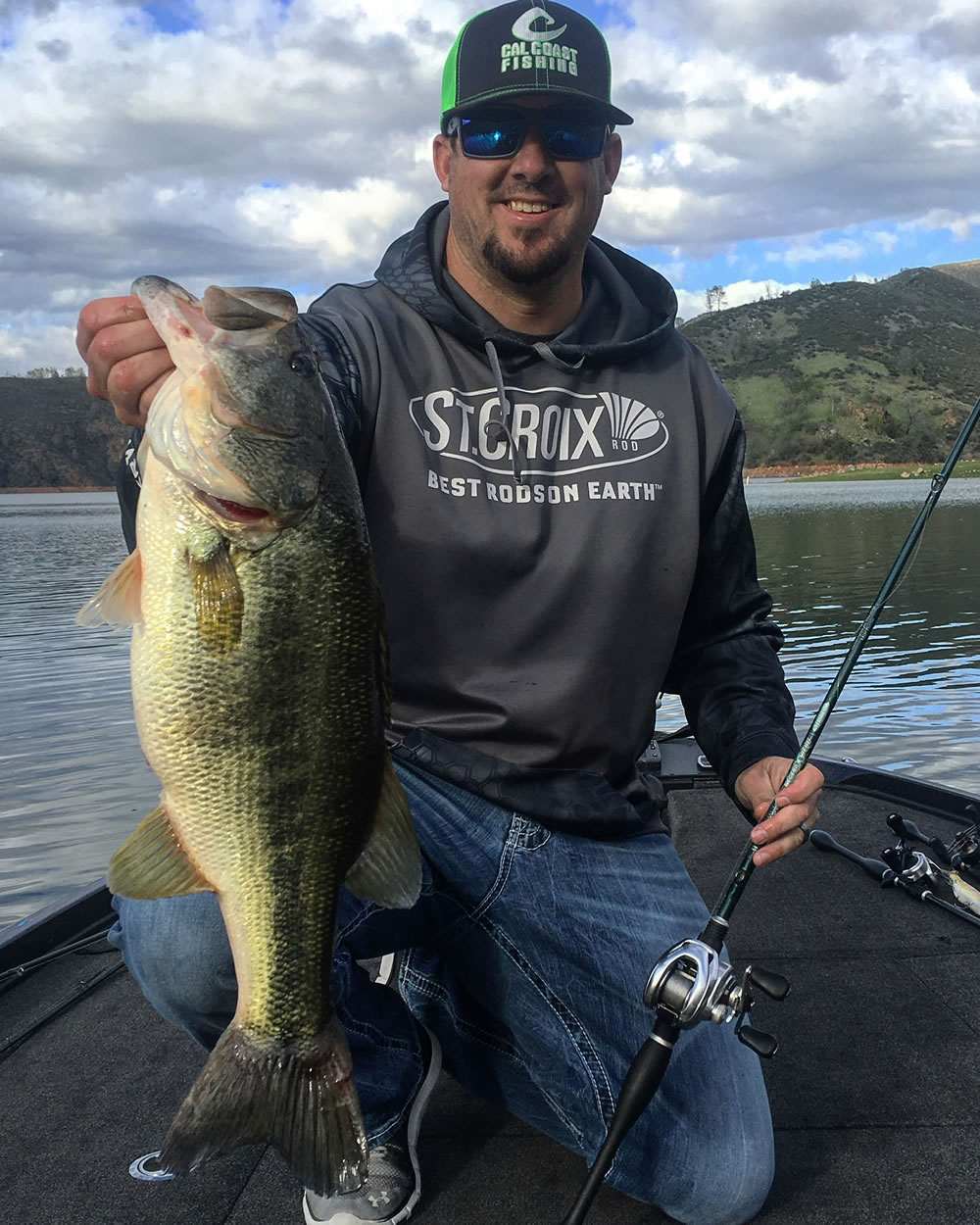 #CROIXGEAR
Like the rods? You'll love our lifestyle and accessories.
St. Croix Rods
If you have a press release that you would like to see featured on Lake-Link please contact us.
BITS & BITES
Advertise here
Advertise here
Please take a moment to visit our sponsors. Without them we would not be here.