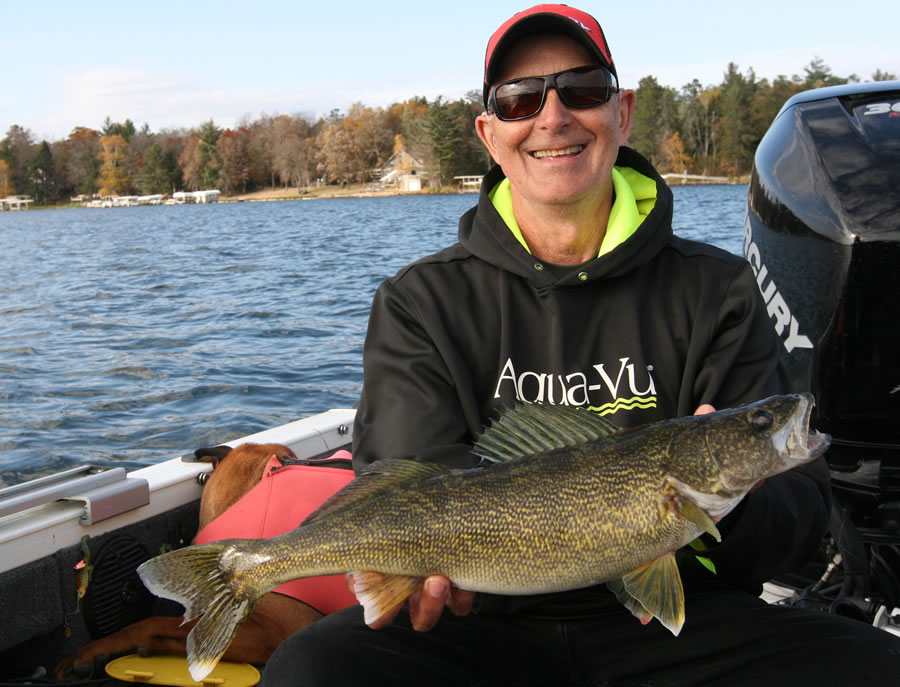 Crosslake, MN - He's known as Doctor Sonar, but for over a decade professional angler Bruce Samson has looked through the lens of an Aqua-Vu camera to boost his underwater intelligence. Now, the Central Minnesota fisherman is being recognized for his lifelong contributions to the sport he cherishes. One of seven legendary individuals inducted into the 2021 class of the Fresh Water Fishing Hall of Fame, Samson remains a passionate, inquisitive student of the underwater world.

Acknowledged as one of the nation's preeminent authorities in angling technology, Samson conducts educational seminars, on-water training, DVDs, online videos and articles teaching thousands of anglers around the world how to interpret their electronics and understand the mysteries beneath the surface. Punctuating his commitment to education, he has earned honors such as Top Teaching Pro on the Professional Walleye Trail.

During a recent day in the boat, the all-time great walleye pro recounted some of his fondest fishing memories... 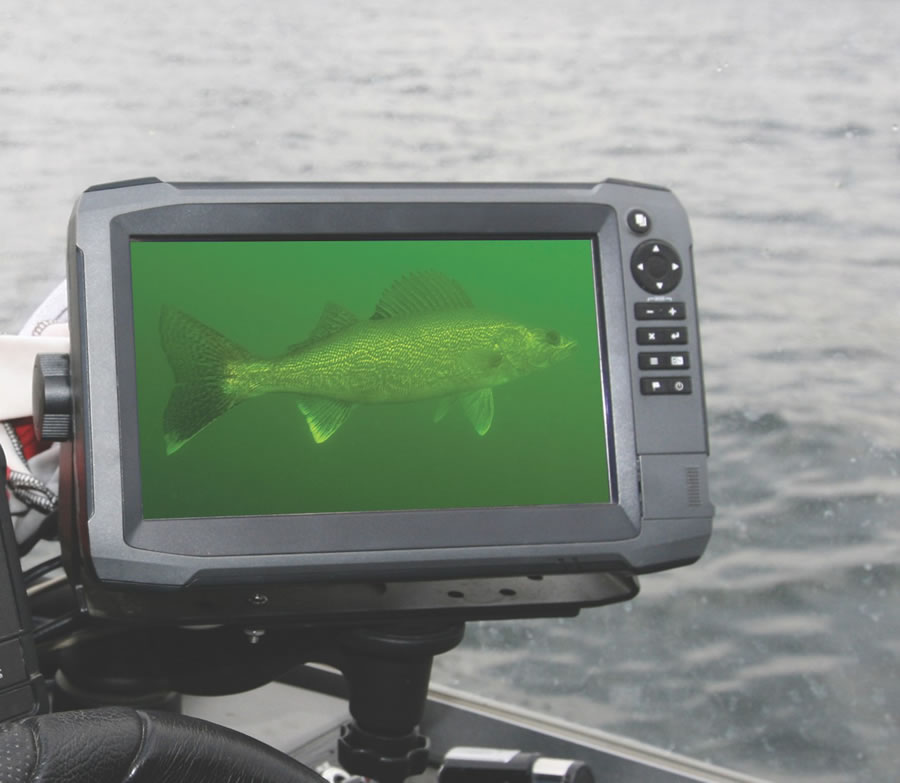 When did you quit your medical practice to become a professional walleye angler?

When I completed my medical education in 1976, I moved to Minnesota to practice medicine and go fishing. Fishing had always been my passion and in 1986, I fished my first MWC event. My partner Jerry Anderson and I won the championship that year, fishing the Missouri River at Bismarck, North Dakota. In 2002, after winning $300,000 at the RCL Championship, I knew it was time to hang up the stethoscope and go fishing full-time.

Tell us about that big 2002 tournament win.

I'd had really a tough first day on the Mississippi River. But I tried to maintain a positive attitude throughout the four day tourney, telling myself I was going to win no matter what. On the second day I needed a good fish to make the top 12 and reach the finals. Finally, I hooked the big one I needed. But it dove hard right under the boat and swam right toward the big motor. Nearly in a panic, I stuck my rod down into the water and somehow kept the fish out of the prop. Eventually, it swam further downstream and came up to the surface-seemingly too far away to reach with a net. My co-angler was a tall, former college football player who reached way out there and executed the most amazing net job I'd ever seen. That fish put me into the finals and helped me earn a big payday. Tim and I have relived that moment and that big fish many times over the years.

How did you become an authority on fishing technology?

I've always strived to drop my lure only where I knew fish were present. That meant relying on sonar and underwater cameras. It all started with an old Humminbird flasher. Once I realized I could differentiate between hard and soft bottom and see actual fish, I was hooked on sonar. My first computer graph was a Lowrance X15. It had a long complicated manual. So, one day, I hooked the unit up to a battery in my office and ran through the entire instructions, punching buttons and trying every setting and menu there was. I discovered a lot of interesting tools, so I decide to share what I learned by writing a series of six articles for the In-Fisherman Walleye In-Sider magazine. I found out when you write about complicated electronics, you quickly become an "expert." Which then led me to create a sonar-training DVD that ultimately launched my educational adventures.

Explain some of your pioneering work with digital lake maps.

Quite a few years ago, my friend Warren Parsons and I started making our own custom digital lakemaps, merging historical aerial photos with contours and accurate GPS coordinates. Eventually, we also added side imaging mosaics-or overlays-onto the cartography. Originally, you couldn't view these maps on a traditional sonar unit, only on a laptop computer.

I won a PWT tournament at Ottertail Lake, Minnesota, running a Panasonic Toughbook laptop in my boat with a map no one else had access to. Never had a single other boat on my tournament spots-small rockpiles in the middle of the lake. That's unheard of. Word got out about our maps, which we now sell for places like Devils Lake, ND, Bull Shoals, AR and the Mississippi and Missouri Rivers. 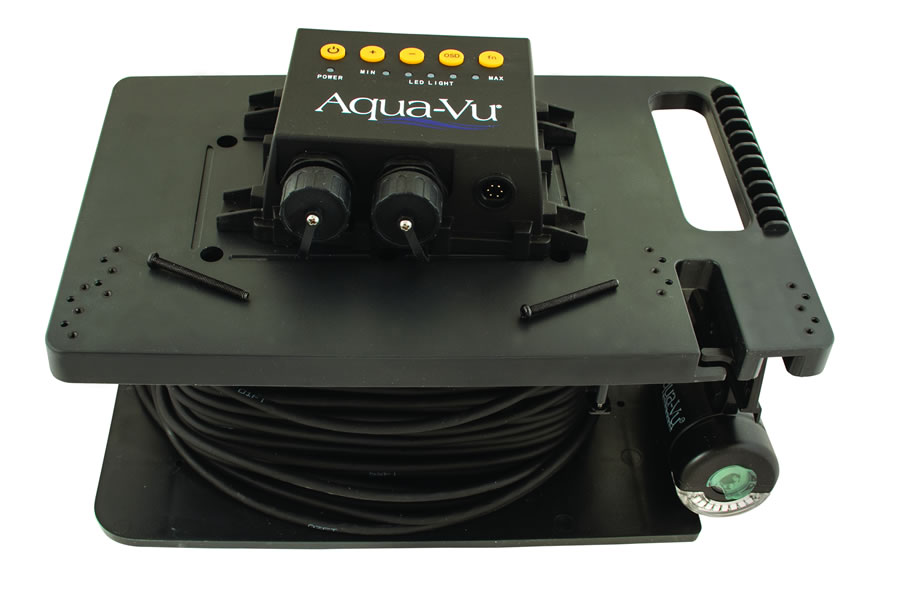 Why do you consider an Aqua-Vu an invaluable fish-finding tool?

It's really the best and only way to identify fish species with total certainty. I use the camera especially when I'm marking fish on sonar that don't bite. You can't believe how often you'll actually be fishing for carp, suckers or other fish you're not targeting. Sometimes, too, even your target species, like walleyes, just don't want to bite. Fish ID with a camera almost always solves the puzzle within a few minutes.

The Aqua-Vu is also the best way to find walleyes and other fish living in vegetation, brush, big boulders or timber. Drop the camera into weedbeds and you'll be amazed by how many walleyes, in particular, live there.

Is an Aqua-Vu helpful for interpreting sonar?

Even for someone like me who's looked at a sonar screen for thousands of hours, an Aqua-Vu camera remains one of the best teaching tools of all. For beginners, an Aqua-Vu is invaluable in helping them interpret their sonar screen. When you see a live visual of the lake bottom and can compare it to the sonar, side-by-side, your learning curve speeds up exponentially. 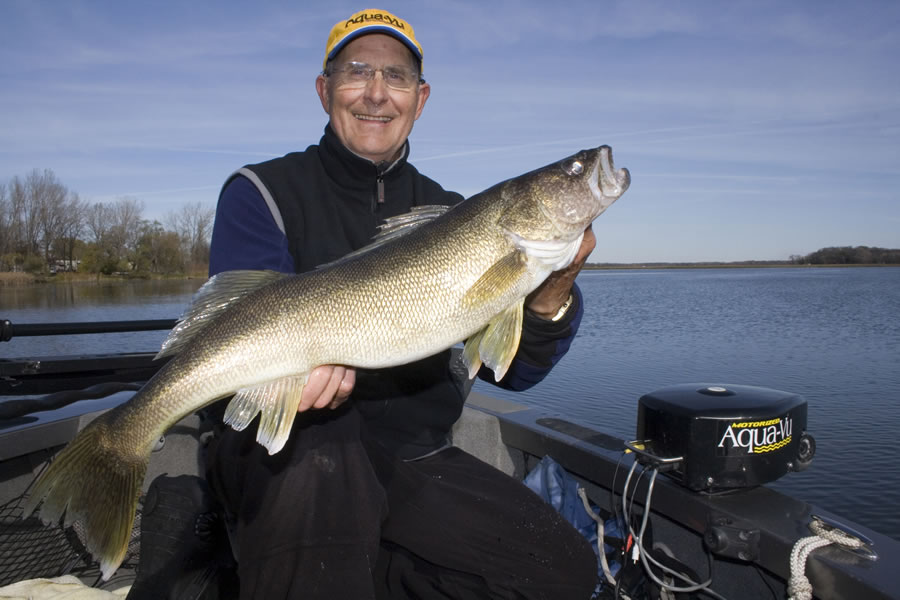 What are some of the more interesting discoveries you've made with the camera?

I've found that the ledges of supposedly soft mud flats can have super sharp drop-offs and ravine-like ledges that look like a mini Grand Canyon. Everyone thought these spots were flat and featureless until the camera showed otherwise.

Another little discovery is that fish like bluegills and smallmouth bass are actually attracted to the Aqua-Vu. They're curious about the lens. They'll swim over to inspect it and even follow it for many minutes at a time. When I'm fishing for bluegills, for example, I'll deploy the camera and leave it there and then fish right beside the lens. I can actually attract and hold a school of fish right on my side of the boat and catch fish after fish this way.

To read the rest of Doc Samson's story, click here.

Aqua-Vu
If you have a press release that you would like to see featured on Lake-Link please contact us.
BITS & BITES
Advertise here
Advertise here
Please take a moment to visit our sponsors. Without them we would not be here.