What situations dictate soft plastics over the real deal? Anytime the lure is presented to trigger a reaction. Could be a jig and soft plastic tail getting swept swiftly down stream on a river system where walleye won't have time to over analyze. Could be snap jigging through the edges of emerging coontail where the durability of the soft plastic make the angler much more efficient. Another common example is pulling crawler harnesses behind bottom bouncers where again the durability combined with the faster speeds that the harness is getting pulled create a situation where soft plastic begins to out fish live bait. 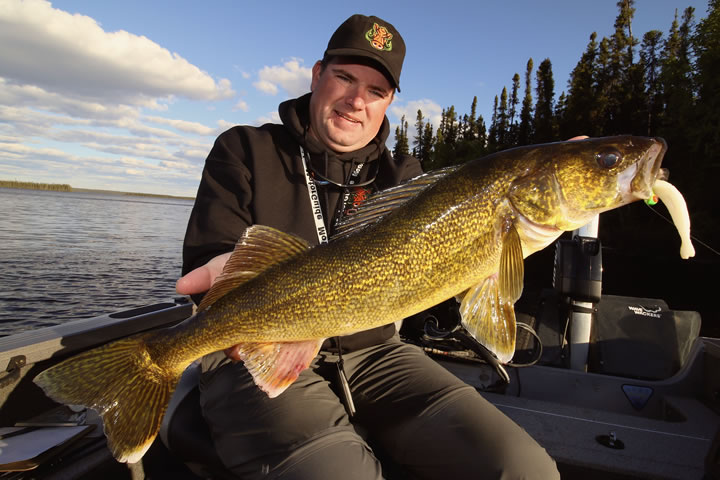 Besides durability, the other variables that can make soft plastics shine are the wider pallet of color offerings, the ability to change the profile and the increase in vibration. Many soft plastics also offer impregnated scents designed to attract fish and fishermen. In our view however, the profile, softness of the plastic and accompanying action or footprint is what makes soft plastics tick.

Water-soluble soft plastics offer another dimension to soft plastics. Water-soluble baits dry out in the air and retain more taste or smell. These baits typically don't have as good of action as many traditional soft plastics but the upside is that fish will often hold on to the baits longer. In fishing demographics where live bait has been difficult to let go (like walleye fishing and saltwater fishing), water-soluble baits like Berkley's Gulp! have become not only popular but also effective.

The next trend we see developing has been right in front of us for an awful long time. Pork Rind has been used to tip bass jigs forever. Before the explosion of soft plastic products over the last twenty years, most bass anglers tipped both spinner baits and jigs with pork. Over the years, pork kind of disappeared from the forefront of the fishing scene but we still had a few souvenirs like the phrase "jig and pig" which began to morph into something that wasn't quite so much pig.

Pork trailers were a closely held secret amongst a few bass pros particularly late in the fall when water temperatures dived or after severe cold fronts and the fish had a case of the lockjaw.

The durability and effectiveness of pork rind like Uncle Josh however is starting to spread. This past season, this old iconic company in the bass world reformulated some baits for walleye anglers and the effectiveness of the new Uncle Josh "Meat" Series of walleye baits has been impressive.

"Fish hold on to pork for a long time," explains veteran walleye angler Jason Mitchell who hosts the popular outdoor television program Jason Mitchell Outdoors. "The action is subtle but lifelike, really reminds me of a strip of belly meat. You won't get the intense vibrations that you will find with soft plastics but for slower and more subtle presentations that traditionally favored live bait, the Pork Meat is much more effective," states Mitchell.

Why or how could pork be anything close to being as good as live bait? The durability is the answer. Live bait; say a shiner or night crawler is typically good for one fish. Tip with soft plastics and you might get up to half a dozen fish before you have to replace. The pork is so durable that you can catch over twenty fish before having to replace.

"I have been using the Pork Minnows in the three inch size a lot for tipping jigs where I traditionally used a minnow on both lakes and rivers and what is incredible is that it just stays on through the course of the day so I just don't ever have to mess with rebaiting. In fact the more chewed up the pork gets, the better it seems to work," explains Mitchell.

The new Uncle Josh Pork Meat products like the crawlers and minnows shine for tipping on jigs or tipping crawler harnesses. The product comes in a sealable bag, which makes transporting and storing these baits easier. The durability and number of fish that can be caught on one piece of pork makes these baits much more economical than expensive live bait or even soft plastics. So often with fishing, some things come full circle. With a few new profiles married to bass fishing's dirty secret, walleye anglers have an effective new tool that can help them catch a lot more fish.