Walleyes On The Rock

By Dan Durbin - June 19, 2015
The Rock River in Jefferson County gets a ton of pressure. It does so because it is one of the closest rivers to the metro-Milwaukee area that has a fishable population of walleye AND because it can be pretty darn good too. 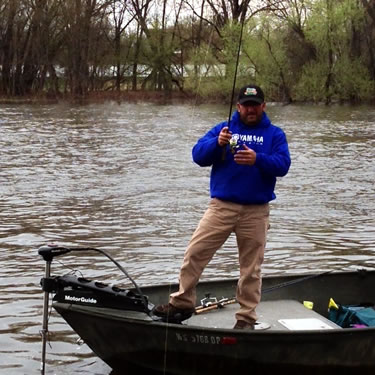 One guy that has been fishing the Rock since he was barely in his teens is Tommy Kemos- one of the most successful walleye pros on earth.

"The Rock can be a really good fishery," he said. "But it can be pretty tough at times too. The system gets a lot of pressure but it still keeps churning out fish."

Any check on various social media sites will quickly alert people when the Rock is open in spring- and people pound it from the bank, but once the early run is over the buzz dies off and the river isn't nearly as popular.

But still, these are fish to be had. "The cat fishermen will start hitting it pretty hard after the walleye run and do really well," Kemos said. "But the walleye just don't disappear. Yes, many of the fish will go out on Koshkonong and can be caught by trolling but there are still fish in the river all year long." Kemos said the river holds fish because it has the deepest water on the system. Still, that doesn't mean a person can just go fish the deep holes and go home with a limit- especially in the summer. "It really does get tough after the run," he said. "But, when you have new water enter the system the walleye will turn on. Any time you get a good rain is when you can find fish in the river. You need that current to get things going."

Kemos will work various holes with a Kalin's Vertical Stalker jig and Uncle Josh Pork Minnows and Crawlers or Kalin's Sizmic Grubs. Many times in colored water people overlook natural colors. Kemos' go to is actually the K-shad which represents most bait fish in the system, shad in particular.

"In the morning or late evening I won't go right to the holes," he said. "I may fish and small flats adjacent to the holes first. I'll get fish on the grubs when they are shallow. As the sun begins to penetrate the shallow water late morning I will switch to the holes. Sometimes I bounce in between the shallow and deep always keeping an eye on my Garmin electronics. The river itself isn't overly wide so you can spot check various depths quickly."

Kemos said the system offers good eating fish and as a bonus, a great fishery for families, too.

"It's so close to metro-areas so families can come out after work for a few hours and get into some fish," he said. "Even if the walleye are finicky, there are always other species that will cooperate. The catfishing can be great and is easy to do. Crappies can also be had in good numbers as well as white bass."

If things simply aren't going in the river then Kemos will head out to the lake and troll.

At first glance Koshkonong does not look like much, it is relatively featureless. There are times when the fish are roaming around on schools of bait, but Koshkonong does have a lot of subtle contours that Kemos likes to concentrate on. We are talking 6 inch breaklines. Any place that you find a significant break, it usually represents gravel or rock bottom. Kemos will troll shad patterned cranks when the water on the lake is dirty. However, after a few days of stable weather the water will clear up and then a PORK crawler on a harness is tough to beat. Kemos prefers the Great Lakes Crawler, but recommends being flexible and experimenting with other colors also.

The Rock River offers a rare blend of easy access and quality fishing that is hard to come by. Don't make the mistake of only fishing during the walleye run- there can be fish had all four seasons.