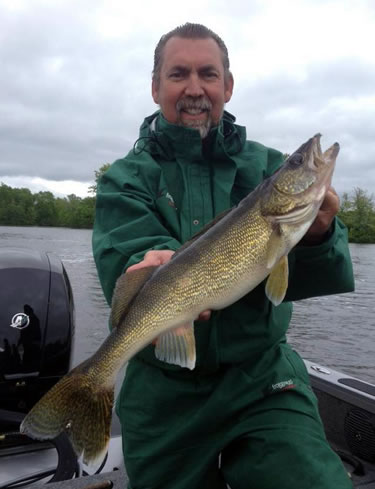 Fishing with planer boards has become a popular technique over the past decade. It offers fisherman a way to cover a lot of ground in the hopes of getting a fish to strike. Typically a pattern is developed and that then puts fish in the live well.

Most fisherman report a standard presentation of distances behind the boards. A fisherman first starts out by varying the distances of line behind the planer boards to locate the depth at which the fish are actively feeding. When fishing deeper water an experienced board captain places his longer leads behind the boards on his outermost or furthest board from the boat.

This typically prevents the inside lines from getting tangled when checking the outer lines. Another trick of the trade is to release some line from the inside boards until they have fallen back far enough that you can reel in the outside boards without interference.

This is presentation is all fine and dandy if you are fishing a basin lake where planer board fishing was basically invented. If you are fishing a break line this technique does not work as you will have lines at various depths across the break. Fish, especially walleyes relate to structure rather than depth and if you have all of your lines at the same depth you are missing fish.

In setting up to fish a break, the fisherman needs to know what the depths are that he is working within the coverage of his boards.

The boys and I decided to work a break recently and ran a pass through with all of our lines at uniform depths. We started with only getting strikes on the lines further out in the lake. Initially we thought maybe it was a color thing. Our outside board closest to shore went back and I grabbed the rod. Whatever it was felt pretty decent and it seemed as though it had a good head swag to it.

I handed the rod to CJ and he finished reeling it in. The line stayed down making us think we had a nice big fish. As the leader came out of the water and Austin got the net back, we all busted out laughing realizing that it was not a fish. but an old fishing pole. The Dora the Explorer model was picked up off of the bottom telling us our baits were not where we wanted them to be but were dragging bottom. We picked up the other two rods on that side and found them fouled with weeds.

We picked up all of our lines and started the 'run' over. This time we adjusted our depths on the boards closer to shore so that they were diving to a shallower depth, one that did not drag the bottom.

The results were almost instantaneous. We were busy on both sides of the boat and started to pick up not only some nice walleyes but a mixed bag of other species as well that kept us entertained.

On one end of the spectrum we had lures in roughly 12 to 14 feet of water and were fishing deep divers 80 feet behind the boards. On the other side of the boat our baits were between 5 and 8 feet of water and we were fishing 35 feet behind the boards. We varied our presentation based off of the two outside boards and played around until we were catching fish on each set.

There are some definite restrictions to this manner of fishing. First and foremost a good electronics system is in order. A lake map that is absolutely accurate in depths is not going to happen, so following a successful GPS line is of greater importance. It may pay to do a little pre-scouting before your initial set up to determine the subtleties of submerged points.

If there are weeds present and there typically are on the shallow end, you will be busy checking lines until you are able to set your lines at the right depth. Even if you are catching fish, it is a laborious endeavor as your depths will invariably change under the boat as you travel.

You can only travel in one direction and if you are fishing a lake like Winnebago you will need to pick up your gear at the end of a 'run' and start over, this again takes effort and time but the dividends can pay off greatly.

Unfortunately for us, we were fishing on a morning where the wind and rain picked up and kicked us off the lake. Fortunate for us we were staying nearby at the Wolf River Resort where we got to clean our fish in the comfort of cleaning house. We dried off, cleaned fish and had a delicious fresh fish fry in our cabin.

Do not be afraid to fish the shoreline when fishing with planer boards and vary your depths based off the contour of the bottom of the lake, it will put more fish in your livewell.