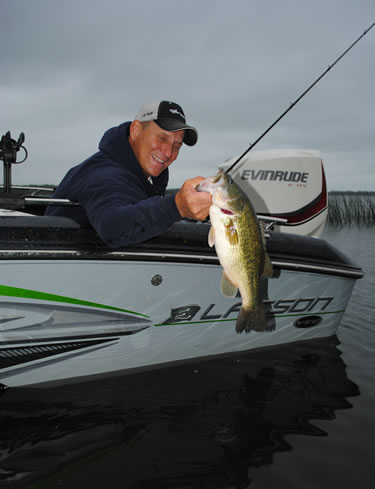 When we go out in the morning, we need to have a plan. On this day, our plan is to chase walleyes, and we're going to start with jigs. After an hour or so with minimal action, we switch to crankbaits. Crankbaits aren't working either. At this point, a "walleye fisherman" would try live-bait rigs or slip-bobbers or something like that. Walleye fishing is tough on this day and a slower presentation might be better, but, here's where the "Just a fisherman" philosophy kicks in. Instead of beating ourselves up trying to catch walleyes, let's just try to catch something. Most people who are "just fisherman" prefer to catch a bunch of crappies or bass or northern pike or whatever instead of not catching any walleyes.

Different species of fish behave differently. Often, when one species isn't aggressive and willing to bite, another species will be. For instance, after a weather front goes through and the air temperatures have dropped and the sky is clear, walleyes might go into a bit of a funk and not be interested in eating. That's when northern pike become the target. They seem to like those conditions for eating, or at least they seem much more willing to play along than walleyes do.

Some fish don't seem to like to bite when the sun is shining, but smallmouth bass do. If you're on a lake that has a good smallmouth and walleye population, consider chasing walleyes early and later in the day, and smallmouth at mid-day. Chances are you'll catch a lot more fish, and for most of us, that means a lot more fun.

Crappies are another species of fish that like low-light most of the year. Get after the crappies early and late in the day, and if they don't want to bite at mid-day, chase something else.

By the same token, don't get hung up on one technique. Sometimes fish of any species prefer a slow moving bait, other times they like something going faster. If you know you're on or around fish, but they won't eat what you're serving, serve something else. Then again, this is one of those times where, if they're being too picky, you'll probably be ahead if you just switch to a different species of fish.

If you're in a fishing tournament, you're usually limited to fishing one species of fish, and if you're a tournament angler, oftentimes when you go fishing you want to practice fishing for the fish that you chase in tourneys. But if you're like most of us, you go fishing just to feel something tug on your line. If you keep the things we just talked about in mind, you'll feel those tugs a lot more often.