Kayak Coho... Reaching Past A Cast From Shore

By Justin Blanchar - May 8, 2015
Planning ahead is important to the success of any fishing outing. For the weekend warrior with time constraints, it is even more imperative that preparation "rituals" are strictly adhered to. While batteries can be recharged, rods relined and tackle reorganized, there are variables beyond our control that can crush time on the water. One of the most devastating things for a busy weekend warrior angler is a miscalculated weather forecast. This is quite common during the spring of the year in the Midwest due to extremely unpredictable weather. As a kayak angler, it is even more important that the weather cooperates, especially if one chooses to chase aggressive coho salmon off the shores of Southeastern Wisconsin. While many smaller motorized vessels are capable of handling 2-3 footers, conditions need to be awfully stable for yak anglers to feel safe on the big pond. Having the ability to fish just beyond the distance where shore anglers can reach often gives the kayak angler an edge. 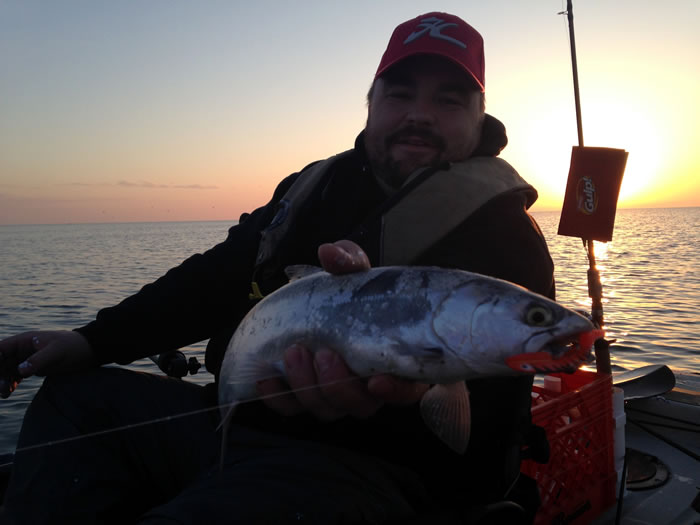 In a recent trip, plans fell into place perfectly. Weather patterns stabilized and were predicted to last through the end of the week. By Friday, conditions were perfect. The evening before, I secured my Hobie Outback to the roof of my vehicle and set the alarm early to allow plenty of travel time. As a beginning kayak angler, I felt it extremely important to fish with another angler for safety reasons and to improve my technique. Fortunately I was able to connect with an incredibly experienced angler, Rob Wendal - aka "Great Lakes Kayak Angler." Rob religiously spends time on Lake Michigan chasing fish by kayak from Northern Illinois up to Milwaukee. I couldn't think of anyone better to guide me onto some tasty spring cohos. As I pulled up to my destination that morning, I couldn't help but smile as the sun began to illuminate the glassy water of Lake Michigan. A full mug of coffee in the belly, a breakfast sandwich down the hatch, a great night of sleep; I was starting to feel like I was in a dream. Rob and I carried our vessels to the lake and as we were about to push off, a small salmon starting jumping within 20 feet shore. It was pretty hard not to take a few casts towards the splash! 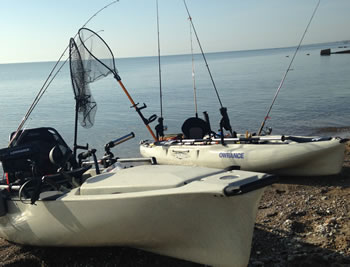 Once launched, Rob immediately began trolling to our destination while I worked to adjust my kayak's mirage drive foot pedals. No joke, within 30 seconds of Rob having his line in the water: fish on! Rob hooked up with a perfect eater coho on a ½ oz Tommy Harris orange tiger Echotail tipped off with a green Kalin's grub tail. The outlook for the trip was looking extremely promising! The day before, Rob had limited out in a short time and I was pumped! To make a long story short, our morning slowed as the sun continued to rise. According to Rob, the water temps had cooled off a few degrees from an overnight wind shift from the west - water temps were holding around 46 degrees. In addition to cooler temps, the clarity of the water had improved from 5-6 foot of visibility to 10-12 foot of visibility. Coho become a bit more skittish with clearer water making it difficult to get them to commit into striking. Other boats around us were also struggling and I overheard one group state that they finally hooked after shutting off their trolling motor - more evidential support of the wary clear water concept. Working through water in stealth mode was key in successfully landing fish that day.

The softness of a kayak gliding through water was part of the equation. In addition to being stealthy, having the right equipment to make long "dive-bomb" casts was also essential. Making long casts started with having quality rod. The day before the trip I picked up a 6' 6" St. Croix Avid X spinning reel from Dick Smith's Bait & Tackle in Delafield, WI. My thought process being that it would be less of a struggle to land a fish solo, from a kayak, with a shorter rod. As an added bonus, the Avid X is designed with a micro-guide platform allowing for smooth line flow on the cast, allowing for maximum distance. 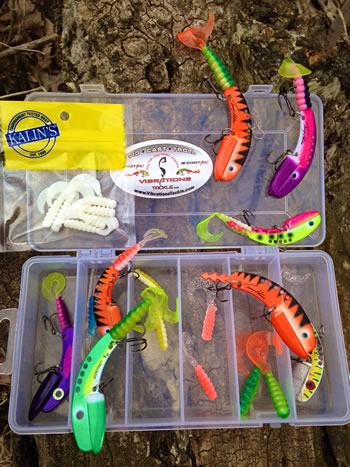 Fishing from a kayak can limit the ability to get a full backswing as the cockpit is in such close proximity to equipment such as fishing rods, landing nets, safety flags and rod holders. These obstacles often limit mobility depending which direction a cast is desired. A slightly heavier spoon or blade style lure is ideal due to its ability to load the rod like a whip on a short back swing without much effort. The small thin weighted profile is extremely aerodynamic allowing the lure to cut through the air whether it's windy or calm. Acme Spoons like the Kastmater and Little Cleo are great choices when targeting any species of salmonid on Lake Michigan. Another option is the ½ oz and ¾ oz Echotail blade bait as it creates a tremendous amount of ruckus with its tight intense wobble. The back of the hybrid Echotail blade bait has series of metal barbs which makes it easy to change out soft Kalin's soft plastics and even pork tails. This unique innovation allows anglers to quickly experiment with different colors until the fish are patterned. You can also utilize different fishing techniques with spoons and blade baits - both are excellent for trolling, casting and vertical jigging.

Since space is limited in a kayak, anglers must be creative in choosing lures that can be utilized no matter what depth fish are in. Acme Spoons and Echotail Blade Baits come in a variety of sizes and weights designed to reach the water you are targeting. The Plano 3640 holds lots of metal and fits perfectly into the floor compartment of the 2015 Hobie Pro Angler Kayak. In terms of color selection, Rob recommends lures that are orange when targeting spring coho. In addition to using metal, Rob casts and trolls crank baits such as the #7 Flicker Shad and Brads Thin Fish. Both of these lures can be found at Lake Michigan Angler in Winthrop, Illinois. As water temps start to climb, Rob also trolls orange flashers and flies behind his kayak.

Fishing for spring cohos from a kayak is an extremely enjoyable experience. The convenience of not having to depend on a nearby boat launch to gain water access is a huge advantage when angling on Lake Michigan. Boat launches are often a long distance from where anglers desire to fish. With many municipalities offering public lake access, kayak anglers have an edge when targeting coho that are beyond a cast from a shore. For a delicious coho recipe click onto the following link and watch as professional fisherman Captain Eric Haataja prepares his favorite family recipe. https://www.pinterest.com/pin/518899188292574509/

Justin Blanchar
Justin is the innovator of the Echotail®. He is also the founder and part owner of Vibrations Tackle, LLC . From the time Justin was a young boy, he cherished fishing with his Father and two Grandfathers on Lake Waubesa in their hometown of McFarland, WI. For many years, Justin was infatuated by the versatility of the blade bait due to the simplicity of how the lure functioned along with how fish respond to it. In the winter of 2008, Justin was inspired to develop lures by close friend Gary Lehnherr who was extremely skillful at creating homemade musky baits out of wood during the winter months. Justin didn't know much about wood-work, but became interested in metal work. After extensive research and guidance from his skillful father-in-law, he learned how to manipulate metal into a profiled fish lure designs. In December of 2010 he drew an new idea on a napkin that would soon be known as the most versatile hybrid blade baits known to date on the market. His development has since changed the way many anglers have viewed one of the most underutilized lures in the fishing industry Aside from business, Justin strongly values spending time with God, Family and Friends.
TRENDING DISCUSSIONS
Advertise here