By Bob Jensen - March 31, 2015
Across the Midwest, walleye anglers are getting into boats and waders and are chasing walleyes. Jigging is perhaps the most popular way to catch walleyes this time of year. Jigs are popular because they're effective. Following are some ideas for using jigs to catch walleyes in rivers right now. 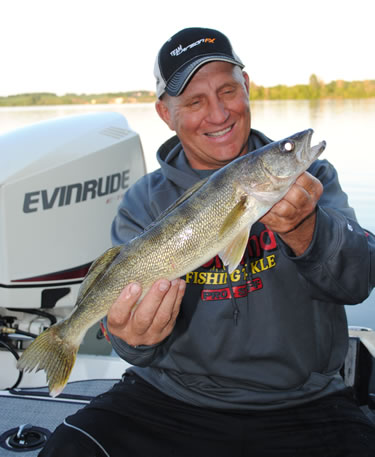 Most rivers throughout the Midwest are currently low and clear. Minimal snowfall this year means minimal run-off. In many rivers the walleyes are holding in deeper holes. As soon as we get some rain and the waters dirties up a bit, the fish will really start moving. For now, there are a couple of things to keep in mind.

With the clear water, the fish can be kind of spooky. Early and late in the day will often be when the bite is the best. Cloudy days can also be good. A warm day is preferred. Warm days with stained but not dirty water can provide outstanding action.

Walleyes will eat minnow-shaped stick-baits this time of year, but jigs are probably the best way to go in most rivers. A slow moving jig will be most appealing to the fish, but in some rivers there are just too many snags to allow for a real slow presentation. It's best to swim your jig just above the bottom, ticking the tops of the rocks, but not falling down into them. Sand and gravel bottoms will be where most of the walleyes are, and it's easier to work a jig slowly closer to the bottom when fishing over sand or gravel.

Much of the best action in smaller rivers will be in four to six feet of water. When the current is low, go with a sixteenth ounce jig. When the current increases, go heavier. A too light jig will be quickly washed downstream and won't be effective, and a too heavy jig will get snagged more often. Sixteenth and eighth ounce jigs will be the most used in most rivers.

If you're tipping your jig with a minnow, tie on a jig with a short-shanked hook like a Fire-Ball jig. Put the hook in the minnow's mouth and out the back of its head. The minnow will stay on the hook better when hooked this way, and it will be a smaller presentation, and smaller presentations are usually best this time of year.

Another good way to catch spring river walleyes, especially when they are more aggressive, is with a jig tipped with plastic. When using plastic, you'll want a longer shanked hook like a Slurp! Jig. A three inch Impulse Swim'n Grub is a good choice for plastic, and so is a four inch Impulse Ringworm that has been shortened a bit. The Grub has a larger profile and can be better in water that is more stained. Whether you're using live or plastic, keep the bait swimming slowly just above the bottom.

Remember that the fish will usually be facing upstream. For this reason you'll want to cast across the current and a little bit upstream so your bait moves downstream in a natural manner.

If you're wading and the water is clear, work slowly. Fish an area completely before you move to a different casting position. Minimal movement will reduce your odds of alerting the already spooky walleyes to your presence.

Line is an important consideration. For the ultimate in sensitivity, strength, and invisibility, tie a twenty inch, six pound test Sunline Super FC Sniper fluorocarbon leader to some ten or twelve pound test SX1 Braid. You can almost feel the fish looking at your bait with this set-up.

Ice-fishing has been fun the past few months, but now it's time to get on a river and catch some walleyes. If you keep these ideas in mind, and if you're on a river that has walleyes, you will get bit.