Adapting to Conditions Is Part of the Game

By Jerry Carlson - April 5, 2015
As we drove into the lot at Island View Lodge on Rainy Lake in northern Minnesota, it only took a moment to realize this was going to be a different sort of walleye trip for our group. Instead of being greeted by the serenity of the landscape, we were greeted by sandbags and huge pumps spewing water from behind the makeshift dam.

It was somewhat disheartening to know there would be little in the way of "normal" fishing. Our milk-run of hotspots that characteristically hold fish in the month of July would be useless. The high water and cold water temps meant we would be starting from scratch. Before we embarked on our initial voyage onto the water, our eight anglers from four boats huddled together for a quick strategy meeting. We each agreed to head in a different direction in an effort to locate some walleyes and start putting together a pattern.

My partner, Charlie Simkins, and I opted to work some shoreline structure relatively close to the resort. We believed the high water was going to keep fish on shoreline patterns and off of the deep reefs. Our strategy proved to be viable as we found numerous walleyes on a point that had never produced fish before.

We also quickly learned that it was pretty much a minnow bite. Leeches and crawlers did attract some attention, but minnows presented on live bait rigs or jigs were by far the preferred bait.

As the sun settled on our first day and we began our evening fish fry, we had ample time to share stories and discuss future strategies. Everyone had found and caught fish, but we all agreed it was going to be a very different year. 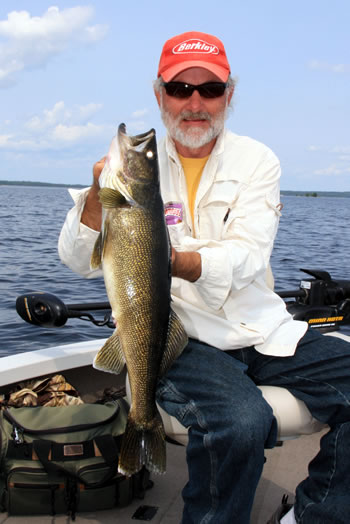 There are a couple of thoughts that need to be emphasized about this trip. First of all, having a group of people working together greatly reduces the learning curve for all. Four boats can cover water quickly and eliminate unproductive locations. By pooling knowledge, multiple boats can identify similarities in structure that tend to hold fish. Working together is extremely valuable and a huge time saver for all.

Something else to consider is the fact that the incredible walleye population found on Rainy Lake isn't going to leave because the conditions are different. They will continue to do what they always do, namely play the wind, find the food and eat!

As an angler, it is our job to pick apart the choices walleyes have for eating. If a person can locate and follow the baitfish, the walleyes will not be far away.

During the week we were also able to take advantage of the deep water in some of the typically shallow bays. Although the northern we caught were not trophies, cabbage beds and submerged docks held fish.

Of all of the fishing trips I have been on, I have never found two to be exactly the same. There is always some unusual twist in the conditions or change in the weather that makes location patterns iffy. For that reason, anglers need to be able to adapt to the conditions they are presented with.

I often think of fishing as solving a puzzle. Being able to figure out a body of water and catch fish is a very rewarding experience. Too many times I see anglers continuing to fish in a manner that is not producing results. If your strategy is not working, change it.

Catching fish is always a great thrill. However, finding the fish is frequently just as much fun!