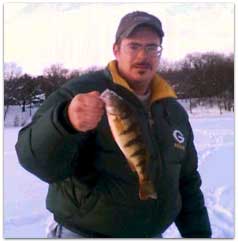 Tight lips, covert movements, trying to blend into the surroundings, swearing those who know to secrecy - you might think these are the signs of some special forces team. Nope, these are the signs of a hard-core perch fanatic. The only problem is that none of these attempts at concealment will help once people realize you're fishing way off in No Man's Land because you're catching fish. Catch perch and there's no hiding it. Once word gets out on a new perch hotspot, the crowds will come. Like miners during the gold rush, they all set out to stake a claim, digging holes everywhere until they strike gold.

As we like to say: Ice makes bank anglers of us all. It's on this level playing field that the real dyed-in-the-wool perch anglers stand out. Go to any of the great perch spots in Northeast Wisconsin and you'll see the same guys out there day after day catching fish; even when the majority of the pack is complaining of a tough bite. If you want to join the group that leaves the ice with a limit more often than not, then it's time to consider some changes in your way of thinking. Marketing has its four Ps: Product, Price, Placement and Promotion. Because we're trying to persuade fish to bite, this system works for anglers too.

First, we have a product, the bait that we are trying to sell to the often-finicky fish. Next we have a price, our investment in equipment and bait that often determines how we fish. Then we have placement, the actual location of out spot and where we put the holes. Finally, we have promotion, the way we present the bait to the fish.

When the schools of fish are thick like they often are at first ice, it's usually of little importance how you fish as long as you get into an area that perch are moving through. As the ice gets thicker and the fish see more and more of the same old thing, you need to think about the four Ps and how you can change your methods to improve the bite. One great way to learn when changes are necessary is to take along an underwater camera. There's no more of an intriguing way to fish than to have an underwater viewing system giving a perch's-eye view of the bait and more importantly the fish as they respond to it.

During a hot bite, fish are fighting for a place at your table. Neutral or negative bite and all see is fish, often many fish, doing nothing more than eyeballing your bait. Then the camera reveals them swimming off, leaving you holding the bag or in this case the bait. Don't despair! We're here to help you make the transition from a perch bite observer to an active participant. For many it means changes, some subtle and others not so subtle.

To solve the first "P" requires you to have a selection of baits. Many fishermen in the annual perch wars come armed with a pail of minnows. Great bait for a good bite. Some carry along a container of grubs, variety can be the spice of life and add some fish to the bucket. But if you're going to tempt neutral fish, it's going to be small, smaller, smallest. This means carrying along a couple dozen maggots. Known as spikes in proper company, these tiny baits presented as part of a balanced system will usually turn a slow day into a productive one.

Finding the right presentation for the fish's level of activity is a key to a lucrative day on the ice. Carry a variety of baits from minnows, waxworms, mealworms, maggots, mousies, finesse plastics and any other local favorites. By no means are we suggesting that you should carry all of these baits, but try to keep a couple options on hand so you have something to fall back on. Selecting the right bait is a critical decision for a hot day on the ice, although it's not your decision to make, the fish will tell you what it is, you just need to know how to ask. To understand why a specific bait or lure produces better at any one time you need to understand the fish's mood swings. Fishes' moods range from active-aggressive "Let me at 'em" feeding to a neutral-passive "If it's there I might eat it" feeding to a negative "I'll just stand back and watch" type attitude.

The single most influential factor on fishes' moods has to be weather. As the mercury drops, so does the fishes' ambition as it slips toward the negative end of the scale, but when temperatures are on the rise, the action gets hot. Even at cold temperatures, fish will begin to feed more after a few days of stable weather, although a higher stable temperature will still make fish more active than a colder one.

The second "P" is price. This is one that applies to every fisherman out there. How much should we pay for equipment and how much of it is actually essential to success? There is no standard answer to this one; you have to settle for the equipment you can afford. But that doesn't mean you have to settle for so-so success. You just need to put a little extra consideration into your purchases. For instance, you've grazed through the fishing section at your favorite retailer and are contemplating that new jigging rod, but you also have a somewhat limited selection of jigs in your tackle box. If you want to maximize your success on the ice pick out a small jigging spoon and a few different styles of jigs. Sure, you might have to make do with a moderately good rod, but you can pick that up off the spring clearance racks in March. For now it's better to have a fully loaded arsenal. Even an old weapon is deadlier when loaded than the newest high-tech arms if you can't afford ammo.

The next "P" in this total perch sales pitch is location, most places finding perch isn't hard, finding good numbers of quality fish is. One of the most important things to remember is that although perch relate to structure and attracting features like feeder streams, perch are a fish of the flats, roaming like packs of wolves. Look to meet up with these ravenous fish on sand and mud flats adjacent to drop-offs, points, reefs, mouths of bays and feeder streams. That should put you on numbers of fish, but fillet-sized perch can be tougher to put your thumb on. Perch usually school according to size, so if you start catching lots of small fish move, unless you've noticed that the schools come and go as fish roam the flats. 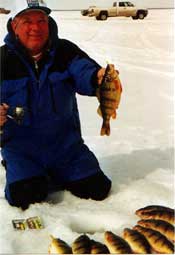 The final "P" is the big one - presentation! Even more than bait selection, your presentation must be matched to the fishes' mood to taunt the aggressive fish and appeal to the negative fish. The fastest way to find the most effective presentation is to start with a highly visible, preferably flashy and reflective search lure to ring the dinner bell and bring them running. If this attracts fish, but won't trigger them into striking, try adding a small jig a few inches above the search lure. Neutral fish attracted to the flash of the search lure will focus on the jig, which triggers strikes due to its subtler motion. Because most fish feed upwards, placing the jig above the lure is more productive than hanging it below, which is the conventional method.

Mildly aggressive fish can be both attracted to and coaxed into striking with small jigs tipped with live bait. Quiver jigs and standard marabou jigs work well for this because of the slight 'breathing action' of the body material, even when held still. To add to the attracting qualities of jigs, bounce them up and down on the bottom to create a puff of silt, which brings nearby perch running to see what all the commotion is about.

For neutral fish, a small minnow suspended below a correctly balanced float is a deadly combination. Add enough shot to sink the float until just the tip protrudes above the water and you'll have the most sensitive strike indicator on the ice. For totally negative fish, there is no approach that will put more of these tasty nuggets in the pan than a tiny plain hook (size 12 to 18); with only the minimal amount of shot added about a foot above the hook. The slowly sinking bait will appeal to all but the tightest-lipped perch.

This should give you a jump in the right direction when you head out to strike your own claim, helping you strike it rich and stash away a cashe of these tasty little nuggets in your freezer.

Jon Rasmussen
Jon Rasmussen is a native of Menasha, Wisconsin but his job as a U.S. Navy journalist has taken him all over the country. His work has appeared in Midwest Outdoors, North American Fisherman and Badger Sportsman. Jon is also a Wisconsin editor for Midwest Outdoors and member of the U.S. Match Fishing Team, participating in national and international events.
BITS & BITES
Advertise here
Advertise here
Please take a moment to visit our sponsors. Without them we would not be here.