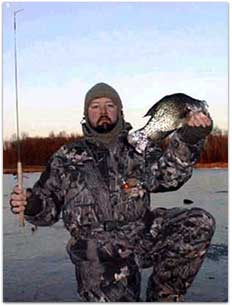 I find it odd, noticing how little we realize the enjoyment that we derive from the little things in life, especially when it comes to those at the end of a line dangling below the ice. Panfish are probably the most sought after fish through the winter months, but few fishermen really cater their tackle selection to the tastes of these often-finicky fish. Although sometimes easy to catch, panfish can be connoisseurs of tackle, crowding in a tight circle around a bait, watching it, knowing that somehow it is food, but also that something isn't quite right about it. Finally, driven more out of competition than hunger, fearing that one of the others in it's group will get the tidbit first, one fish darts in, hovers an inch or so away and inhales the bait. However, the morsel that has been hanging there barely moves, the thick line attached to it and the bulky Styrofoam bobber above anchor it where it is.

Perhaps the fish will try again, maybe it just swims away, but the point is that an opportunity was missed. If the angler above saw anything, he probably saw his bobber twitch a little, thinking he had a "nibble" he paid close attention, after the fish was gone, unless of course the fish gave it a second go at the bait. Often, I think that the vast majority of panfish caught through the ice are caught because of competition for food in this period when food is scarce, rather than because they scrutinize the bait and decide that it is totally natural, they just nab the bait before another fish gets it.

A new era in ice fishing has begun, as we take all the little gadgets that make our boats so productive through the summer months and haul them onto the ice. GPS, flashers, digital fishfinders, highly mobile portable shanties and other odds and ends have all found their niche on the ice, along with many new products designed specifically with the ice angler in mind. One of the most influential new toys out on the hard water has to be the underwater cameras that are now becoming widely available. These viewing systems offer anglers a look into another world, allowing them to monitor the fishes' reaction to their bait and different jigging techniques. I've learned more with the camera in just a few trips than I did in a whole season on the ice before. The opportunity to coordinate your jigging with the fish will be a boon to your success. Why then, with this wealth of technology available do many anglers still use out-dated tackle? 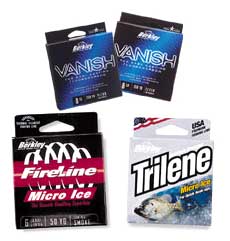 Although six or even eight pond test line may cut it through the summer months, to put a significant amount of panfish on ice you'll have to go lighter, four pound max, although I rarely use line heavier than two pound test for panfish. At the very least add an 8-10 inch leader of light line before the hook. This can be a necessity because clarity of lakes naturally increases throughout winter due to the fact that lack of sunlight decreases the density of plankton along with the fact that the wind and waves no longer stir up sediment from the bottom and suspend it in the water column.

In general, both you and the fish can see much better now and decreasing the thickness of your line will dramatically improve your success. Don't be tricked by those "superlines" that claim an ultra thin diameter, thin as they may be are still much more easily seen below the water than ordinary monofilament due to the fact that instead of being transparent like mono, they're opaque, which means in clear water they stand out like a sore thumb. These superlines do have their place though, in dense weed growth, they blend right in with the weeds and if an over-achieving scrapper decides to go on safari, the thin line will slice right through the weed stems as you pull the fish back out. Keep in mind that the breaking strength of the line can be less than the weight of the fish you're after. Take for example 4lb test line, it breaks when there is about 4 pounds of force pulling on the line, as in lifting a 4 lb weight in the air, but underwater, fish are almost weightless. That means that the only force exerted on the line is that of the fish pulling, when it gets too high your drag should kick in, protecting the light line. This allows you to use a line weight significantly smaller than the weight of the fish you're catching. The line will snap however, if you try to lift the fish from the water with the line, to prevent this and put more fish on the ice, use your ice skimmer as a ladle to scoop big panfish from the hole and flip them out onto the ice.

Bobbers, or better yet, floats are a staple in every ice fisherman's bag of tricks; much more so than in the open water season. These little brightly colored strike indicators lend themselves well to the hard water season. When properly weighted, floats are a deadly approach for any species. Because wind and current play minimal parts during the ice season, the only variables in float selection are depth and bait choice. Both factors are pretty much cut and dry, for shallow water use a fixed float, for deeper water use a sliding float. Bait choice influences the size of the float and how sensitively it is balanced. For lively baits such as a minnow, you'll have to take off just a little weight to make the rig more buoyant, the minnow should be able to pull the float down an inch or so occasionally, but if weighted as sensitively as the same rig should be for grubs, even a crappie minnow would be able to swim off with the float. For more information on floats and float fishing go to www.mickthill.com.

Ice jigs, those small, globs of lead in an eye-popping array of colors and designs, are a wonderful tool, most of the time. Ice jigs bring attention to your bait with their flash of color and motion, but on a tough bite they may be just too much. In this case you'll want to go with a plain hook and little or no shot to weight it down right by the hook. This will give your bait an extremely slooooow fall, giving wary or shy fish a chance to inspect a naturally-looking, naturally-acting presentation. More often than not your bait won't make it to bottom when there's fish around. When little fish abound though, ice jigs will allow you to have weight right on the hook to help it drop down through the clouds of nibblers faster, so that it will get to the bigger fish in one piece. I'd also like to note here that de-barbing jigs and hooks before using them will make them easier to remove with cold hands, do less damage to your bait, and give you a faster, more solid hookset without losing more fish. Some people file the barb off, but I prefer to just pinch it down with a pliers. This leaves a slight bump on the hook that helps to hold the bait against nibbling fish.

Popular ice baits include maggots (known in proper company as spikes), waxworms and minnows for perch and crappies. These old standbys will almost always catch fish, but for actively feeding fish it's hard to beat some of the new finesse plastics. Noodles, Wedgies, Shrimpos and Ratsos have become my favorites, with the Custom Jigs and Spins Shrimo jigs being my first string bait followed by the wedgies for shy fish. These jigs have amazing action built into them, you can't hold them still, they just look alive. 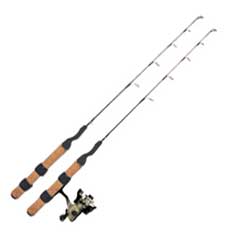 Over the years it's been proven that at times fish can be pulled through the ice with just about anything, although still true, a small ulrtalight rod and small spinning reel can work wonders, especially in deeper water where using the hand over hand method on line can get messy. There are two major elements to keep in mind when choosing a rod, length and action.

Length is nothing more than a balance between personal preference and space, obviously for those taking advantage of a warm shanty a shorter rod would be required than could be used outside. Commonly found rod lengths for fishing inside include those in the 22-28" range, while rods used outside may go up to 40" or more.

The action of the rod depends on what type of presentation it will be used for, those who take advantage of Wisconsin's three-line limit often jig with one line and rig the other two as "deadsticks" meaning that they're set to the desired depth, placed in holders and left to do their thing except for the occasional twitch from the angler or wind.

For the jigging rod a fairly fast action is preferable because it gives the angler a more solid hookset and increased sensitivity. The deadsticks on the other hand should be of a softer, slower action. This allows the wind to impart more action to the bait and has a bit of give when a fish takes the bait, allowing the rod to keep tension on the line until the angler arrives.

What it all boils down to is that you just have to out-smart the fish, and they can be downright geniuses sometimes, these techniques will add points to your Fish Vs Fisherman I.Q. on any water almost any time. I feel though that I must apologize ahead of time, for giving you all the extra hard work, you know, carrying that heavy bucket all the way back to shore.

Jon Rasmussen
Jon Rasmussen is a native of Menasha, Wisconsin but his job as a U.S. Navy journalist has taken him all over the country. His work has appeared in Midwest Outdoors, North American Fisherman and Badger Sportsman. Jon is also a Wisconsin editor for Midwest Outdoors and member of the U.S. Match Fishing Team, participating in national and international events.
BITS & BITES
Advertise here