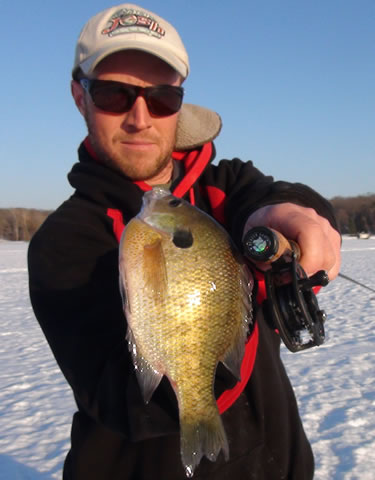 December is a great month! Everyone seems to be full of holiday cheer and ice starts to accumulate on our lakes. I love Christmas, but it's the hard water part that fills me with excitement! Early ice is a great time for catching panfish, but should certainly be approached with caution. Most years there is fishable ice somewhere in southern Wisconsin by the week after Thanksgiving. Look for small, shallow, weed filled backwaters off of larger bodies of water, particularly those sheltered from prevailing winds as these protected areas promote quicker ice production. Often these spots have walkable ice while the main lake still has open water. Many of my December hotspots are the same places I target after ice out in the spring for bluegill and crappies. I'm not sure what exactly draws panfish to spots like this in early winter, but in my experience, the large schools that gravitate here are usually willing to bite when presented the right offering.

Once you discover a potential early season ice fishing location, find a friend to join you and never go alone. Wear a lifejacket (if you don't like the extra bulk, get an automatic inflatable) and pack a 20+ foot rope for each angler (preferably tied to something that can easily be thrown to someone in distress such as a bucket or throwable floatation cushion). Safety spikes around your neck are definite must, as is a spud bar to check the condition of the ice. I always pack a change of clothes just in case I need to get out of wet ones - luckily I have not needed them but they are there. As for angling equipment, pack light just in case you do end up on the wrong side of the ice as gear is expensive to replace. I carry a hand auger and a Beaver Bucket Station loaded with a couple rods and a small assortment of jigs and bait. The Beaver Bucket Station is a six gallon bucket with two Beaver Grips that secure rods or tip-ups (up to six) to the outside so there is space to carry other equipment, or even minnows, in the insulated interior of the bucket. Perfect for packing light, the Beaver Bucket Station also doubles as a seat.

Before embarking on an early ice expedition, it is important to recognize that ice conditions can change quickly, and fishing might not be possible. I once drove 2.5 hours only to walk twenty feet off shore, punch a hole, and head back home because of sketchy ice. That's just the name of the game in late November and early December, you have to be willing to walk away because no fish is worth the risk of not making it home. When planning your trip take into consideration that morning ice is usually stronger than in the afternoon because of midday warmth and the radiant heat of the sun's rays - a half an inch of ice can make a big difference! When you are lucky enough to find ice that meets your safety standards, I urge you to constantly check thickness as you venture along looking for fish. Scan the surface of the ice looking for lines and spots that look different as these usually indicate different freeze times. Waterfowl and springs can keep water open longer and these spots can have significantly thinner ice. Avoid really thick weeds, shallow rocky areas, and places affected by currents as these can also drastically reduce ice thickness. Avoid narrow openings that connect backwater areas (shallow bays, marinas, channels and sloughs) to the main lake at all costs because they are affected by current, no matter how little you think it may be, and it reduces the integrity of ice. 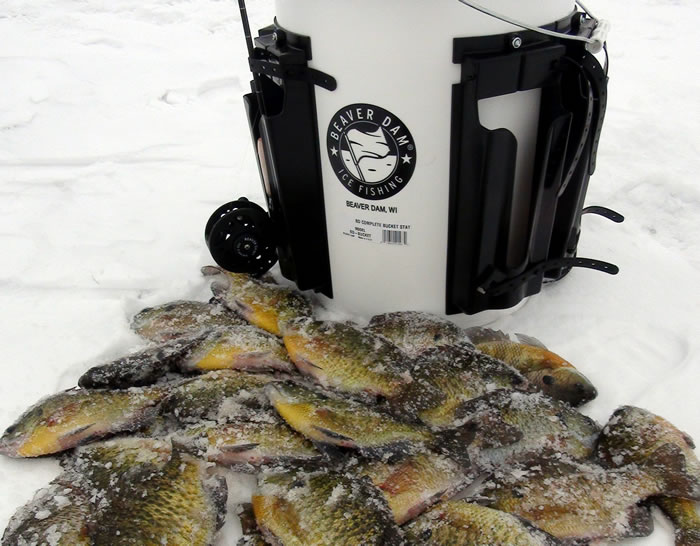 Late November and December ice is usually clear and this makes it easy to find weed beds and clear pockets within them, but it can also make fish spooky. Small patches of snow or cloudy ice spots can act as cover for fish and are always worth checking. I used to always drill holes and fish my way through them until I located fish - owning an Aqua-Vu Micro has greatly changed my strategy though. As long as the water I am fishing has some visibility, I can locate fish much more efficiently using my camera. I'll drill a long string of 20-30 holes, set my auger down, pull my Aqua-Vu Micro out of my pocket and head back through all of the holes looking for large concentrations of fish. I mark promising holes by kicking together a pile of slush that my auger pulled up and then I can go back and hit the good ones with my rod or drill more holes around the "fishy" spots. This year when everyone else was wearing orange and sitting in a tree on opening weekend I was out wacking gills and crappies on a lake in southern Wisconsin. The nice thing was with the thin layer of water on the ice, I was able to use my sonar to shoot straight through the ice without drilling to find fish - this rapidly sped up the fish finding process!

Once you have located the school the work is done and it's time for some fun. In the past I have opted to use my long rod for shallow water fishing but this year I have a new tool in my arsenal-the Beaver Dam Titanium Tip Stick! This combo has a ground breaking new design including a retractable titanium spring bobber that stores inside the rod blank when not in use. The titanium spring is indestructible and holds in place firmly both deployed and retracted thanks to magnets built into the rod tip. I had the opportunity to try it out just before writing this article and I loved it. The 23" Titanium Tip Stick Ultra Light Action is perfect for bluegill and crappie fishing when using Custom Jigs & Spins 3, 4 and 4.5mm Chekai Tungsten Jigs tipped with spikes or Pork MEAT Ice Leeches. The spring bobber on the ultra light model is extremely sensitive making it perfect for this application. The 29" Titanium Tip Stick Medium Action sports a stiffer spring which accommodates Kastmaster Spoons as well as jigging raps and I cannot wait to use it for perch and walleye later this season! The retractable spring on all the models make them a dream to store and greatly reduces tangles.

December also marks the start of angling on the North American Ice Fishing Circut. My first tournament of the year is the 2014 NAIFC Series Championship, December 20-21, on Mille Lacs Lake, Minnesota (teams qualified for this event based on last year's season standings). The team with the heaviest sack of panfish, a combination of sixteen bluegill, crappie or perch each day, takes home the gold rings and a check for $10,000! Fortunately all of the species on Mille Lacs love Chekai Tungsten Jigs tipped with Uncle Josh Pork Meat Leeches. Bluegills and crappie inhale 3mm Chekai Jig with just the small segment of ice leech in both red and purple. Perch on the other hand prefer the 4.5mm Chekai tipped with an entire chartreuse 2" pork meat leech. Another product I am extremely excited about for the upcoming tournament season (and fishing in general) is the new Aqua-Vu WiFi. This underwater camera wirelessly connects to your smart phone and allows you to see what is going on at your hole. Imagine the possibilities - watch the action below your Beaver Dam Tip-Up from the warmth of your shack or leave a previously good panfishing hole that slowed down to try somewhere else, periodically checking your phone to see if fish moved back in. An app called Looking Glass uses cutting edge video enhancement software to clarify images previously distorted by low light or cloudy water. "Shadowy figures" are now revealed as fish and structure in the distance. With these tools at our disposal there aren't many excuses left for coming home empty handed!

Good luck and enjoy your early ice outings. I'll be chasing panfish across Wisconsin and gold rings in Minnesota. Be safe and stay on top!

Nick Smyers
Nick Smyers is a year-round tournament angler, targeting bass on open water and panfish through the ice. Nick has made five Wisconsin Bass Federation State Teams including being crowned State Champion in 2012. One of Smyers' highest achievements in bass tournament fishing came in 2009 when he was a BFL All-American Qualifier and took 2nd place at the TBF National Championship. Nick and his ice fishing partner Kevin Fassbind took 2nd place last weekend (January 26th 2014) in the the North American Ice Fishing Circuit Qualifier on Chisago Lake, MN. The team has seven top 3 tournament finishes since they began fishing the NAIFC in 2010 and earned 2nd in overall standings for the 2013 season.
TRENDING DISCUSSIONS
Advertise here
Advertise here
Please take a moment to visit our sponsors. Without them we would not be here.