Ice Fishing Over the Edge

By Mitch Eagan - December 1, 2014
Surface irregularities serve as a template for pinpoint hole drilling during early-ice

Landing a limit of fish through a hole is a lot like running a flourishing retail business - no matter what you're offering, success ultimately boils down to location, location... location.

"Close enough" won't cut it with fish or commerce. In hardwater angling, the exact position of your hole must often be reduced to mere inches rather than "somewhere within sight." 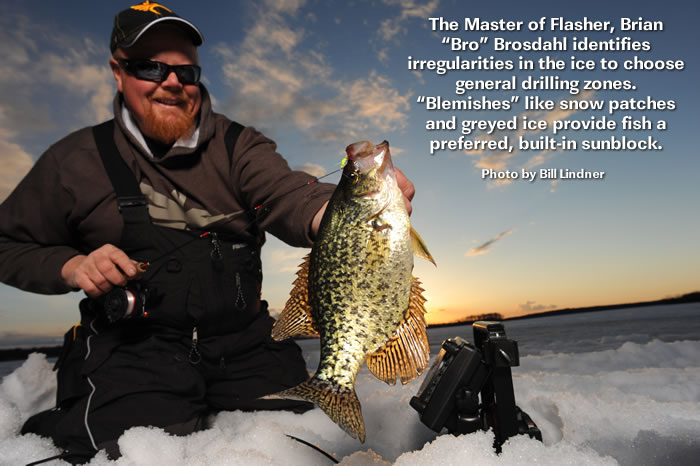 With that in mind, enter the guru of ice angling, Brian "Bro" Brosdahl. The Northern-Minnesota-based guide has been successfully taking clients fishing on frozen waterways for decades. And just like you and me, his customers, overall, just want to catch as many fish as they can without having to repack and relocate with any frequency.

On the whole, Bro uses two types of electronics to determine exact places to drop a line - a sonar/GPS combo and an underwater camera. But well before pushing the power button, the Grand Rapids resident identifies areas to cluster those holes by taking a moment to observe his surroundings, noting what the ice-covered surface is telling him.

Look before you leap

Overall, Bro Country, as his turf is termed, is snow country, and later in the season a lake's entire topside will be covered with a thick blanket of snow. This is when modern-day electronics and mapping programs play the roles of their lifetimes.

But before the flakes start to accumulate in feet versus inches, Bro aims for areas where the ice has formed differently than its surrounding facade, as well as where small patches of snow have amassed, especially when the ice is clear as a bell.

"There's a reason the ice has an unusual look to it in different places," says Bro. "Springs bubbling up from the bottom, a patch of still-green weeds radiating heat from the sun's rays and even a slight difference in depth are all possibilities. And all will attract fish throughout the season."

Right off the bat, Bro bores holes along the paths where clear ice butts up to white, heaves protrude from the flatness, cracks have been created and anyplace snow has piled. And when he checks each hole with his Humminbird ICE 688ci HD, sure enough, there's structure, or better yet, fish below. And in holes not created directly over cover, he confirms the presence of favorable structure and cover with his Aqua-Vu AV Micro 5 underwater viewing system.

"Anywhere light penetration is reduced overhead, even if there is none of the "classic" cover [weeds, wood and rock] nearby, fish will gather," adds Bro. "Think of it like a swimming platform or dock during the openwater season; here, more often than not, you'll find fish of all species hanging out in their shadows. The darkness overhead can be considered "structure", and it's where fish congregate, summer and winter."

The answer is clear

On lakes and reservoirs where little snow has fallen and clear ice covers the majority of the surface, Bro's initial holes will have a different look and feel about them.

It's in these holes Bro keeps his power auger running well after its point has protruded from the ice's underbelly, or when using a hand auger, will lower and lift it quickly it several times so that water is brought up out of the hole and onto the ice. Immediately following, he'll set up his Frabill flip-over and/or Hub-style shelter over what seems like a sloppy, slippery mess - but there's a method to Bro's madness.

"First, the slightly warmer, freshwater from the lake will quickly etch into the slick surface of the clear ice, causing it to cloud and reduce light penetration," Bro claims. "And the shanty, too, will create a shadow, and the most active fish around will eventually swim over and take shelter under my shelter." Clever…

Setting up these holes first lets the immediate surroundings calm down while the dedicated guide's out drilling another swath of holes, setting tip-ups and the like. And by the time everything's taken care of, he and his clients can quietly converge on the pre-erected shanty and start fishing. "Just keep as quiet as you can," warns Bro, "and keep your movement to a minimum or you will spook fish."

If you're looking to land a limit of fish early in the ice-fishing season, just remember to stop and take a look around before drilling that first hole. Features seen on the surface of the icescape will often tell you where to start. 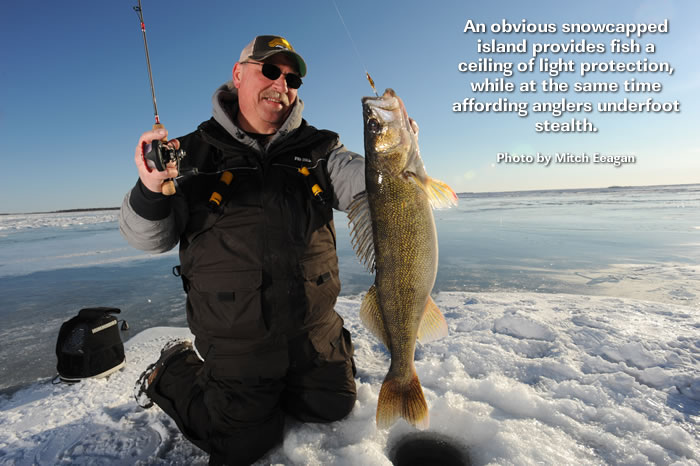 Mitch Eagan
Mitch Eeegan has a passion for teaching others about hunting and fishing via the typed word. The accomplished outdoor writer has spent years of merriment ripping smelt lips in Michigan's Upper Peninsula and other prolific smelty regions.
BITS & BITES
Advertise here