Catch A Bunch In The Fall

By Bob Jensen - November 1, 2014
I got to fishing again this past week. My friend Mike Gottheardt and I were chasing smallmouth bass on a river in eastern Wisconsin. We caught'em good: Lots of smallmouth and some nice ones. Nothing that would be considered a trophy, but some healthy bass that fought hard and jumped and were just fun to catch. The thing is, at this time of year, anyone can get in on some really, really good fishing. Whatever you want to catch, now is a good time to do so. If you want to have a walleye or a bass or a panfish put a bend in your rod, you can make that happen right now. Here's how. 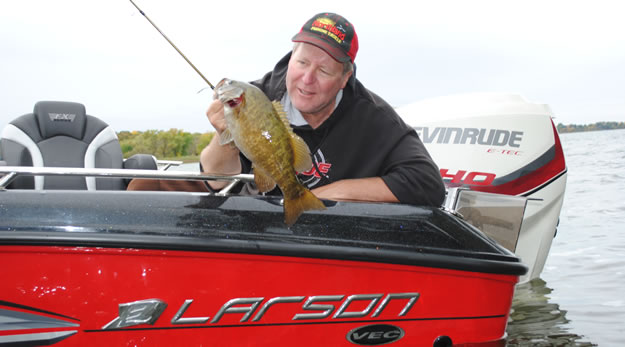 The thing to keep in mind when you're fishing in the fall is that, most of the time, the fish will be grouped up. I've had so many wonderful fishing trips this time of year when it was one fish after the other. It might have taken a while to find them, but once they were located, they were willing biters. At times they were shallow, other times they were deep. Nonetheless, when you're fishing in the fall, if you find the fish, they will bite. Following are some ideas on finding them, then making them bite.

I spoke with Mike on the phone a few days before we went fishing. He said that we would be fishing in a river and that the smallmouth had entered their wintering areas. They were in deep water, schooled tightly, and would bite a bait that was near them. I had seen this before on other rivers across the Midwest. And, Mike was right. We worked deep pools where the river made a turn, fifteen to twenty feet deep, and, when we put our baits where the fish were, they ate them. I've caught crappies and perch in lakes this time of year in deep water also. They gather in deep water and spend the winter here. If you put a bait near them, they'll eat it.

On the other hand, I remember one memorable autumn day when my dad and I were on a large Midwest walleye lake. The wind had been blowing from the same direction for several days in a row. We fished all the traditional walleye spots without much action. We were working a deep water spot that was close to the shoreline that the wind had been blowing into. For some reason, one of us cast a jig/minnow to the shoreline and got bit. We made another cast and got bit again. For the rest of the afternoon we caught walleye after walleye in three feet of water. Fun stuff!

Now, just like during the summer months, finding the food is the key to finding the predator fish. Now however, baitfish populations are lower than during the summer months and the predator fish are hungrier. Put your jig or rig in front of them and chances are good you'll get bit. This pattern will stay true until ice-up. I know that I'll continue to take advantage of this, and if you want to catch more fish, you will too.