By Jerry Carlson - September 1, 2014
Every year when goose season starts, I hear people talking about strategies that will help them defeat the wiles of the Canada goose. After years of trying to solve this problem, I have come to the conclusion that there are tactics that will put the odds in your favor. However, geese are geese and there are no guarantees.

One subject that always comes up in the early stages of the goose season has to do with the number of decoys that should be used. Many believe that during the first part of the season, it is best to put out a limited spread. 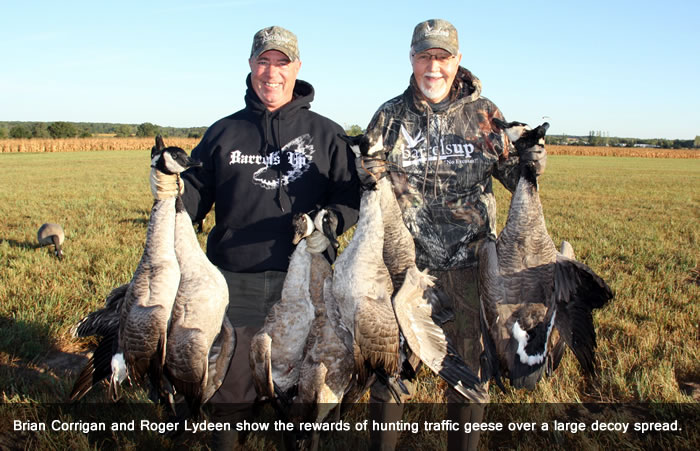 The theory here is logical. The geese are typically not flocked up in huge bunches in the early season and are still relating strongly to family groups. Smaller sets are thought to be more effective than larger ones because they mimic the number of birds the geese are typically seeing in a field.

I don't disagree with this. However, what happens when the limited number of birds that are using a field have been educated and the hunters have to rely on traffic birds for the rest of the day?

If my main goal is to attract traffic birds to my spread I will set out a goodly number of decoys. A big spread is more visible from a distance and has helped our group bring in "fly-bys" simply because of the impressive number of decoys on the ground.

One thing is certain about early season decoy placement. They need to be set in family groups of four to ten. Family grouping with adequate space between the groups is very important at this time of the year. Actually, family grouping works well for most of the season.

Another topic of discussion revolves around calling. Too many hunters overcall their birds. Geese are often not very vocal in the early season and may come in without a single honk.

If the birds area coming towards your spread and look promising, call only enough to keep them on track. Once they are on the deck, a few soft moans and clucks will finish them. Aggressive calling at this point will scare them away. 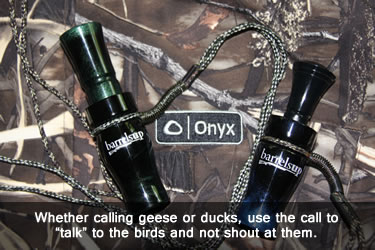 Hunters need to remember they are talking to the birds working their spread and not shouting at them. A vigorous display of competition style calling will cause more harm than good when the geese are in close.

Flagging is another issue for discussion. Some believe too much early season flagging over educates the geese and makes hunting in the later season more difficult. I believe that hunters need to do whatever it takes to get the attention of passing birds. If they are on track, keep the flags down, if not, flag up a storm to try and turn them.

Over educating geese early in the season is certainly something to consider. Like some say, "Don't show your "A" game until you have to."

On the other hand, I have always believed that hunters need to do what is necessary to be successful. If that means starting with my best card early in the season because that is what it takes, that is exactly what I will do.

Geese are geese. Some days they make it easy for us and some days they do not. Read the birds and adjust your strategies accordingly even if it means playing your "A" game early in the year.