By Jesse Quale - August 1, 2014
Ah...The good old blade bait. To many old timers, blade baits have been a go to lure during mostly cold-water periods. For at least 50+ years, angler's have been ripen blades from the Mississippi to the Wisconsin River. Blade baits have originally been thought to be used solely as a cold water lure in late fall and early spring. There are many blade baits on the market. They vary in many sizes, shapes, and colors. Many anglers like to present them below the dams in deep holes, while vertical jigging or ripping them off the bottom. Blades send off a large amount of vibration that attract fish from a long distance. Aside from vertical jigging, vibrating blades can be casted as lipless crank baits, and pitched along wing dams, rocky shore lines or steep breaks along the main river channel.

Over the past several years, we have found that blade baits are not just for cold water; blade baits can be used year round and in a vas variety of different techniques. In early spring, we like to jig blade baits in deep holes below dams, bridge pylons or on the main river channel. During this time of the year it's important to use a heavy enough blade bait to keep a vertical contact with the bottom as being worked in fast current. As the water temperature warms, we will start working blades a bit faster. Snap jigging, rip jigging and casting & retrieving in a slower manner can trigger fish to eat even during the toughest conditions. We have also found that these baits work tremendously in the summer as well. Recently I hooked into a 30 inch 11 lb walleye rip jigging a 1 oz Echotail blade bait off of a main lake point on the Wisconsin river. While blade baits are one of the most versatile under utilized lures on the market, there is 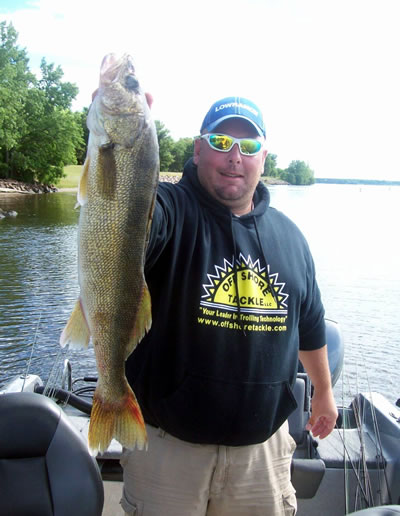 one that really stands alone as being at the top of the food chain. The Echotail is the only lure in the world that allows anglers to interchangeable soft plastic tail products. While most of the blades come pre-rigged out of the box with a Kalin's grub tail, we experiment with many other plastics already available on the market. A barb on the end of the lure functions as a bait keeper allows me to change plastics on the fly. This allows me to easily pattern fish with the simple switch of a tail. Being able to switch to a different color, style or scented tail product also allows me to present a profiled jigged to the fish, that they most likely have never seen throughout an entire day of fishing. Bright color blades and plastic is a must when fishing dark stained summer water on the Wisconsin River. The violent thump from the blade combined with the action from the twister tail is a deadly combination. Often times, I will also add some scent to the blade bait. This can really help to target all of the fish senses. The scent can act as a great additive especially during colder water conditions. My recommended scent is BaitMate. When I vertical jig or snap jig a blade bait, I like to use a 7 foot St Criox med action eyecon rod with 10 lb test fire line (no stretch) in high visible green. Green fire line works well for detecting bites. Often times, fish will strike the blade on the fall. The no-stretch line is more sensitive and allows for better feel vs. using a monofilament line. Also, many areas we fish in central Wisconsin are snagged prone wooded areas. Fire line works well to pull your baits out of these tough snags.

We also use blade baits throughout the winter months. Down sizing while working them in a slower jigging manner is the key. These work great on walleyes, panfish, pike and other game fish. We often times tip them with minnow heads, spikes or just use them bare. On the Wisconsin River when the crappies and white bass are on fire, I will drop the Mini (1/10 oz) Echotail to the bottom pop it up about 3-6 times. I will also spend time jigging above the suspended fish. Slowing jigging it upwards away from the suspended fish often forces a straggler to follow up for a strike. The initial vibration above their heads calls their attention to focus on a free vulnerable meal getting away.

The last few years on Green Bay, Petenwell, and Castle Rock flowage, we have also been trolling Echotail blade baits. The five line attachment holes allow for different vibrations to occur at different speeds. The back holes allow for a vibration to occur at a slower speeds (1.4-1.6 mph). We usually attach the line to the middle hole and move our way back at slower speeds until the blade starts vibrating. Water currents and boat direction can be a major variable in our set up. Trolling against currents allow for a more forward line-to-hole connection while trolling with the current often forces back line-to-hole attachment. The back holes forces more weight forward allowing for maximum vibration at slower speeds. The main goal is to maintain vibration. When the water warms during the summer slightly increase our trolling speed and connect to the front holes. The front holes have a nice tight wobble and cut clean through the water handling faster speeds (2-3 mph) without "blowing out." It's imported to tune the Echotail prior to trolling. Running the blade along the side of the boat is the best way to complete this task. If the lure is retrieving to the right, bend the tail to the left. The opposite applies if the bait is running to the left. Pushing the barbed tail end on a hard flat surface while holding the back end of the lure between our thump and index finger. This can be task can be accomplish without removing the tail. Faster trolling speeds in warm water conditions is a great way to trigger extremely aggressive fish such as walleye, pike and muskies.

Jesse Quale
Jesse Quale is the owner and operator of Green Water Walleyes Guide Service. Through his years of tournament angling, he has fished many different tournaments throughout the US ranging from FLW, RCL, MWC, WAT, WWA and Cableas NTC Championship. He has guided in Central Wisconsin my entire life. He is a full service guide and am at it year round. I do open water, ice fishing, turkey, waterfowl and bear hunts in central Wisconsin. He also writes many magazine articles throughout Wisconsin promoting the knowledge that he has learned through my years of tournament angling and guiding. His goal is to provide everyone with a safe guide trip, show them techniques and tips that he has learned throughout the years. He enjoys teaching to the young and old about new products on the market in the fishing and hunting industry.
BITS & BITES
Advertise here