By Scott Stankowski - August 1, 2014
On a typical late July day, fisherman are searching for cold water on Lake Michigan to catch fish. Boats are typically in the sixty degrees of water range looking for anything in the fifties. This congregates the bait and the fish and makes for some pretty intense fishing. Charter captains keep an eye out for where the water moves and are able to stay on top of the colder water and the fish to make their clients happy. Typically you are thinking fastball, when you should wait back on the slow curve.

This year that has not happened up and down the Wisconsin coast. Water temperatures have remained cold all year long and surface temperatures have stayed steady in the lower fifty degree range. The temps on the way down have also stayed in that range and fisherman are actually looking for an increase in water temperature to catch fish.

Typically boats are out to over 300 feet of water this time of the year and over 8 miles from shore. With the July we have had boats have stayed within the 130 foot line for the most part with many days trolling in as shallow as seventeen feet of water. The beaches even have been lifeless.

This water allows the fish to be all over the place both in distance from shore as well as the in the water column. Guides have been at wits end trying to find consistent patterns to it all. 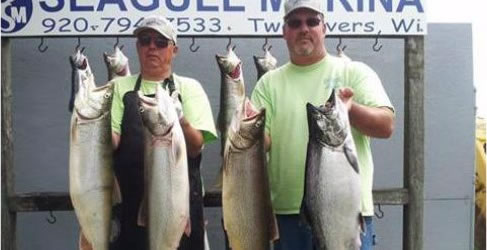 At the Seagull Marina in Two Rivers, all the guides typically work together to put their clients on the fish. I had a chance to talk with a few recently and being versatile and flexible seems to be the theme. Everyone I talked to said that they are just waiting for the fishing to heat up.

Teddy Bonde first mate of the Will E Bee has noted that there are plenty of fish out there.

“They are scattered all over the place, and trolling back over a spot typically doesn’t produce.”

Bonde also noted that some of the typical color choices in the past years are drying up.

“This year we have caught a lot more fish with spoons in the blues and purples, our go to oranges from years past are dead.”

Perhaps it has something to do with the shallower bite.

Other fisherman are mixing it up and heading to different areas. Captain Rob Steber of RN Fishing Charters has been fishing in areas that he hasn’t in the past. He has also been targeting lake trout on days that he needs to put fish in the boat.

On the day I was at the marina, most boats and charters were coming in with one to six fish. Captain Rob had 20 fish including some dandy four year old salmon and lake trout over fifteen pounds.

The key to the lakers is knowing where they hang out and slowing down. Instead of ripping through the water like a two seam pitch, they key is hang a bender to the fish. Typical speeds for salmon are 2-2.3 mph. If you want to catch rainbows you might even trip it up to 3 mph. That is twice as fast as the speed you want to hit up for Lakers. 1.5 mph is the number of choice for this sluggish fish.

Lake Superior is typically better known for a destination for Lake trout, but Lake Michigan should not be ignored. The fisheree is very healthy and making a great comeback. A lot of people also do not target the fish known as the ‘greaser’ due to its oiler flesh and slightly stronger taste. Fine with me and the boys as we prefer Lake trout. We consider it a delicacy just like those along the Superior coast.

Keep an eye on the reports and be ready for some increased action. As I always tell my ballplayers, think fastball and react to the curve to put the ball in play. If you want to hit it right on the lake this moniker holds true this summer.