By Jason Mitchell - July 1, 2014
Like many anglers, I learned how to live bait rig for walleyes with the bail open and my trigger finger on the line. At the first indication of a bite, the though process was to let line peel off the spool giving fish line so that they could swallow the bait. Anglers insisted that the less a walleye feels your presence, the better.

There are situations where giving to the fish whether it be by feeding line or pointing the rod tip back when either running live bait rigs or spinner rigs can be the ticket. Especially earlier in the season, the drill often seems to be creeping the rig along and feeding the fish momentarily before the hook set. 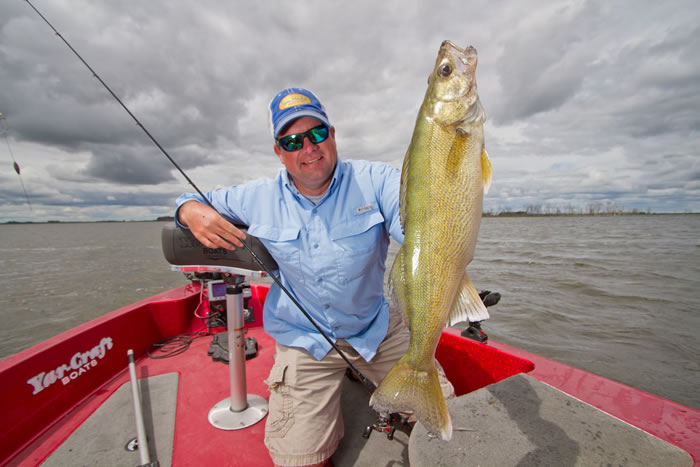 Dragging the fish is just that. No finger on the line with the bail open, no worry about the fish "feeling" the angler and no pointing the rod tip back towards the fish. When you get a bite, you simply let the rod load up and drag the fish along until you start to get a few head shakes. Ever had one of those days where the rod holder out fished you... when you were trying hard to catch a fish with the rod you were holding? I know I have.

I think what happens as fish get aggressive is that they simply grab onto the bait and just don't want to give it up if it seems to be getting away. When you drag the fish with steady and constant pressure, the fish just seem to keep choking up on the bait or harness until they hook themselves. This adjustment or change in attitude happens every summer. 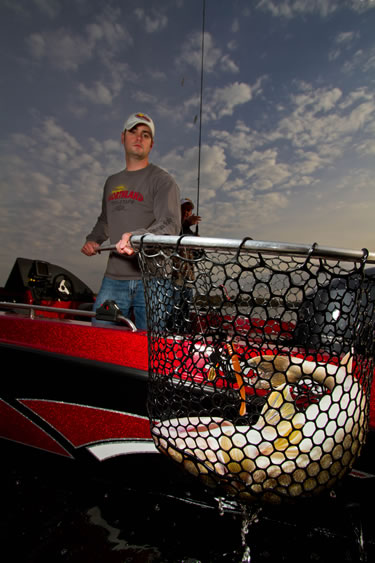 Earlier in the season, rigging with live bait can often be considered a finesse tactic. As the summer progresses, I often find that I catch more fish with a more aggressive mindset concerning live bait rigs... power rigging. I often use a heavier walking sinker or bottom bouncer that keeps the presentation close to the transducer of the sonar.

I like heavier snells, sometimes as heavy as twenty pound monofilament so that I can move really fast without the snell twisting up. I often move as fast as a mile and a half an hour but then drop my speed as I mark fish on the electronics. Once fish are deeper than fifteen feet, I feel that I will mark most fish that are below me. The name of the game is to scoot along fast until you come across another pod of fish. Once you find or mark some fish with your electronics, you can slow down and fish at speeds that might range between half a mile an hour to a mile and a half an hour for rigs and up to two miles per hour for spinner rigs.

Recently I designed a half crawler rig for Northland Tackle called the Crawler Hauler that also has a barb on the hook to keep the night crawler pinned in the right position.

As summer progresses and water temperatures climb, successful rigging for walleyes often begins to morph into something faster and heavier. Feeding and finesses is replaced by dragging and loading up the rod. I often switch from a medium light spinning rod action to a bait casting rod like our Jason Mitchell Pro Walleye Series JM701MC as summer progresses because it is easier to set the hook by just sweeping the rod with the wrist. Be conscience of these different mentalities and rigging options and get comfortable on each end of the rigging spectrum because these adjustments will allow you to keep on catching as the summer wears on.