A Game Plan For Summer Walleyes

By Bob Jensen - June 1, 2014
The summer of 2014 has finally arrived. Lots and lots of anglers are taking to the water in search of their favorite fish, and for many of those anglers, their favorite fish is that guy with eyes that glow, the walleye. In most areas walleyes are done spawning and are setting up their summer patterns. There will be lots of ways to catch walleyes, but let's take a basic look at catching them in the summer months. 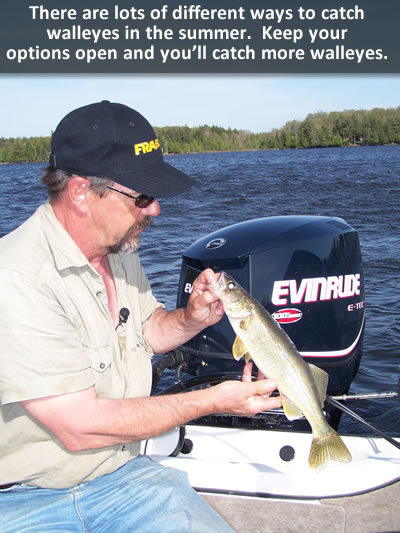 Right now, from early June until the weather gets really warm, jigs will catch walleyes. More and more, we're tipping our jigs with Impulse Paddle Minnow plastics. These baits can be fished fast, and as the water warms, walleyes will respond to fast moving jigs. Fish these baits along weedlines or shallow structure near the areas where the walleyes spawned. Rig them on jigs designed for plastics. A jig with a long shanked hook and a keeper, something like a Rock-It Jig or a Gami UV Jig are good choices. This is not a subtle presentation: You've got to give jigs with plastic lots of action.

As the water warms a switch to spinner rigs is often a good idea. After that first week of extended warm weather, spinners really take off on some bodies of water. A sign to watch for is when the surface of the water gets covered with plankton or whatever those little green beads of vegetation are. This provides an umbrella that reduces light penetration and makes the walleyes bite. Pull spinners over rocks or flats or wherever there are baitfish and you'll quickly know if walleyes are present.

This is also a good time to troll crankbaits. Crankbaits allow an angler to cover lots of water quickly and walleyes really like them. The new 4.5 Rattlin' Hornet has been really good so far this year, and the tried-and-true #5 Hornet is a very reliable fish-catcher also.

As summer progresses, a quick approach continues to be good, but there will be times when a slower presentation will be best. If you're seeing fish on the sonar, and especially if they're tightly grouped, a live-bait rig will be maybe the best way to go. Once the fish are found, put a live-bait rig with either a leech or a crawler down there and make them eat it. If you leave either a leech or a crawler, and sometimes a minnow wiggling right on a walleye's nose, it's almost always going to get eaten.

In the past few years we've been using a Puppet Minnow in this situation also. Puppet Minnows were mostly designed for ice-fishing, but what walleyes eat under the ice, they'll also eat in summer. If the water is deep enough to vertically jig, and you've found a group of walleyes, don't hesitate to drop a Puppet Minnow down there and pop it a few times. If they don't eat it, go to the live-bait rig.

Keep in mind that during the summer there is a lot of bait in the water. The young-of-the-year perch and shiners are now getting to a size that the walleyes will eat, so you are competing with other things to get the attention of the walleye. However, the walleyes are hungry and want to eat. If you give them what they want, they will eat. The fun is figuring out what it is that they want.