'Stick' It To Bass This June

By Dave Lorier - June 1, 2014
I have been a high school science teacher for the last ten years and recently became the adviser of our school's fishing club and coach of the bass fishing team. Talking about fishing is a great way to get to know kids, and eventually, students always ask what my favorite bass lure is. To me this is a very loaded question - as a tournament angler I have about ten rods in the boat rigged with different baits for the variety of situations that I may face during an outing. I think a better question would be, "if you could only use one lure for bass, what would it be?" Or, "what is the easiest lure to catch bass on?" The answer to both of these questions is the stick worm. Why? Because bass absolutely devour the bait and stick worms are incredibly versatile. They can be used effectively in a myriad of conditions and fished weightless, Texas or Carolina rigged, wacky style, or drop shotted, just to name a few. Most tackle companies have their own version of the stick worm but not all are created equal. Some worms are empregnated with so much salt that the durability of the plastic is compromised and the bait gets destroyed after just one fish (which is both inconvenient and expensive). Other stick worms stay on the hook all day but smell like rubber and only sink if on a weighted hook. In my opinion the Kalin's Sizmic Wac-O-Worm is the right choice. The perfect amount of salt has been added to the plastic so that the bait is durable yet soft, flavorful and sinks at a fast rate. 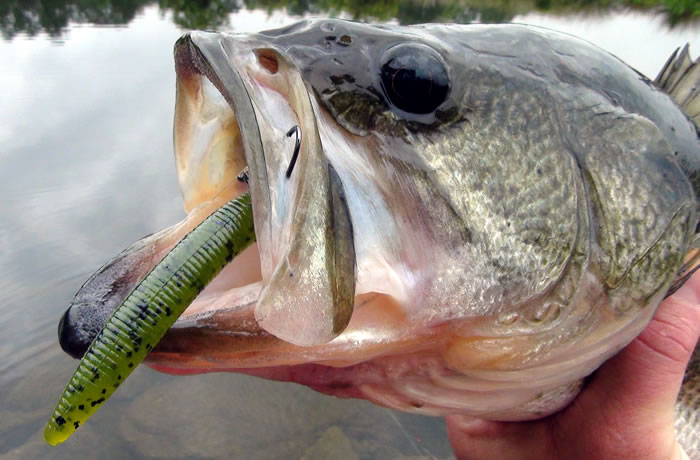 This June the latitude and the size/depth of the lake you are fishing determines what stage of the spawn bass are at, and this plays a large factor in how and where to use stick worms. During the pre-spawn, I generally fish shallow bays that warm quicker than other parts of the lake. When casting around docks and weed clumps, I rig my stick worm "wacky" (hook the worm though the middle) with a Gamakatsu Wicked Wacky Hook 1/0 tied directly on 40 lb braid (unless it is ultra clear water and then I run a fluorocarbon leader spliced with a double uni knot). Simply cast out and let the bait sink on slack line. Be sure to watch for the line to jump or start moving as the worm settles. If the Wac-O-Worm gets to the bottom without the line indicating a strike, slowly reel in the slack and feel for tension in the line or the subtle head shake of a bass that picked up the worm. When in doubt whether the wacky hook has hung on a weed or is in a fish's mouth - set the hook! If the bait still hasn't been enhailed, I then quickly sweep the rod back, popping the worm up off the bottom and bringing it about 10 feet closer to the boat. I again let it settle in the same fashion described above. If I am not hooked up by this point I cast to a new spot. Actually skipping under docks and into brush requires a completely snag-proof rig on heavy line to get fish out of the cover and in the boat. I use 40 lb braid tied directly to a Gamakatsu Superline Offset EWG Hook with the point still buried in the worm. Skip the bait as far back into cover as possible and carefully watch the line to see if a bass has picked it up. Be sure to hit the fish hard at the first sign of intake so it doesn't run and get you wrapped up - braid and superline hooks don't guarantee anything, but they do at least up your odds.

As the season progresses and fish begin to spawn, I blind cast a Wac-O-Worm for "bonus" fish while running the trolling motor searching for bass guarding beds. When I locate a bed, I make a few long distance casts near it, and sometimes that is all it takes. If you are working a fish that remains on the bed but didn't engulf the initial offering, try dropshotting a downsized four inch Wac-O-Worm in a color that stands out against the bed so you can easily see when a bass sucks it in. Many anglers prefer white baits but I use a Blue/Black Flake Wac-O-Worm because it stands out well against a light colored bed and is a more natural color that results in more bites. Stick worms can also be deadly on deeper rock and fresh weed growth near spawning bays after beds have been abandoned. My general rule of thumb is that water over six feet requires a wacky jig to quickly get it into the strike zone. Another option is to insert a nail weight into one end of the worm which also causes the bait to sink faster, but this time in a vertical fashion. I usually use twelve pound fluorocarbon unless the weed growth is extremely thick and fish are burying themselves and coming unbuttoned. Again, the technique is simple, cast out along the weedline or rock bar and let the bait sink to the bottom. Then gently remove the slack while checking for a weight on the line or a tug indicating that a smally or bucketmouth has munched your offering. If not, sweep the rod back towards the boat and see if it gets picked up on the second fall. You can repeat this cadence all the way back to the boat or quickly reel in and fire the bait to a new spot.

Using a stick worm is one of the easiest and simplest ways to catch bass. Try these techniques this June and I promise you will put bass in the boat. We are very fortunate to have such great bass fisheries here in the Midwest so please consider practicing catch and release!

Dave Lorier
Dave Lorier lives in Oconomowoc and has been hunting and fishing in Wisconsin since his childhood. Dave earned his degree in wildlife ecology from UW Madison and then went on to work for the Wisconsin Department of Natural Resources in Fisheries Research and Management. Presently Lorier is a high school science instructor and also teaches youth outdoor education courses. Dave enjoys all types of fishing and hunting, especially competitive bass fishing, bow hunting, and ice fishing for bluegills.
BITS & BITES
Advertise here
Advertise here
Please take a moment to visit our sponsors. Without them we would not be here.