By Kevin Fassbind - May 1, 2014
I love catching panfish all year long. As an avid ice fishing tournament angler, I spend my winters trying to figure out what panfish want to eat and where they position themselves in their environment. This article will focus on seasonal location of bluegills and crappies and techniques for fishing open water. 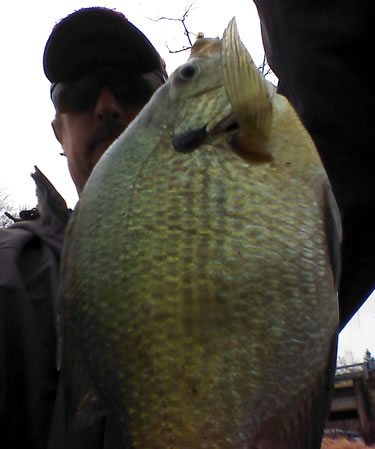 For the purpose of this discussion, we will consider early season as the period immediately following ice out until the water temperature in main lake basin reaches the upper 50s. During this period I focus on looking for areas that warm up quickly like ditches, shallow rivers, and creeks. There may be fish in other areas but not in the concentrations I am interested in. There are two ways to locate fish this time of year and the choice depends on water clarity. My favorite way is the same as it is in the winter, however instead of using an Aqua-Vu camera, I put the trolling motor on high and look for fish using my polarized glasses. Most fish this time of year will be easily seen in large concentrations. The other way involves making precision casts to cover, such as pier legs and brush. Often you can land 3 feet away from cover and never get bit; if you land 1 foot away, the bobber goes down immediately and repeatedly. I have even anchored up on cover, pulled out my ice fishing long rod, and caught finicky fish from thicker cover. My rigging is fairly simple and is derived from my ice fishing success. The line should never be over 4 pound test, and I always use a clear line. The hook is going to be an ice fishing jig such as a Custom Jigs & Spins Chekai Jig in a 3mm to 4mm size. These tungsten jigs, which are heavier than lead jigs, tend to work perfectly with a small yellow hard foam ice fishing bobber. The heavier tungsten jig eliminates the need for a sinker which makes for more accurate casting. Tipping the jigs is another simple matter in my opinion. For decades if I was fishing early season, I was fishing with spikes. Recently though, I have become hooked on the new two-inch Pork MEAT Leeches from Uncle Josh. These baits come in a variety of great colors, red and purple being my favorites. Slowly but surely, these baits have won me over and replaced live bait in both open water and ice situations. The two-inch MEAT is segmented with a large and small piece. The larger piece is perfect on an ice jig. Hook it once through the end and then hook back through the MEAT one more time. Hooking it in this manner you can catch dozens of fish on one bait. No worries making long casts and losing your bait either. The other bonus is that you can keep it in your truck or boat and it cannot be ruined by heat or cold unlike live bait.

As the lakes warm into 60s, fish generally vacate extreme shallows seeking main lake areas during this pre-spawn period. There will always be some fish that remain shallow in early season areas and through the spawn but these are not the big concentration. Generally pre-spawn fish seek out areas adjacent to where they will eventually spawn. As a good rule of thumb, these areas usually associated with the first submergent weed growth. These areas can be located visually in clear water. Humminbird side imaging is also a great way to locate standing submergent vegetation. Fresh green beds of milfoil tend to attract the most fish. In the absence of good submergent weeds, deeper docks, brush, and reeds can hold fish this time of year. The "ice out" rig described above will work if fish are sunning 1-2 feet under the surface but this is a rarity. Fish usually tend to be down 4 to 6 feet this time of year on the lakes I fish. There are two bobber fishing techniques which will work for catching fish deeper in the water column. One way is easier, and the other way is better. The easy way is to employ a slip bobber. This will work adequately, but small baits have a tendency to hang up and not fall to depth. The bigger problem is on finicky bites; you cannot jig your bait as well because the line slipping deadens the jigging action. My solution is to use my 9 foot steelhead rod, allowing me to set my jig and bobber up to 7 feet apart and still cast easily. My point being, use as deep a set as your equipment will allow. My choice for baits is going to become boring, as it is the same as before. If crappie are more prevalent, try 1/32 marabou or hair jigs, but they especially seem to like the MEAT. 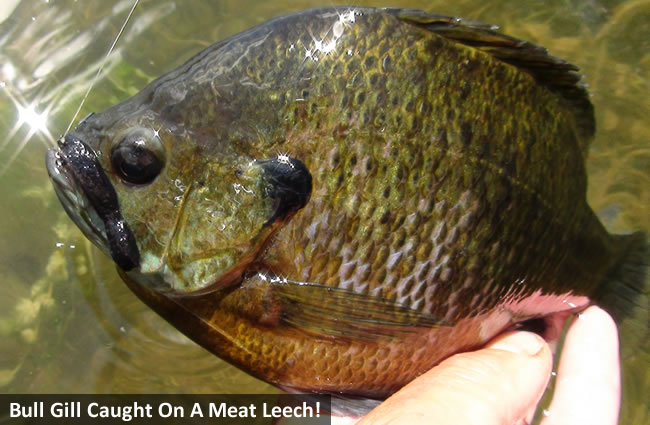 The spawn is a great time to fish. Crappies spawn earlier, usually when waters hit 60. During this 2-week period search docks or weed flats for nests. Conversely, bluegills tend to spawn when it is in the mid 60's, but I have seen it go on for 2 months sporadically. They can be in one foot or ten, just keep your eyes open for concentrations of beds. All rig choices previously discussed will work. Please practice catch and release at this time of year or just take enough for a meal.

During the post spawn, fish transition into weed-edge habitat or become pelagic and roam open water basin areas. This time of year, in most lakes, open water fishing tends to resemble ice fishing. The use of sonar and Humminbird side-imaging becomes more important. I won't even put a line down at this time of year if I don't have evidence of numbers of fish around. Side imaging is by far the best tool as you can detect schools of panfish up to 300 feet on either side of your boat. Once located, a lot of the fishing tends to be vertical or semi-vertical if drifting. If fish are suspended, an up-sized ice jig like a Custom Jigs Chekai in a 4mm or 4.5 mm dressed with an Uncle Josh Pork MEAT Leech will do the trick. You won't believe how fast these tungsten jigs get to depth. If the fish are near bottom you can use a drop shot rig. A drop shot consist of a weight on the bottom of your line and a bait above it. This allows you to get your bait to depth even faster. Tie a hook or jig 1 to 2 feet above the weight; when you hit bottom, shake the bait. The weight allows you to keep tension on line so you can feel bites. On a drop shot I like a 10 wire hook dressed with a small chunk of Uncle Josh Pork MEAT 7-inch Crawler. Again the power of the pork is it that doesn't come off the hook like traditional summer live bait.

You should have enough panfish in the freezer by now, but if you don't, you still have one more chance. Fall is a tough time to pattern panfish as they may still be roaming the basin, but my favorite place to get them is around docks. Bluegills tend to congregate in these areas especially on warmer calm days usually during September. Crappies tend to congregate in basin areas right up to ice up. Finding these fish is a job for the capabilities of the Humminbird side imaging unit. Catching bluegills shallow this time of year requires the same tactics as the early period. Basin crappies can be taken with summer tactics with one twist, the depth they are sometimes at requires a heavier presentation. Small jigging spoons like a Kastmaster or Halis tipped with live bait or MEAT can do the trick.

Panfish are definitely one of my passions. They are delicious and fun. If you enjoy fishing them as much as I do, I hope you have a few new ideas.

Kevin Fassbind
Kevin Fassbind is a year-round tournament angler, targeting bass on open water and panfish through the ice. Kevin has made a total of 12 Wisconsin Bass Federation and Wisconsin BASS Nation State Teams including being crowned State Champion in 2009. Among his accomplishments, he won the 2006 state Mr. Bass tournament. Kevin has also earned team of the year status 5 times in team tournament trails, including Big Bucks Bass and Northland Bass. Kevin and his ice fishing partner Nick Smyers took 2nd place in the North American Ice Fishing Circuit (NAIFC) Qualifier on Chisago Lake, MN and Lake Maxincuckee, IN. The team has seven top 3 tournament finishes since they began fishing the NAIFC in 2010 and earned 2nd in overall standings for the 2013 and 2014 season.
TRENDING DISCUSSIONS
Advertise here
Advertise here
Please take a moment to visit our sponsors. Without them we would not be here.