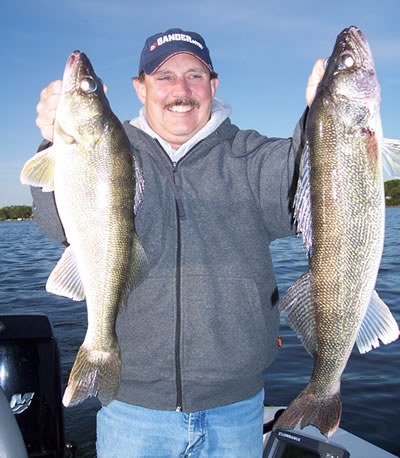 With so many reasons to look forward to the spring one that always comes to like minds is the walleye run with ice melting and rivers running. About 80 to 90 percent of the walleye across the country move from main lakes into the rivers to spawn. Unlike during the summer when trolling for big fish can be hit or miss, big walleye become more catchable when they migrate upstream with the masses. Rain and melting snow will fill rivers at various times and produced strong current. Fast-moving water draws walleye upstream to spawning areas like a magnet. As good as all that sounds, high water and spring fishing present their own problems. But, attention to detail and modifying presentations to meet conditions can overcome the obstacles.

Finding walleye during the spawning run isn't always easy. It may seem simple to look at a map and predict where walleye will spawn - on hard-bottom areas of gravel and sand as far upstream as they can go until it stops. After laying their eggs, females start back to the main lake while males wait near spawning areas for late-arriving females. When convinced the spawning run is over, males head to normal areas too. As a result, walleye are constantly on the move.

Anglers must be, too, if they want a chance to connect with one of these monster walleye. Still, you'll often see boats hovering at spots that produce for a while long after the bulk of the fish have passed by. You really have to be mobile when it comes to fishing spring fish as they won't hold in one area.

That's the problem. Many anglers get too hung up on one spot. Do not overlook the seams of slower water where current from feeder creeks or inlets. Water can be clearer there, which is an important detail when high water can dirty the main section of the lake.

Run and gun until walleye are located. Spring fishing can often result in "pack fishing", where several boats crowd onto the same spot. But, walleye will eventually respond to fishing pressure by moving away or shutting down their activity. Don't be afraid to go your own way. Being a loner can pay big dividends. 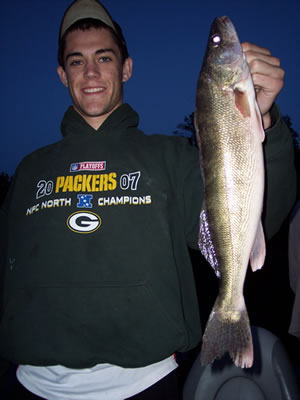 Anglers can often "over-think" their approach to fishing. Big catches can be had by using a keep-it-simple philosophy while paying attention to details that others overlook. A jig and minnow combination can accomplish the task of catching multiple fish while having a chance at the trophy we all like to brag about.

Vertical jigging while slipping with the current is an extremely productive and enjoyable technique. Instead of waiting for fish to come to you, you can go to them. You never know what's in store for you.

While most people might stick with six to eight pound monofilament in clean water I like to go with smaller diameter line like 6 pound test (2 pound dia.) P Line CXX, fishing in dirty water try using 10 pound test (2 pound dia.)Flame Green Fire Line braided line. This switch to braided line can transform your jig into an extra "eye" beneath the water. Its sensitivity telegraphs the type of bottom content that lies below, whether gravel, sand or mud. Its sensitivity also helps detect light bites common in cold water, an edge that can be critical when water is high. Fireline's thinner diameter cuts through the water and permits use of lighter jigs.

With fast-moving current, it can be important to fine-tune your presentation by adding a small number 12 barrel swivel in line to prevent line twist. If you don't use a swivel, you're likely to feel a "thump" and set the hook, only to miss the walleye. In that case, it's likely the jig was spinning and the hook was pointed away at the crucial moment when the fish attacked the bait. A Bait Rig's Odd Ball or Lindy Max Gap jig, with their super sharp hook, can also help you catch more fish.

From the barrel swivel, try adding a two-foot fluorocarbon leader to the lightest jig that will reach the bottom and allow you to stay vertical as the boat moves downstream with the current. If your bait isn't on the bottom, you aren't in the walleye's strike zone. The angler in the back of the boat usually must step up a jig size or stay as close to the front of the boat as possible to stay on the bottom.

Color of your jig can always be a key factor. Think about how many times you've been in a pack of boats and everyone seems to be netting walleye. Then, suddenly, the action stops. The fish quit taking the Chartreuse or orange jigs that everyone is using. Most anglers will assume conditions changed and the bite is off. Or, the fish moved away. These anglers will stick with the same jig, stay in the same place and hope for the best. Make the assumption that the active fish have been caught. More walleye probably lurk below, but they are the more inactive ones. Rather than trying to trigger a feeding strike, try changing colors, change your jigging motion, and go for a reaction bite. Even try something off of your normal color chart.

It can be amazing that the simple things you can do that will make a difference. You might only get one or two more, but by the end of the day that can work out to a lot of fish.

In addition, try switching your live bait choice from the standard minnow to a leech or half a night-crawler. This typically happens a little later in the spring and when temperatures warm up above fifty degrees.

Anglers also overlook the importance of scent, a factor that can be important when the water is cold. Jigs with hair, like Fuzz-E-Grubs, hold scent longer than jigs without it. There are a ton of commercial scent products to add to your jig.

Still not working? Fishermen also have the option of taking off the jig, adding a clip and snapping on a blade bait, like a Zip Lure. The vibration can help hungry fish locate it or trigger a reaction bite from inactive fish. Rip it hard three times and follow it down each time, then rip it half way and let it drop until it's just off the bottom, then hold it there.

Have you gone back to the spot where slipping with jigs was producing for you the day before and you get stymied first thing in the morning? Did they move overnight or are they still there and just less interested than they were the day before? One way to find out is to anchor upstream from the spot and cast or work a Wolf River rig slowly on the bottom. Use a 3-way swivel with a short dropper and a sinker heavy enough to stay on bottom, a 3-foot leader to a simple hook, orange bead and a minnow. This can be a deadly technique during cold fronts on the river. 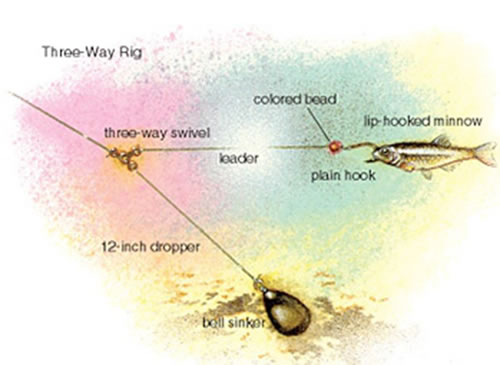 The same tactic works if walleye simply moved closer to the bank on sharp turns to escape strong current. Some fish will go right into the trees, so position your boat right next to them and anchor. Capitalize on the action as long as it lasts, catch them when they are shallow feeding by cast light 1/8 Oz. Jig, Mister Twister, Gulp, or Blakemore Road Runner.

After the walleyes have spawned, food becomes more important as they begin moving back downstream to the main lake. As a result, walleye can be caught first thing in the morning by trolling crank baits on shallow flats. Don't waste time. If they are there, you'll catch them right away. Capitalize on the action as long as it lasts try these tactics to increase your catch.

Scott Hill
Full-time guide Scott Hill owns and operates Fishing Thrills Guide Service, featuring the lakes of South Central, WI. Scott has been guiding for over 13 years and is one of the best multi-species anglers in the area. Scott is an outdoor writer and seminar speaker. He is a member of the NPAA, Walleyes for Tomorrow. Sponsors include: Big Titan Tiller Steering, Rock River Marina, a pro-staff member of Alumacraft Boats, Minn-Kota trolling motors, Hummingbird graphs, For more information check out his website.
TRENDING DISCUSSIONS
Advertise here
Advertise here
Please take a moment to visit our sponsors. Without them we would not be here.