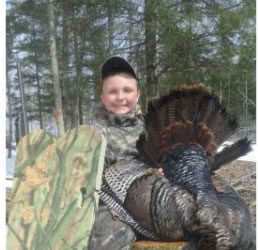 Austin and I were exhausted from hoofing it through the snow that at times was nearly waist deep. It wasn’t long into the first morning of last years youth hunt that we felt as though the odds were severely against us. Needing a break to clear out the snow in our boots we decided to set up against a large oak tree that had about a thirty yard circle around it without snow. Here we could try and dry out. We did notice that the area was pretty scratched up from turkeys as we nestled in behind the ghost blind. In front of us was a swamp area that held some turkey tracks around the edge.

The spring turkey season is fast approaching and the anxiety of the weather is the topic of most discussions. Reports and sightings of turkeys are increasing as they are making their way into viewable areas. Do not be surprised at their raw adaptability to survive a winter. If they have a food source they will survive the cold weather.

Turkeys eat over three hundred types of food. Farm crops are an easy out for them but there are plenty of other choices. Even with the snow cover birds will sit in trees and eat seed crops, berries and buds to survive without batting an eye. Put in a swampy area where the snow cover on the ground is less, and there are plenty of hemlock, cedar and fir trees– the birds have cover and food.

So where does that leave those who are hunting the youth hunt as well as the first couple of seasons of the year here in Wisconsin?

The key is switching up spring tactics from calling birds to setting up where they will be feeding this time of year.

With snow still on the ground it will be easy to eliminate a lot of territory. Don’t spend too much time in snow-filled areas even if they are proven spots without the white stuff on the ground.

As every day passes we are getting more and more sunlight. This has a direct effect on the organisms around us. Turkey hormones are starting to kick into gear and they will begin to set up their dominance hierarchy within their groups. Toms will separate and begin to try to carry out their harems.

Calling to turkeys will not be as effective if you are sitting in a snow filled area, birds know their habitat and will be less eager to go into areas like this.

Find areas with no snow cover right now and you will find birds. They will be seeking out south facing slopes where the ground is exposed leading them to nuts and seeds on the ground. Perhaps they will even be able to find some green growth.

There are windswept fields that have less snow and the increasing intensity of the sun is helping further expose those fields. Finding these fields is another key to putting a bird down for the count.

As Austin and I discussed the possibilities of the rest of the day, we decided that our set-up seemed pretty good. The ground was frozen so we had to wedge our decoy in some branches from a blowdown.

Austin began some calling in the midmorning sun. It wasn’t but twenty minutes that he whispered to me that he saw a bird making its way through the cedars and hemlocks in front of us. I grabbed the camera and picked up the movement. There were three toms making their way right towards us and Austin already had his gun shouldered. The birds waited just on the edge of the swamp before heading out into the oak hillside that we were on.

One of the birds saw our decoys and got curious and came out into the open, as quietly as the birds crept in, Austin snapped the safety and fired the lethal blow. The remaining birds took off back into the swamp.

As we walked up to his bird on the ground and Austin tagged it, the other toms began to gobble. A hen behind us began chatting and the birds continued to gobble and approached us as we watched the situation unfold. It was another eye-opening experience for both of us showing us the unpredictable behavior of nature.

Dress warm and dry during these early seasons and follow the food source and you will put the odds in your favor for bagging a big ole gobbler.

Scott Stankowski
Scott Stankowski is the senior outdoor writer for centralwisconsinsports.net and produces weekly articles, typically highlighting getting kids active in the outdoors. His family prides itself on living off of the land. Scott also takes the mantra into the classroom where he teaches environmental science at Wisconsin Rapids Lincoln High School. Scott and his sons have won numerous titles in turkey and deer calling at the state level. Scott and his sons have a national outdoor television show titled Growin' Up Wild and can be found on Facebook.
TRENDING DISCUSSIONS
Advertise here