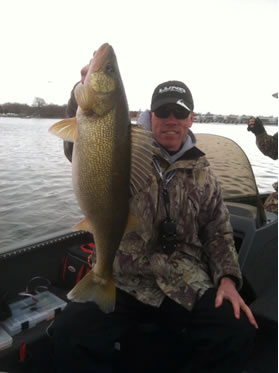 Nothing marks the start of spring like the thousands of walleyes that migrate up the Fox River each year...and the anglers that follow them. The walleye fishing on the Fox River is world class and offers a good chance at a walleye weighing more than 10 lbs. Understanding the dynamics of this river, such as how water clarity can change with precipitation and runoff, is critical to finding and locating big walleyes; and getting them into the boat.

The section of the Fox River below the De Pere dam is 7 miles in length. The majority of fishing is done in the first mile from the fish refuge located north of the De Pere dam to roughly the Highway 172 bridge. There are plenty of fishing opportunities north of Highway 172, but that is another topic for another time. Access to this stretch of river can be found on both sides of the river. On the west side you have the Brown County Fairgrounds launch. It has 65 parking spots for rigs and overflow parking is available in the park. Fox Point boat launch is on the east side of the river slightly downstream from the Brown County Fairgrounds launch. It contains 103 parking spots and has a small amount of overflow parking. Each launch site has gas stations nearby where you can gas up, grab a snack, or purchase live bait.

Once you're on the water you'll find a main river channel from Highway 172 all the way up past Voyageur Park. This river channel ranges from 15 - 27 feet of water and holds high numbers of walleyes all throughout the spawning run. Anglers may notice that the edges of this river channel have changed in places, particular up near the dam. PCB clean up efforts has included dredging many areas of the river. This has altered the contours in locations. Also important to note for new anglers is the area near the dam that has been set aside as fish refuge. The fish refuge begins at a series of power lines that spans the river and extends south to the De Pere dam. No fishing is allowed south of the power lines and this line is carefully watched by DNR game wardens.

Location of walleyes in the system is based on a few key factors; particularly water clarity and timing of the run. Often, early in the season, water clarity is very good with visibilities up to 6 feet. This tends to keep walleyes in deeper water, generally relating in some way to the river channel. At this time slipping the current with a bow mount trolling motor or anchoring on the edge of the channel and offering up a variety of presentations near the bottom is likely to get you bit. The standard is a jig and minnow combination, but there are plenty of other tactics that will stretch your line. Unfortunately for most anglers, this bite is short-lived as the water soon loses its early season clarity.

Inevitably, runoff and precipitation will come and the water clarity will diminish. This is often when other tactics shine. It also tends to push walleyes shallow as the light is filtered in the dingy water. A great tool for finding out water clarity, before you journey to the river is to use the USGS real time waterdata website, which is found here: http://waterdata.usgs.gov/wi/nwis/nwisman/?site_no=040851385 Early on in the spring turbidity (water clarity) will be below 8. You can easily see what I'm referring to in the graph. Water turbidity was steadily around 5 until the first rain after ice out in 2013, which occurred on March 10th. Runoff and precipitation add sediment to the water and visibility often declines dramatically. To be able to catch fish when turbidity rises above 10, an angler needs to adapt. With turbidity levels rising to moderate levels, say 10-20, the angler that goes against the grain often catches more walleyes. The old standby of dragging or vertically jigging a jig/minnow combination usually doesn't tempt many walleyes in this period of dingy water. They simply can't see and can't feel the offering.

The first tactic to consider when water clarity diminishes is a vibrating blade bait. Walleyes use their lateral line to hone in on the vibrations given off by these baits. My favorite, which adds vibration from a blade and a grub, is the Vibrations Tackle Echotail. To catch fish when visibility is below 1 foot adding vibration to your presentation is a big bonus. Pitch the Echotail at a 45 degree angle down current. Let the bait fall to the bottom and begin popping the rod tip. You will feel the vibration as the bait rises 6 - 18 inches off the bottom. You don't want the bait moving great distances, you want the bait to be vibrating up and falling back down in the same relative position. Repeat this lift/fall presentation while maintaining bottom contact with each fall. This sends off a continuous vibration that walleyes can dial in. The bite is often as the bait falls or is sometimes literally sucked up off the bottom. 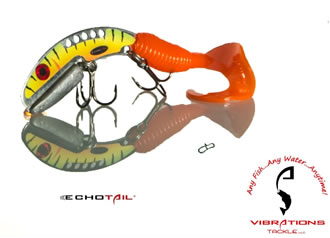 Another tactic worth trying when turbidity levels rise above 10 is a jig and plastic combination. A ringworm or grub on a 1/4 or 3/8 oz. jighead will send out a pulsating vibration that walleyes can feel. Often, when water clarity is reduced, walleyes push shallow onto sand flats. Slowly reeling a Kalin's grub or ringworm can often produce the biggest walleyes in the system, and in many cases from shallower than 5 feet of water.

These shallow water tactics are not for fishing near the refuge where the bottom substrate is rocks. I prefer to leave the spawning walleyes alone. It has been my experience that a high percentage of the walleyes "caught" near the refuge are snagged by anglers throwing large crankbaits. Some of the biggest catches I've had on the Fox have come during cloudy water on sand flats downstream in as little as 3 feet of water. It's an understanding of when a big walleye will go shallow and how to catch them that just might put a 10 lb walleye in the boat for you this spring.

The Fox River below the De Pere dam is an exceptional fishery. Understanding how turbidity influences the methods needed to catch walleyes will help you put more fish in the boat this year. The WI DNR has established a special size limit on the Fox to help protect spawning females. From March 3rd - May 2nd only one walleye over 28" may be kept. Be courteous to other anglers on the water and enjoy a fun, safe fishing season.