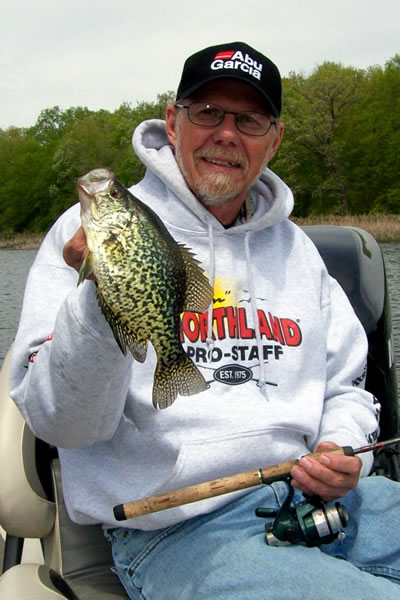 Over the years, I have read a kajillion articles on how to catch spring panfish. Some of them have been excellent and some have been a little farfetched in my opinion. I believe catching spring panfish is not that difficult if one sticks to the basics.

The first and most important concept in catching crappie and gills is finding them. I don't care what kind of angling skill a person might have, you can't catch fish if they are not there.

For me, the most important aspect of finding shallow panfish is understanding why they are shallow to begin with. These early season fish are not up shallow to spawn as was once promoted by many. This springtime, shallow water migration is all about food, namely invertebrates.

When it comes to food, water temperature is key. The warmer the water, the more active the invertebrates become. For this reason, I find the best early season panfish haunts are the ones that are somewhat disconnected from the main body of water. The more disconnected a bay or channel is, the faster it will warm up in the spring.

A mud bottom and vegetation doesn't hurt, either. Some of my hotspots become unfishable as new vegetation starts to grow.

A second point in early season panfish success is understanding the spookiness of shallow fish. They do not tolerate a lot of commotion and will move out of an area if they are pressured by the presence of too many boats.

I have found it is best to anchor up in a position as far from the fish as possible. Long casts made with long rods will put fish in the boat but not scare them away. Long rods also make hook sets easier because they pick up slack line faster than a short rod.

Make mental notes about where you find fish. It is not uncommon to have fish in a shallow bay relate to the same dock or shoreline location year after year. The fact that the boat next to you is pulling fish after fish from a spot and you can't get a bite 30 feet away may be all about location.

Although most of my spring fishing is done with small, feathered jigs, I have found that the same small jigs and plastic tails that catch panfish through the ice also work very well on spring panfish. A brown or red Northland Slug Bug can be ideal.

I rarely use minnows at this time of the year. It seems the panfish are more interested in invertebrate looking creatures than minnows. I do find that reluctant biters sometimes respond well to Gulp. It is easy to use and stays on a hook very well. There is no doubt that panfish are king in the early open water season. By following some the basic concepts, catching crappie and bluegill is not that hard to do on most days.

Jerry Carlson
Jerry started his outdoor career in 1987 when he began writing for Outdoors Weekly. He currently writes about a 130 articles a year for various publications in the Midwest. In addition to writing and giving numerous hunting and fishing seminars, Jerry does weekly radio shows on two St. Cloud, Minnesota stations; WJON and WWJO. He also authored a book called Details for Locating and Catching Fish. Hunting and fishing photos and articles written by Jerry, along with his email address, can be found at jerrycarlsonoutdoors.com. Jerry fishes all species but prefers crappies in the winter and bass in the summer. He also loves to hunt Canada geese in the fall.
TRENDING DISCUSSIONS
Advertise here