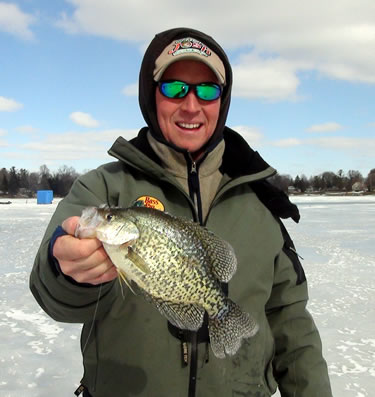 Have you ever heard the saying "ninety percent of the fish are in ten percent of the water?" I find this to be very true when ice fishing for panfish. Ice trolling is a technique that I use to locate elusive schools of panfish roaming deep water basins and even shallow areas devoid of weeds.

I start by drilling dozens of holes using a cordless drill attached to a 5" strike master hand auger via the Beaver Dam Drill Converter. This lightweight, quiet, but yet powerful combination, allows me to make Swiss cheese of the lake with ease and without fatigue. In the last few seasons I have even started drilling holes while remaining on my 4-wheeler because of the time it saves. I literally never step off the machine-just pull up, drill and then drive another fifty feet, punch, and continue punching holes until the entire area is drilled out. The first time I did this was because I was tired after a full day of fishing and I just had to try one last spot before heading home. It felt lazy, but the amount of time it saves is significant and it has become part of my ice fishing strategy.

Once you have your area drilled out, grab your sonar but don't bait your hook-it's not time to fish yet! Sure, you might be able to jig in one spot over a deep water basin and catch a few fish, but that is not what "ice trolling" is all about. Ice trolling is about going to the fish and finding large schools that will compete for your bait. Individual fish tend to be a little finicky, they might look at your bait for a long time and turn it down or light bite causing you to miss them (I like to call those fish sniffers). If you target large schools they often become competitive with each other which results in aggressive strikes and lots of fish on the ice. It may take a little while to find them, but you will do some serious damage when you do.

To find these schools I jump back on my ATV, sonar in hand, and run through my holes just like I did while drilling without ever stepping off the machine. The goal is to find holes where the screen of your flasher is lit up like a Christmas tree with suspended fish (again, not just one fish). When you get to a hole, drop your transducer in and look for suspended fish. Hopefully your flasher is lit up, but if not, swing the transducer under the ice from side to side with a rocking motion to reveal fish in the immediate area of the hole but not directly beneath you. If this shows nothing, drive on and repeat.

Ok, you finally found fish and the sonar is glowing red, green, and yellow-time to fish! I like to keep my bait above the fish to make them compete with each other which often results in fish engulfing the bait with reckless abandon. For basin bluegill and crappie I use tungsten jigs because the weight allows me to get down quickly in case the fish disperse. It also gets me back in the game faster to keep the school ignited so I can keep stacking them up on the ice! My first choice for tungsten is the 4mm sized Chekai Jig made by Custom Jigs and Spins. I prefer the Chekai because it has a compact profile with good weight to it, and it comes equipped with a very sharp, high quality hook. In situations deeper than 30ft, or windy conditions, a 4.5 or 5mm size jig may be more effective. When fishing bluegills I prefer to stay as small as possible, but when targeting crappies I don't hesitate to use the larger sizes.

The finishing touch on the jig is a piece of Uncle Josh Pork Panfish Leech. The leeches come in six colors so I can easily match my jig or even experiment with new colors without having to retie my jig. My personal favorite is pink but I like the ability to adapt to any situation. The Uncle Josh Pork Panfish Leech is segmented with one side matching the size of a spike, and the larger a wax worm. I tip the jig with the spike sized piece for the gills and the larger segment is killer for crappies. The natural pork fat has great action and is soaked in live bait scents so it constantly emits fish attracting oils into the water. If the bite is tough, it sometimes pays to fillet the pork into even thinner slices which undulate with even the slightest twitch of the rod. One of the best qualities of the Pork Panfish Leech is its tendency to stay on the hook fish after fish, allowing you more time fishing and less time freezing your hands while re-baiting.

Try this run and gun approach to ice fishing and I promise it will pay off. Just don't get discouraged if you don't find a school after your first 20 holes! If you find fish and they leave (or you catch them all) just keep searching for new schools to wallop. Keep your head up and keep moving-if you do I bet your bucket will be a lot heavier at the end of the day!

Nick Smyers
Nick Smyers is a year-round tournament angler, targeting bass on open water and panfish through the ice. Nick has made five Wisconsin Bass Federation State Teams including being crowned State Champion in 2012. One of Smyers' highest achievements in bass tournament fishing came in 2009 when he was a BFL All-American Qualifier and took 2nd place at the TBF National Championship. Nick and his ice fishing partner Kevin Fassbind took 2nd place last weekend (January 26th 2014) in the the North American Ice Fishing Circuit Qualifier on Chisago Lake, MN. The team has seven top 3 tournament finishes since they began fishing the NAIFC in 2010 and earned 2nd in overall standings for the 2013 season.
TRENDING DISCUSSIONS
Advertise here