Color Under The Ice 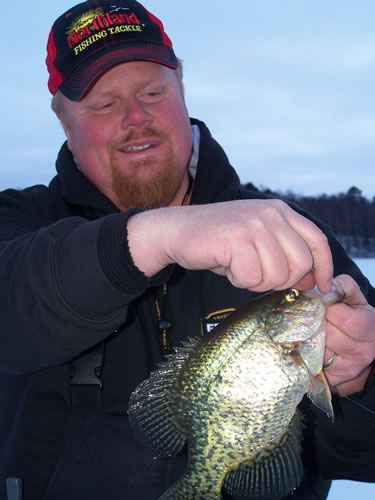 It might not seem like it, but the late ice season is not that far off. With Polar Vortex's and such displaying their power, warmer weather seems like a long way off. However, as the days continue to get longer and the sun moves farther north, we can be assured that the fish under the ice will sense a change and start to bite. One of the things that will determine whether or not they will bite your bait is color. Following are some thoughts on the importance of color under the ice.

It's important to keep in mind that color is just one consideration whether you're ice-fishing or open water fishing. If the fish want to eat, they'll sometimes eat your bait regardless of color. Other times, if they're being fussy, color becomes much more important.

One of the reasons we hold the color factor in such high esteem is because we can see color. When we go into a store to buy some baits, we see size and color. We don't see the action of the bait, and we can't see the sound it makes. Action and sound are two important factors also, but they often don't get the consideration that color gets because we don't see them.

I've heard it said that color doesn't catch fish, it catches fishermen, and that may be true to some point. However, a color that doesn't catch fish isn't going to be in a lure manufacturer's line-up very long. Some companies spend a lot of time experimenting and tweaking to get a lure's color exactly right.

Under the ice, light penetration is much less. The ice and the snow on top of the ice prevent light from penetrating. Also, the sun's angle is more extreme, so that light penetration is lessened also. It's harder for fish to see stuff under the ice much of the time. That's why baits that make noise and baits that glow can be so much better under the ice. On a recent ice-fishing trip to Big Stone Lake on the Minnesota/South Dakota border, the new UV Buck-Shot Rattle Spoons were real winners. These are new colors, so maybe the fish just haven't been conditioned to them yet. But their highly visible paint is easier for the fish to see also. I've seen many times when baits that glow caught most of the fish.

Another color consideration for the end of ice-fishing: Small bugs are starting to make an appearance at the bottom of the lake at the end of the ice-fishing season. Some very savvy ice-anglers like to match the hatch of these little bugs, and the color that best matches them is black. These anglers usually start with black late in the ice season. However, if black isn't doing the trick, they won't hesitate to switch to another color in hopes that it will. And, when it comes to fishing, that's the best thing to keep in mind: If what you're doing isn't working, do something else. If you keep this one rule in mind, you'll catch more fish more often.