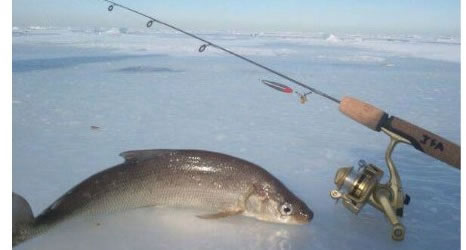 Many years ago my father and I headed out to the Bay of Green Bay for some ice fishing perch action. We nearly lost the truck due to bad ice and the fishing failed. The fishing in the Bay since then has gone down the drain and so has part of the economy. The poor fishing has affected local guides and related services.

With the advent of invasive species– most notably the goby– game fish have learned to adapt and have made the invasive species part of the food web. A fish that has taken advantage of this is the whitefish. Their numbers are at an all time high right now and the interest in fishing for them has brought the guiding business, as well as the economy, back in the right direction for Door County.

That is where Kelly Burmeister Petz of Ice-Fishing-Adventures comes in. He safely took the boys, our friend Randy and me out to get some whitefish. There were plenty of other people out there near shore, but if you wanted to get out to better fishing grounds, it was near impossible without the help of a guide due to ice and snow conditions.

Kelly is a former Alaskan fishing guide from Wisconsin, so he knows his stuff. He brought us out several miles from shore to the preheated shack we would fish out of. Kelly always puts clients in a new area, moving the shack every day a little bit. It was evident that it was a good thing. The shack and area was very clean.

We hopped into his truck with chains and drove safely out to the shack as we watched plenty of vehicles stuck and bottomed out. Randy and I never would have made it out in our trucks.

We got to the shack and Kelly baited us up. He set us up with the traditional slider rig tipped with waxworms and spikes. He gave me a jiggin’ rap which would be a bit more of an aggressive presentation to bring the fish in.

It took me two minutes and I had a fish on. Whitefish are very light biters and actually seem to just latch on rather than snap at it. The fish came up through the hole, Kelly brought it out, ripped its gills to bleed it out for a more white flesh and placed it in a bucket.

The fishing was on and it was hot. Cade was next to land a fish, followed by Randy and Cade again. Austin was getting frustrated and Cade was giving him the business, aggravated by the fact that Austin was using electronics to mark his bait and fish.

With the slider rig, you wanted to pound the bottom and wait for the fish to start to pay attention and rise to the slider where you would slow down the presentation to entice a strike. Austin quickly got the hang of it and started banging out fish, taking the lead in fish caught.

One of Kelly’s employees, Neal, came out to join us and gave us even more tips and tricks. As the morning wore on, the bite slowed but they kept us catching fish with subtleties that no one without a guide would get.

We not only were enjoying great fishing, but the conditions were just about perfect. At 11:30 Kelly called us outside as he had fresh Belgian Trippe sausages and locally made fresh hot dogs for us to dine on, all part of the package. If you have never had a Trippe I suggest you check them out. Although they are hard to find and not cheap, we definitely were treated well. After lunch we got back at it. Randy actually had to quit because he had his ten and he enjoyed watching the rest of us limit out.

When Austin and I reached nine fish we decided to catch and release waiting for Cade to get to his tenth, which didn’t take long. All in all I think we caught about 55 fish with what we kept and threw back. We hopped back in the truck and headed back again watching plenty of people shoveling out trucks. We passed through a group of do it yourselfers who had nothing to show for it. We were back to our vehicle safely on shore by two o’clock.

I challenge any guide to give me and my crew the type of courtesy, expertise and attention that Ice-Fishing-Adventures provided. Cade even took a break for a while and was not bored as Kelly and Neal kept him entertained while still helping us land the fish. Not having to bend down to the hole was actually nice. If you know how to catch the fish then I would suggest renting one of their shacks for the day which are already warmed up, holes drilled and a grill provided on proven spots that catch fish as soon as you get there.