Time to Get Squirrely

By Scott Stankowski - December 3, 2013
I think just about anybody can figure out how to shoot a meal of squirrels. Sometimes it does seem difficult, especially those that hunt other species. It seems as though the squirrels know when you are bow hunting as they are out everywhere. The boys and I trekked out recently to try and fill a pot full with squirrel meat.

We headed out to my dad’s property where there were more than enough squirrels for Austin and me. CJ came along as Austin’s wingman and I went solo. Sometimes I guess brothers do like to hang out with each other, which I am totally fine with. 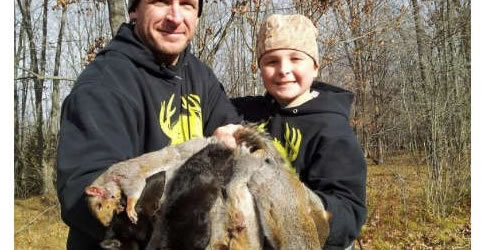 Once the deer season is over, there is plenty of time and no reason not to head into the woods. In fact, it is a good excuse to loosen the straps on your stand over the winter and into next fall as the tree will have grown by then.

The best days are high pressure warm days once it gets colder out. Squirrels seemingly are out at all times of the day but have a tendency to be more active during three particular times.

The first hour of light always seems to harbor squirrels. How many times on your deer stand were you fooled by the footsteps of a bushy tail? Another sure tell time is just before sunset as they are getting their last meal in before scurrying into their dens for the night. The best time for you now is probably sometime during the middle of the day. Squirrels again will most be active during the warmest part of the days which tend to be around one to two in the afternoon.

I like to set up in a spot I have seen a lot of squirrels during the bow and gun deer hunting season and go from there. I try not to sit in a spot to long changing my location every twenty minutes to a half an hour depending on how I am feeling. Hunting near the edges of corn fields and oak stands holds the most promise.

On this particular day, I set up a little ways away from the boys in anticipation of some quick action only to find that the squirrels had different ideas. I sat and waited for a while only to doze off in the warm sun. I was awakened by the scampering of two squirrels in a quarrel chasing one another directly towards me. It wasn’t long before I had my first bushy tail in my game bag.

The action picked up and before long we had squirrels everywhere. At one point in time I had five squirrels barking within 50 yards of my spot. It was exhilarating and with Austin’s shot, more squirrels would get agitated and bark, exposing themselves to me.

In the end we harvested eight squirrels and left many more if we wanted to head back out this year.

Cleaning squirrels can be quite the chore, but I taught myself a way to clean them that ensures a more enjoyable meal that is mostly bone free.

I take the meat and soak it overnight in water and milk. The next morning I put the meat in a slow cooker and add a can of golden mushroom and French onion soup. When I come home from work I add egg noodles to thicken and serve when it is done. I typically like to add a little sour cream to my prepared meal and for a little bit of crunch I add some crushed tortilla chips. To me it is no comparison to what Grandma used to make as far as flavor, but it certainly does the job just fine.

I hope we can get out again, as squirrel hunting is some of the most exciting and fun hunting that there is for a father and son excursion