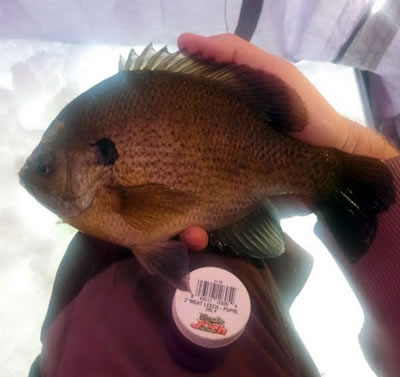 When ranking the most popular fish people target during the ice season, bluegills and crappies place near the top. They fight strong, taste great, and are plentiful in most lakes. When pursuing these well-liked fish, I've learned two very important factors. One is to learn panfish winter habits and their movement. Knowing why and where these fish move to can make you unstoppable on the ice. The second factor is to keep an open mind and be willing to quickly adapt to fish feeding changes. Too many times, anglers get stuck in a rut using a tactic or bait that produced well one time three years ago. Panfish feeding behavior can change daily… and some days it seems to change hourly. Although the same old song and dance may catch some fish, being able to adjust to these feeding changes will pay off greatly.

First and foremost, locating fish is obviously the most important factor when on the ice. Some anglers get lucky and drill holes right over a school. Others however, spend countless hours fishing areas that fish moved out of weeks ago. Taking time to learn the habits and movement of fish may take a little while at first, but the reward will last all season. To help find fish and understand their winter habits, we combine the use of underwater cameras and flasher sonar units. When first hitting the ice in search of fish, higher power flasher sonar units like Marcum LX series work well to quickly search large areas. These units can shoot sonar through the ice, eliminating the time it takes to drill holes. Just put a little water between the transducer and ice to see what's below. This tactic works best early in the season, when ice is fairly clear and thickness is six inches or less. Once fish are located, it's time to implement the underwater camera. Equipped with these cameras, watching fish behavior is as simple as drilling a hole and dropping down for a look. Aqua-Vu has released some great underwater cameras throughout the years, but nothing compares to their new Micro series. These compact units fit in your pocket and have DVR recording options, allowing you to view recorded footage anytime. This is an excellent option for hardcore ice anglers who study fish behavior not only on the ice, but also back home. Respected angler, Tom Fuller, once told me, "Not using flashers and cameras is like not using a dog when pheasant hunting." You'll do okay once in a while, but you'll do remarkably better when equipped with the right tools. I believe in this philosophy 100%.

When looking specifically for bluegills, nothing beats the weeds. Unlike the warmer months, weeds may be harder to find in the winter since many die off. Last year, fellow angler Matt Simpson and I spent a day in the boat marking promising areas on Lake Kegonsa near Madison, Wisconsin. We returned during the ice season to one of these previously marked spots located in five feet of water with sparse weeds. After drilling a few scouting holes, Matt had his first gill on ice within a few minutes and we decided to set up our ice shelter. The water was fairly clear and with help from our Aqua-Vu camera, we were able to watch the fish below. We noticed the bluegills would come by our holes every ten to fifteen minutes and move away clockwise. Even though the gills would bite each time they came through, we decided to follow the fish, drilling more holes around our location and moving with the fish in their clockwise pattern. This tactic worked well and recognizing these movements made the difference between catching a few fish and catching limit. Later in the season, I had the opportunity to fish with Dave Lorier from Uncle Josh Bait Company. We applied similar techniques on Madison area lakes while trying out the newly released 2" Uncle Josh "Meat" Leech. Since these Meat Leeches stayed on the hook much better than wax worms or spikes, there was no need to re-bait each time a fish was caught. This made it easy to quickly get back to fishing before the school scattered. When fish did disperse, we stayed with them, jigging from numerous holes we predrilled in anticipation of their movement. Staying mobile in weed cover and using bait that fish eat made for an awesome day on the ice. We not only caught numerous bluegills, we also managed to catch bass, walleye, and perch. 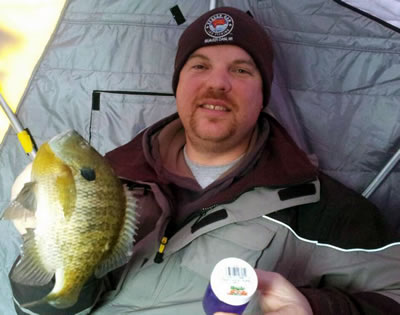 If it's crappies you're after, search deep areas. We found the majority of crappies schooled in water that was twenty to thirty five feet deep last year. Most were suspended within five feet of the soft, weedless bottom. Again, with use of our underwater cameras, we quickly learned these fish didn't move nearly as often as shallow bluegills and when they did, it was only a short distance. We were able to fish within fifty yards of a marked area all season long with very productive results. With fish holding tight, staying mobile wasn't nearly as important in this case. What was important however was the ability to detect these notoriously light biters. Unlike big gills, crappies commonly bite light and upwards, making strikes difficult to detect. Incorporating bite detectors like Beaver Dam's "Easy Bite" and using Aqua-Vu cameras can help tremendously. The "Easy Bite" has the capability of detecting upward or negative fish strikes while the Aqua-vu allows you to actually watch fish bite. We found that many times fish would softly strike jigs at the head and not the hook end. Although it felt like a bite, the hook wasn't in their mouths, and any attempt to set the hook simply pulled the jig out of their mouth. With the camera, you can wait until the hook is completely engulfed before hook setting, greatly increasing the number of fish you put on the ice.

When talking about adapting to feeding changes, there are many things to look at. As stated before, panfish feeding behavior can be phenomenal one day and sporadic the next. Many times, simple systematic changes are all that's needed. Systematic change is key, because changing too many variables at once won't specifically clarify what fish truly crave.

Many times fast jigging action will bring in fish, but once they come in, slowing things down can entice more bites. Watch how fish react on your flasher and camera. If fish are slowly approaching your jig, or if they seem to scatter after coming in, they're more than likely in a negative or neutral feeding mood and need some slow encouragement to take the bait. On the other hand, if fish sweep in with aggressiveness, they're most likely in a positive feeding mood and prefer faster jigging action.

If changing up your presentation isn't doing the trick, sometimes a color change is all that's needed. In semi-stained to heavy stained water, brighter colors are a good starting point. In clearer water, dark colors and natural forage colors can work well, but don't overlook anything. There are days where black works great and one day later fish only eat white. Let the fish tell you what they want, with a little trial and error, but make sure to give each color enough time to prove itself before switching out. If fish haven't shown much interest within 15-20 minutes, it's likely time to switch things up. Uncle Josh MEAT Leeches come in six colors (black, chartreuse, pink, purple, red, and white) so it is easy to experiment with new colors without having to tie on a new jig.

Hopefully these concepts help improve your ice season this year. Having the right tools and understanding their full potential can make a drastic difference. Let the fish tell you what's best and be willing to quickly adapt to any changes they make. Most importantly, have fun on the ice this year and stay safe!

Adam Walton
Adam is the owner of Pike Pole Fishing Guide Service, located in Southern Wisconsin. He holds a United States Coast Guard Charter Captain license and enjoys taking clients out on a variety of waters from the Wisconsin state-line to Green Bay. As well as guiding, Adam also works as a firefighter paramedic and CPR / First Aid Instructor. He specializes in year round multi-species fishing, but walleye and pan fish are his favorite. Adam enjoys the opportunity to share and learn fishing knowledge by speaking at seminars, writing articles for an assortment of outdoor media agencies, and helping with sponsor promotions at various venues. For more information on Pike Pole Fishing Guide Service, check them out on Facebook or on-line at www.pikepolefishing.com.

Adam is currently a pro staff member with Crestliner Boats, Mercury Marine Motors, Northland Tackle, and Hard & Soft Fishing. He also a member of the Pure Fishing Select Angler Program and St Croix Guide Program.
BITS & BITES
Advertise here
Advertise here
Please take a moment to visit our sponsors. Without them we would not be here.