By Mitch Eagan - December 1, 2013
Not any old spoon works wonders when the bite... bites

Flip, flash, flutter and fall; jigging spoons have it all. Whether tipped with livebait, fake or sporting nothing but a plain Jane hook, jigging with spoons is one of the deadliest tactics for taking fish through the ice. 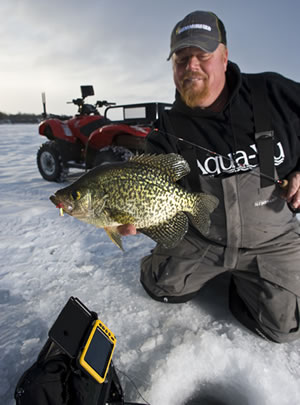 But not any old spoon is going to work wonders every time out. The lure's shape, metal-makeup and the thickness of the stamp not only dictates the action, but determines what performs best at different depths and on various species.

Ups and Downs
Enter ice-fishing expert Mark Brumbaugh; the Arcanum, Ohio, touring walleye pro that's no stranger to the ups and downs of using jigging spoons year round. And he has his favorites, especially during days when fish are in a funk.

"First of all, thin [in thickness] spoons are going to have the most 'natural' action," says Brumbaugh. "They are usually wider in shape and lighter in weight, too, which the bait to waft with the water currents; just like the very forage fish are feeding on.

Brumbaugh then revealed his go-to spoon - Custom Jigs and Spins' Slender Spoon. This lure is both slight in thickness and tapers ideally from head to foot. Unlike many other ice-fishing experts, Brumbaugh uses the Slender Spoon just the way it is right out of the package-putting no "secret" torque to it with needle-nose pliers in an attempt to alter the action. Slender Spoons require no such tweaking.

Through trial and error, Brumbaugh will determine what 'swirl' induces strikes; be it quick-and-aggressive foot-long lifts and drops of the rod tip, to nothing more than a vibration of the wrist. Oftentimes, you'll find him deadsticking with spoons; the only action coming from lake currents or the liveliest minnow in the bucket.

"A lot of anglers don't realize that a lightweight spoon never stops stirring," Brumbaugh asserts. "When you hold a rod at rest, the tip's still shaking a little - even when the rod is camped on a bucket, the lure delicately whirls with any current. It's that continuous movement, ever so slight, which gently reflects light, mimicking the scaly sheen of baitfish."

However, it's not just the spoon that makes a fish hit. To that, Brumbaugh is very specific about choosing his entire ensemble of gear. 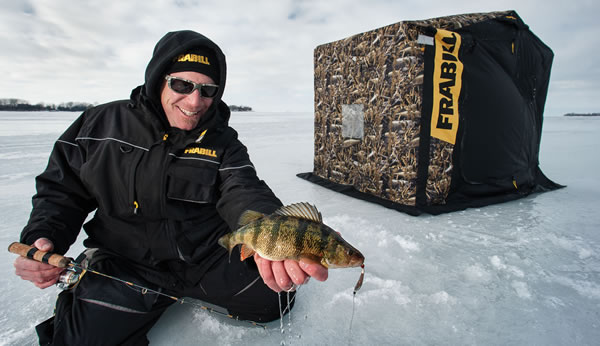 First of all, there's the largest accessory: the fish house. Brumbaugh's is a Frabill Thermal Predator Flip-Over Shelter. He asserts that fishing from a shanty improves the catch catch times two. "It's all due to cutting winter's winds, which can blow so hard they grab and pull on what little line is out in the open between rod tip and hole." Huddled in a shelter, he's able to concentrate on every flicker of the spoon, as well as detect the slightest nip.

Brumbaugh's rod and terminal tackle are lighter than one might expect, too, even when he's after fish that register as trophies.

Contrary to popular light-line beliefs, however, he adds a 12-inch piece of 8-pound-test fluorocarbon leader. Yes, that's two pounds worth of test heavier and a whole lot thicker.

"It's the stiffness of the wider-diameter fluorocarbon that keeps my lightweight spoon from tumbling and getting tangled up in the mainline," Brumbaugh says.

Brumbaugh connects the mainline and fluorocarbon via a tiny ball-bearing swivel, and then joins the Slender Spoon to the leader with a small snap (not 'snap-swivel' as the extra hardware will impede the action of the lure).

And I have experienced this love affair with spoons firsthand.

While on an expedition to Grand Rapids, Minnesota, I watched Balog work his magic with a thinly-stamped spoon on perch and panfish. And to boot, no bait was skewered on; the only dressing, a plastic bead threaded on the hook shank.

But Balog's true prowess is seeded in his confident use of electronics.

"With the aid of both my Humminbird sonar and Aqua-Vu, I can set the hook the millisecond a fish hits. The two really go hand in hand."

Balog deploys the transducer of his Humminbird ICE 597ci HD Combo the moment a hole is bored, testing depth hoping to spy active fish. Once depth is determined, he lowers the lens of his AV Micro II - a palm-size underwater camera that's attached to his Humminbird via the Pro-Snake AV-Micro Camera Mount.

"The sonar allows me to get the lure where it needs to be - right in front of the fish's nose or just above; the camera lets me see strikes before I could ever feel them. I can also see the size of the fish on the camera, and lift my spoon out of bite's way of smaller ones."

Spoony tunes
Overall, spoons rock (wobble and waggle, too) when it comes to catching fish through the ice. But not any old spoon is going to work wonders every time out.

Thinly-stamped spoons have the most flutter on the fall and an enticing waggle at rest. Just make sure to use your sonar wisely, and utilize the real-time images underwater cameras can provide, and you'll be catching more fish than ever on jigging spoons.