By Jerry Carlson - December 7, 2013
The public access was almost empty when I pulled in. As I unloaded my four wheeler, I could see a few vehicles still on the ice, but for the most part, the lake was quieting down for the mid day lull.

Once on the ice, I pointed my rig toward the cluster of houses at the far end of the lake. As I zipped across the frozen surface, I couldn't help but wonder what I would find amongst the ice shelters today.

Once at the edge of the shanty town, I parked and began the process of looking for suspended fish. It was not hard to do as there were plenty of old, frozen over holes that allowed for me to pour a little water on the surface and get a reading through the ice. 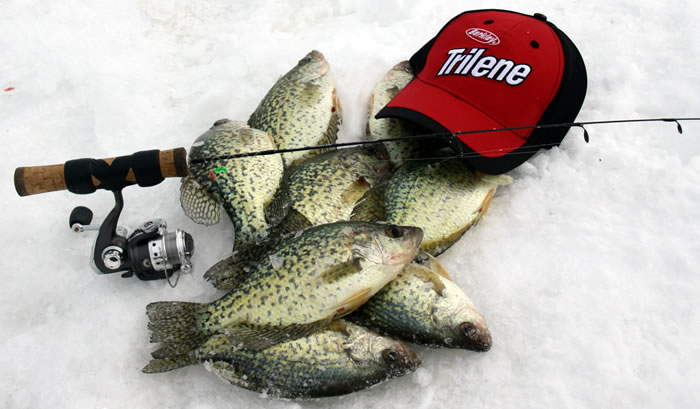 It took some time but eventually, my Vexilar lit up with fish signals that were hovering just off of bottom. Although there are never any guarantees, I was quite sure these red marks were going to lead to another fine morning of deep basin crappie fishing.

It has been a lot of years since I first started targeting deep basin crappie towns in the winter. These clusters of houses are a common site across the Minnesota lakes that I fish and generally get quite a bit of fishing pressure in the low light periods. However, they often get little, if any fishing pressure, during the daylight hours.

There are reasons for the lack of daytime pressure in these crappie towns. First of all, many anglers are working during the day and hit the lake on their way home from their jobs.

I also believe that the traditional method of angling with minnows at dusk does not produce the same kind of results during the day. Crappie are a lot fussier about what they eat when the sun is high than they are when the sun hits the trees and the shadows are long.

From my experience, I have found that by using Euro larvae instead of minnows and by scaling down the presentation to ultra light line and sensitive rods, these fish can be caught during the daylight hours. The bite may not be as fast and furious as it is at night, but the crappie can usually be coaxed into accepting an easy meal.

I will admit that not every deep basin crappie town is going to have fish hanging around all day. Sometimes, they just plain disappear during the bright part of the day and do not come back until dusk

There are other times when they are in such a wandering mode that I can never keep up with them. Once I find them and drill a couple of holes, they disappear.

However, for the most part, I find that searching for suspended, deep basin crappie amongst a cluster of houses is a pretty easy way to go. Because of the nature of deep basin fish, they rarely leave the protection of their deep water sanctuary.

Targeting suspended fish in and amongst a cluster of houses is not foolproof. There are certain lakes and certain days when the process just does not work.

However, I have been successful with this strategy a hundred times over the years. Because of my track record, deep basin crappie fishing is always a consideration whenever I am putting together a game plan for my next outing.