An Eye For An Eye

By Jason Mitchell - December 1, 2013
Matching Up for Ice Walleyes 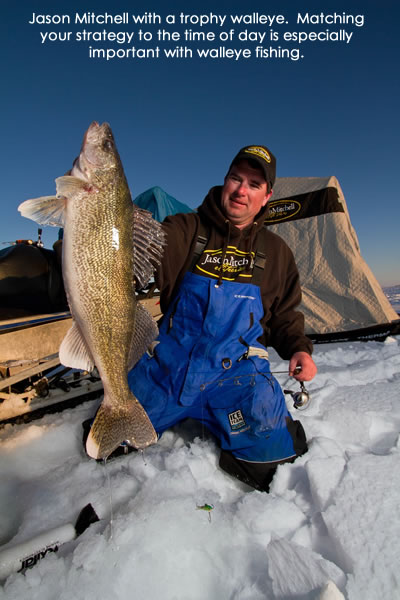 When fish are moving, you can sit on a good spot and catch fish as they push through. When fish quit moving, you have to push through a spot to keep contacting fish. This can really be evident when targeting both walleye and perch. Especially with shallower water patterns on many lakes where we are finding fish in less than fifteen feet of water, these fish movements typically revolve around sunrise and sunset.

During that prime time window when fish are reacting and making you look good, you can typically be more successful with larger lures and more aggressive jigging. The added profile and flash pulls fish in from further away and these fish basically find you and eat. These are the fish that really make you look good as an angler. When these fish see the presentation, they accelerate and attempt to catch the lure. One thing you will notice about these fish is that they accelerate fast and they actually want the lure rocking, pounding, lifting or falling. If you back off and make the lure subtle as the fish approaches, you can see the fish losing interest immediately. This is why the top anglers on the ice swear by a Vexilar. That raw analog signal gives you that intimacy with the signal representing the fish, you can read the attitude of the fish versus just seeing a line.

Most tourism destinations have what is referred to as a shoulder season. That little bit of a lull time that is before and after things are busy. Each day of fishing also typically has that lull where the traffic starts to slow down. As the sun climbs a little higher in the sky, the intensity of this bite typically drops off. The first thing that typically happens is that the fish are still moving in but become much more hesitant. The acceleration up to the lure isn't as fast. These fish will typically pause right at the lure and the movements of the fish near the lure become slower and more deliberate. If you don't make any adjustment from what was working during the prime time window, you will typically catch fewer fish. The first adjustment I like to make isn't so much with the jigging action itself but with the lures. Scale back to smaller and more subtle lures. Downsizing with the same technique can often pay big dividends.

During the prime time window and that shoulder where the intensity of the fish drops off but the fish are still patrolling, you can sit on key spots and let fish come to you. Sitting on a good location or making small moves through a good spot is often the most effective strategy. When you quit seeing traffic on your electronics however, you have two options. Wait until the fish start moving again or move through and contact more fish. When the sun gets high in the sky, I basically believe that the fish just lay on the bottom and quit patrolling their environment. Ironically, aggressive fishing presentations often shine for these fish but there has to be a method to the madness. Aggressively jigging inactive fish is a top strategy because often, you have to turn or move the fish to catch it.

Imagine drilling a line of ten holes down a break line and there are fish laying along the break. The odds of drilling a hole right over the top of and in front of a fish are pretty slim even when you drill a lot of holes. If however you can drill a hole within ten feet of where a fish is laying, you can sometimes turn the fish because there is a good chance that the fish might be facing away from you. Again, downsizing during the middle of the day and fishing aggressively can pick off fish during the lull period of the day. The key however during the lull is to drill enough holes over a spot where you can pick it apart. In shallow water, I also believe the drilling can move the fish just enough to make them easier to catch at times.

Most of the time, I feel I am much more efficient and effective if I stick to this basic premise of fishing lures aggressively and being strategic in how I sit and move as the day progresses. There are always exceptions however. There are days when fishing aggressively just doesn't work and you can typically come to this conclusion fairly quickly by how these fish respond. If fish flirt the edge of the cone angle and actually dart away when you move the lure, you are going to have to dead stick with a live minnow and have some patience. Most of the time, I feel like I can catch more fish with one rod and a Vexilar but when the fish are in a funk, put your hands in your pockets and dunk as many minnows as you can legally do so.

The intensity of fish movements that revolve around the low light of sunrise and sunset is pretty universal but there are also many exceptions. Lake of the Woods and Lake Winnipeg are a couple of noteworthy exceptions where the bite can pick up in tempo during the middle of the day. Stained water or nonexistent fishing pressure and in some cases light penetration reduced by overcast skies or cloud cover can alter this basic pattern.