It took only one quick glance of the sonar screen to realize the end was near. The temperature readout was reporting water cold enough that, in just a few short weeks, would sport a paper-thin layer of ice. Targeting smallmouth bass from the Lund was soon to come to its seasonal end.

But in my favor was the fact that when water temperatures sink, it creates a last-chance bass fishery with a better bite for big fish than any other time of the year. 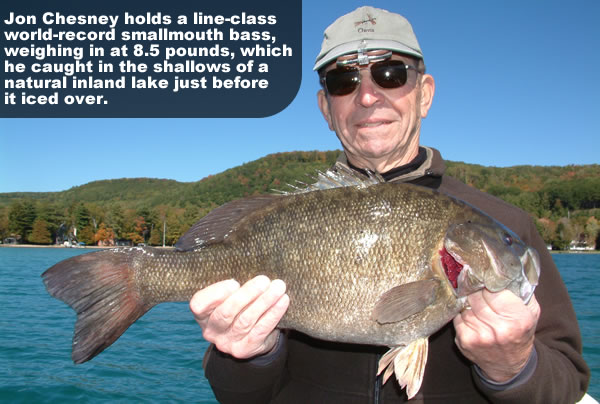 Whether you're fishing one of the Great Lakes, natural inland lakes or reservoirs throughout the Midwest, once water temperatures reach the 50's and below, there's a mass exodus of smallmouth bass from their summertime haunts as fish by the thousands swim shoreward.

And pinpointing their location is actually quite easy.

The main reason for the migration? It's all about smallmouth bass filling their bellies before first ice; a time when smallies become so lethargic that hunting down what little food sources are left would burn up more energy than they would gain from the process.

Instead, smallmouth opt to sit virtually motionless for the next few months, selecting to slowly use up calories rather than quickly exercise them on frozen appetizers.

Before the state of dormancy takes over, however, you'll find fish willing to feed in just few feet of water to depths in the mid teens. And to find pinpoint them, simply target "edges".

In natural lakes, smallies are continuously cruising steep breaklines, especially those with adjacent weeds, rock and wood. In reservoirs, points with steep, hard-bottoms attract fish; even more so if there is a bottom composition change, like were gravel butts up to clay.

Finding these shallow-water edges is easier than ever with modern-day electronics. My Humminbird 900 series, for example, is equipped with Side Imaging, which allows me to spy the abovementioned transitions in a clear two-dimensional illustration; including those often-hard-to-find bottom composite transitions.

And with the push of a button, a GPS waypoint can be assigned to transitions (even fish I've identified) without ever having to run over them.

Slow and steady wins the race 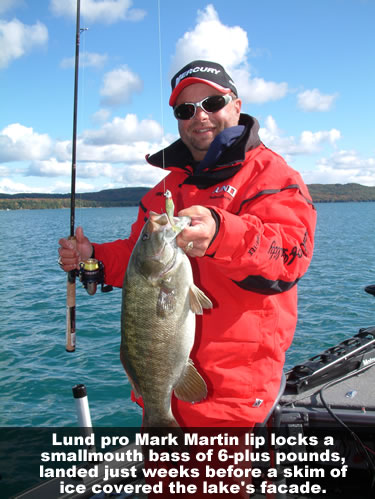 Although smallmouth bass are feasting feverishly this time of year, they're not going to… well can't, actually, chase down a bait. Being coldblooded, their bodies are cooling down right along with the water temps and are physically unable to swim with vigor.

This is the time of year when lures fished at a snail's pace, yet still full of action, will out-produce the fast and furious ones.

Evolve's VibraGRUB fits the slow-and-steady-with-plenty-of-action lure description perfectly as it can be fished on a lightweight jig (say, 1/8- to 1/4-ounce), which allows its ribbon-like fins to ripple as it slowly descends.

Tie the jig directly to 6- to 8-pound-test monofilament line and the combination will cast well on a 7-foot medium-light-action rod with a slightly slower action, such as my favorite, a St. Croix Premier. This series of rods works wonders because they flex throughout the blank, imparting perfect hook sets in cold temperatures.

Lures with lots of flash and vibration like Custom Jigs and Spins' B3 Blade bladebait are more than a smallie can let pass by, as well. Just cast the bladebait out on 10-pound-test superline, again on a softer action rod, snap the tip about a foot and then reel down to the water. The bait flutters on the freefall; most strikes happening on the tumble.

Overlooked and under fished

Despite the fact that bug hatches nonexistent in late fall, it's one of the best times to fling flies for smallmouth bass. The fish are within casting range, schooled up and easy to fool with a minnow imitation.

Just ask Tennessee's Jon Chesney, who landed a fly-rod catch-and-release line-class world-record smallmouth bass from an inland lake in northwest Lower Michigan one October day a few years back. The fish, measuring 22 inches and weighing 8.5 pounds, was landed on a 7-wt fly rod after eating a hand-tied Clouser Minnow let slow fall along a steep breakline in 5 feet of water. Because of this very fish, my 9-1/2-foot St. Croix Legend Elite freshwater fly always tags along on autumn bass runs.

Wiggle without the work

Live bait dupes its fair share of smallmouth bass in fall, too; minnows being the number one choice.

A shiner minnow or small sucker drift fished on a slip-sinker rig along the deep edge of a drop off, paying close attention to the areas around points is lights-out. The best bait is a spottail shiner-fresh from the aerated water of my Frabill Min-O-Life Personal Baitstation-which has been nipped through the lips with a size-6 light-wire hook tied to a 3-foot-long 6-pound-test fluorocarbon leader.

Overall, you can set the hook almost immediately after feeling the strike as smallies tend to suck the entire minnow up in their mouth with just one, quick flare of their gills.

Note, too, that with a prompt hookset, few fish take the bait deep and are easily released. Trust me, we're not out there meat hunting. These are special fish…

Looking to land a lunker smallie before winter stifles your plans? Just head shoreward and aim for the edges. Cast lures that can be fished slow, yet have a lot of action. Maybe even think outside the boat and cast a fly. If that doesn't do it for you, lob some live bait along the deep breaks and hang on.

The odds of landing the biggest behemoth bass of your life, a potential record maker no less, is at its best.