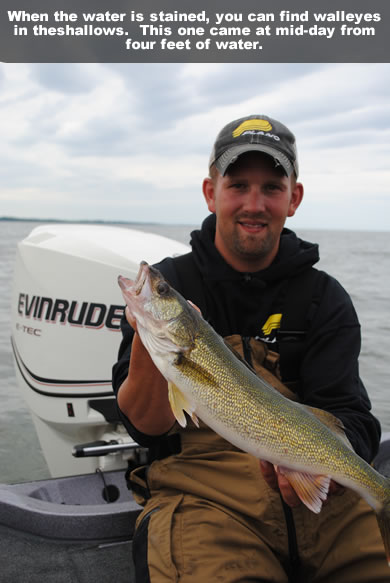 We packed a lot of fishing into a short trip to Wisconsin recently. We fished for king salmon in the morning and had great action. One of my boat partners on the salmon trip was Bret Alexander. Bret is one of Wisconsin's best and busiest fishing guides. He told me about a unique walleye bite he had been on in the past few days. When our salmon trip was over, we had a few hours on our hands. We decided to sample Bret's walleye bite. I'm glad we did. It was interesting and productive. Here's how it went.

The last time we fished with Bret we fished out of Door County in Sturgeon Bay. We trolled spinners behind Off Shore planer boards in super clear deep water to catch good numbers of truly big walleyes: A thirty incher came into our boat.

On my recent trip, we fished the Green Bay side of Sturgeon Bay. On this day we fished in water that was four to seven feet deep and stained, and we cast jigs tipped with plastic and crankbaits. The wind had been blowing into this rock reef for several days and stirred the water up quite a bit. It was mid-August, the skies were mostly clear, and we were catching walleyes in good numbers and size in shallow water. Not exactly a classic walleye technique in most anglers minds, but productive nonetheless.

For the jig bite we used three-eighths ounce jigs. That's heavier than you might think you would need in such shallow water, but we wanted to make long casts and move the bait fast. We were ripping the jigs aggressively. A lighter jig would have to be worked much slower to keep it near the bottom. The heavier jig fell quickly back to the bottom when it was ripped, and that's what the fish wanted.

Bright plastics were the deal. I used an Impulse Paddle Minnow in the electric chicken and chartreuse shad colors and caught my share of walleyes. We also caught'em on crankbaits. The Salmo Hornet in the #5 size was productive: Again, bright colors were best. It was most productive to have the bait banging off the rocks on the bottom. The bait made more noise when retrieved this way, and in stained water, the fish can find noisy baits better.

Bret said that as long as the water stayed stained, the walleyes would stay there. Wind wasn't necessary to make the fish bite, but if the wind didn't blow for a few hours, the water would eventually clear up.

This isn't a pattern unique to Green Bay or Wisconsin. Wherever you fish for walleyes, you can catch them in shallow stained water much of the time. Next time you're on the water and the wind is blowing, fish an area that has rocks that the wind is blowing into. You might find how productive this pattern can be. If you're going to be in the Green Bay area of Wisconsin and want to experience some world class walleye or smallmouth action, contact Bret Alexander at alexandersportfishing.com.