King Me A River

By Mitch Eagan - September 1, 2013
Chinook salmon are brutes in size as well brawny in battle; especially when fresh from the inland seas

It's well known fact the environment of a river is ever changing. Trees tumble. Rains fall and load the riverbed. Slowly, holes fill-in while others take shape.

This time of year, though, Great Lakes tributaries can be altered so abruptly that you can actually smell the difference in the air. At least that's what happens when some of the Great Lake's largest and most vicious predators invade them overnight. Yes, there is such a thing as a migration of fish so massive you can literally smell their unique scent wafting from the surface. 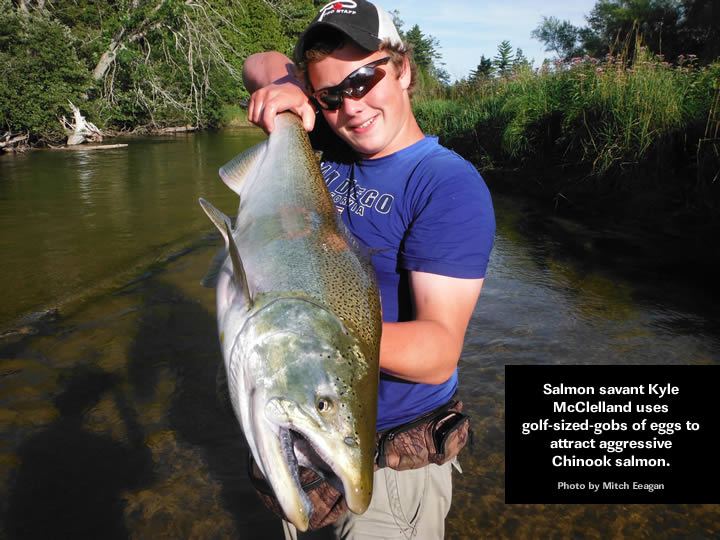 The species? Chinook salmon…. Or king salmon as they're known on the west coast and Alaska. These fish are brutes in size as well brawny in battle; especially when fresh run from the inland seas. It's all you can do to land one in a fast-flowing river any time of year, let alone when they are ticked.

Why the all rage? Because just the night before they were suspended over deep water near the mouth of the inlet; contented and atop the food chain. Suddenly, they're in less than 10 feet of water; quickly using stored energy in the current, and getting more aggressive by the moment, preparing to defend their right to spawn.

Techniques for hooking up with the king of Great Lakes salmon are seemingly endless. The two most popular tactics, however, are drifting with fish roe under a float and casting hardware like bodybaits, spoons and spinners.

Enter guide Kyle McClelland, high-school student from Fife Lake, Michigan. He spends countless hours chasing trout and salmon of the rivers (http://www.chromechasing.com/). This young gun's a guru of drifting big chunks of skein (fish eggs still bunched tight in their membrane) under a float, which Chinook have a hard time passing up.

"Even though golf-ball-size globs of eggs are not naturally found drifting in the current this time of year, salmon will eat it. But you still have to make the skein flow downstream perfectly with the current," McClelland insists.

His go to? With a 9-foot medium-action St. Croix Wild River in hand, McClelland drifts chunks of skein-wrapped onto a razor-sharp size-2 treble tied to a 2-foot leader of 10-pound-test fluorocarbon- with just enough weight pinched onto 12-pound-test monofilament mainline so his float rides fifty-percent submerged.

Unlike when bobber fishing for panfish-when you want your float to be neutrally buoyant for detecting light biters-fishing large bait in current requires extra buoyancy so that the swirling eddies don't falsely pull the entire rig under.

Lob the bait upstream of a hole, letting it drift along with the current, all the while reeling in any slack. The smack is quick and poorly managed line will be cause for bites missed. Slack line also has a tendency to get caught up in the surface current and will pull your offering down river faster than what nature intended.

Set the hook hard and be prepared to chase that fish downstream. Chances are you'll lose it in a log jam, but that's okay… you'll hook another. These fish are aggressive, and if one thug's ready to strike, a new one will more than likely be right behind. 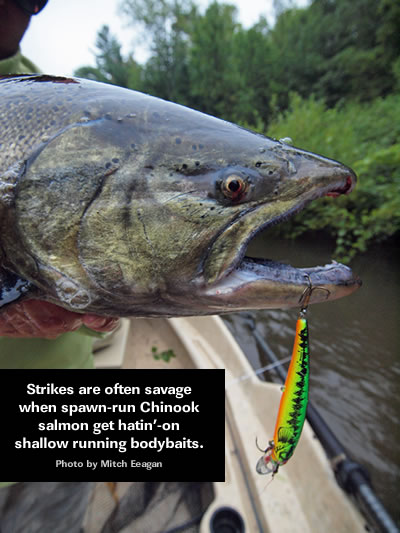 Rummaging through my own Plano tackle totes, I'll first grab a Bomber Long A, which has the side-to side wide wobble that attracts vicious strikes. Banana-shaped lures like Yakima Bait's Flatfish and Reef Runner Ripsticks fit this bill as well.

You might also consider in-line spinners sized for muskies, such as a size-5 Mepps Aglia and size-6 Blue Fox Classic Vibrax. Wide-bodied spoons that ride higher in the water column, like Acme's 3/4-ounce Little Cleo and Lindy's 4-inch Original Viking spoon, for instance, also waggle through the water just right.

Over all, a lure requires a cast slightly up and far across stream, with a retrieve just fast enough to allow the bait to run with its built-in action. The abovementioned lures don't run very deep; but not to worry, Chinook are known for rising to the occasion.

When casting lures, light- and medium-action rods are not going to be enough. This is time to break out the medium-heavy to heavy-action sticks or chance a shattered blank and a broken heart. Beefed up line and a heavy-duty reel are in order, too.

St. Croix's series of Premier rods have the strength to land powerhouse salmon. The 7-foot models are just the right length for precision casting (shorter rods better for accuracy, longer better for distance) and have the backbone to land big fish.

In general, 30-pound-test superline has the valor to withstand the shock of the strike, yet with a diameter thin enough that the current won't affect the drift. Heavy monofilament is thick, making it hard to cast and easily seized by the current.

So what do you do if you get to the river and find you're in-between runs? Hit the mouth of the river; it's where salmon congregate and stage before making their mad dash.

The same artificial lures work wonders here, too. When it comes to rods, however, this is where the longer St. Croix Premiers will achieve the casting distance needed. The real key to success is making sure every cast lands where the fish are schooled up. And this is where today's electronics come into play.

Humminbird's Side Imaging was a real game changer when it came to seeing and catching Great Lakes salmon; and now even more so with the new 360 Imaging. With either technology you can literally see fish suspended high in the water column, and then following by plugging a waypoint over the school without ever having to motor over them.

A word of warning: Catching a limit of Chinook salmon, or even one for that matter, goes well beyond line, lures, rods and reels. Once hooked and the fight is close to over, you need to get that fish in the net. And these fish are big. A wimpy net will cause nothing but chaos.

A net with a heavy-duty handle, yoke and mesh is needed to scoop and lift these bullies from the drink; my overall choice is a Frabill 26-inch by 30-inch Conservation Series landing net. The frame can withstand a twisting, turning 20-plus-pounder, and the makeup of the meshing and shape of the net promotes a live release, if that's your choice.

If the fight of your life is on your to-do list, consider fishing tributaries of the Great Lakes this fall. Drift a chunk of skein or cast a lure through a hole and hang on. (And I mean hang on!)
Mitch Eagan
Mitch Eeegan has a passion for teaching others about hunting and fishing via the typed word. The accomplished outdoor writer has spent years of merriment ripping smelt lips in Michigan's Upper Peninsula and other prolific smelty regions.
BITS & BITES
Advertise here
Advertise here
Please take a moment to visit our sponsors. Without them we would not be here.