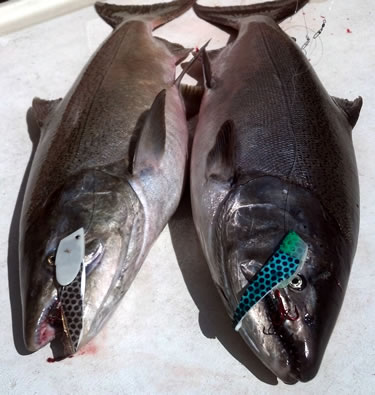 Salmon trolling is a lot like football. Just as every player on the field has a responsibility, each presentation style and bait uniquely contributes to a functional salmon trolling spread. Both on the field and on the water, specific schemes will be productive at different times and against differing opponents (species). Each Great Lakes salmonid requires a different trolling approach. In the case of late summer King (Chinook) Salmon, the tactics will change day to day and even hourly throughout the day.

As summer days shorten and we are reminded of the upcoming fall by the start of football training camps, the King Salmon become moody. In August and September, Chinooks transition from weight-packing eating machines to being driven by procreation. During this time, the fish becomes more of a reactionary striker versus a mass consumer. This transition is illustrated to the angler when one hour the Kings are all over the flasher/flies on riggers, the next only plugs on long lines, and then only meat rigs fished on the wire divers. Just as a good coach adjusts the game plan, you too must add to your playbook to maximize your catch during the late summer transition.

Many salmon anglers are familiar with plugs, spoons, and flasher/fly as weapons to put late summer Kings in the boat, but the vast majority have yet to experiment much with "meat rigs" or cut-bait. Those who have added cut or whole-bait to their salmon trolling spread know its effectiveness, specifically during the late summer months. From talking with fishermen, one major drawback I hear from anglers toward fishing meat, especially weekend fisherman, is the expense and hassle of the technique. Cut-bait requires thawing, cutting, salting and often is only good for one fish as it is broken during the vicious hit and battle of the mighty King.

Fortunately, there is now a low cost, hassle-free option for anglers looking to add to their arsenal for conquering moody King Salmon. Last season, I partnered with Uncle Josh Bait Company to create a cut-bait alternative with the weekend angler in mind. The product is Great Lakes UV Pork, a pork rind lure specifically designed for cut-bait salmon fishing. This year we have added UV to the dye for that important color flash when fishing deep or in low light. Currently, four colors are available: black dot, purple dot, green dot and blue.

The UV pork is fished the same as you would fish cut-bait: a flasher or rotating attractor followed by a 'meat' or 'teaser' head. Unlike the typical angled cut-bait, the pork has been cut so either the colored or white side can be fished facing up. The pork has a hole punched through the head of the bait for the angler to place the meat peg or toothpick through the bait head to hold the bait in the head. The pork's thickness is ¼" so it will fit snugly with large teaser heads and magnum meat heads. While the pork was sized for the most popular style of heads, if using a thinner diameter meat head, one can simply fillet a thin portion of the fat side of the cut pork near the head of the strip for a better fit.

When rigging the meat heads, my preferred leader length is 60 inches of 40# test from the meat head to the flasher when using large 10-11" rotators and 48 inches when fishing the 8" flashers. I have tried both tandem treble and a single treble hook presentation with the pork and I have yet to establish my favorite approach. However, the key in both instances is to have the pork tail at the eye of the trail hook for better hook-ups on the reaction biting Kings. In order to keep the correct length on a lone treble rig, I will thread the line through a small piece of plastic tubing so the meat head does not slide on the line.

Lastly, when fishing meat rigs, a popular method is to use 'twinkie' or teaser flies in front of the head. To date, I have had the most success fishing the meat rigs clean, without teaser flies on calm days and with teasers when there is a chop to the water. When rigging the teasers, spread your flies evenly along the leader with more space between the last fly and the meat head. For example, on a 48" leader I will place the first twinkie fly approximately 12 inches behind the rotator with the next two 10 inches, measured from the head, behind the fly in front, thus leaving 14 inches before the meat head. While flies versus no flies are just tendencies I have acquired over time, I recommend both methods to all anglers to discern for themselves.

Hooking into tackle-testing King Salmon is as fun as catching a deep bomb in the end zone. However, at times late summer salmon fishing can be as frustrating as a fumble on the one yard line. I hope this new method for fishing UV Pork cut-bait can add a new weapon to your salmon arsenal. Just as a coach with many threats can create a winning team, when Kings are finicky, having many available options to approach them can help put more in the cooler. Good luck fishing pigskin Kings!

Gabe Powers
Gabe is a biologist by trade, and a former Lake Michigan Charter Captain. He has fished King Salmon on Lakes Michigan, Huron, and Ontario. Most of his time has been spent in the WI, IL, and MI waters of Lake Michigan. It was here he captained 6 first place finishes and was in the top 5 standings in 14 of 24 tournaments. His captained boat was also awarded “Boat of the Year” two years in a row. He now spends his time with his growing family and reserves fishing time for trying new tactics, discovering new techniques, and helping others learn the sport through seminars and private consultations.
BITS & BITES
Advertise here
Advertise here
Please take a moment to visit our sponsors. Without them we would not be here.