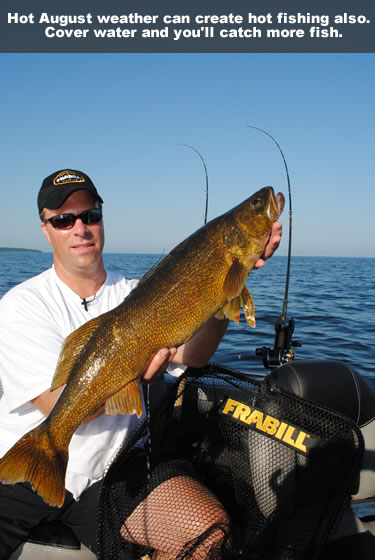 Can you believe it's August already? It's just crazy how fast time goes. In many regions of the country this has been a very weird weather year. Winter hung on as long as it could, which made the Fishing Season Opener in Minnesota and Wisconsin unusual with ice still covering many of the lakes. Excessive rain in some areas, excessive dry in other areas has made fishing different. Not bad, just different. August can be a challenging time to fish for some anglers. If we get normal weather conditions, whatever normal is, following are some ideas that will help you be more successful catching fish in August.

Keep in mind that right now is a time of plenty for predator fish. There is lots of food in the water. The baitfish that were born this spring are now at a size where they can be eaten by the bigger fish. In many bodies of water, the gamefish don't have to look very hard for a meal: All they need to do is open their mouth and swim and they get a mouthful of minnows.

When there is a lot of food in the water, often it works well to show the fish something completely different than what they're eating. Let's say you're fishing walleyes on a lake that has lots of perch, and many of those perch are in the three to four inch range, perfect walleye food. The walleyes see perch every day. I don't know if walleyes get tired of eating perch, but I've seen lots of times when a bait that looked nothing like a perch out-produced a bait that looked like a perch on a lake that had a strong perch population. Give it a try. And if that doesn't work, try a bait that does look like a perch. You never know!

Move through an area faster that you would in the spring or early summer. Fish are willing to take a fast moving bait when the water is warm. Also, by moving your bait faster, you're covering more water and showing your bait to more fish. Try working a weedline with a crankbait, something like a Salmo Hornet or one of the Cabela's HDS cranks: They're both outstanding fish-catchers. Move them fast. When you catch a couple of fish close together, and you often will, slow down and work that area thoroughly. Throw a jig rigged with plastic or live bait. After you've worked the area over good, pick up the crankbait and start moving quickly again. By the end of your fishing trip, you'll often have caught a good number of fish and covered quite a bit of water with this faster approach.

Fishing in August can be challenging, but it can also be productive and rewarding. Remember to put on sunscreen, drink plenty of water while you're out there, keep changing baits, move quickly until you find the fish, and you'll increase your chances for fishing success. I'm not going to stay off the water in August and you shouldn't either. We'll see you out there.