Cheap Beer and a Can of Corn

By Dave Duwe - August 1, 2013
Almost twenty-five years ago in college, I became a self-proclaimed professional carp angler. I was catching carp before carp became cool to fish for. I went to school in Stevens Point, WI which was a short hop to the Wisconsin River. The river has opportunities for almost all the game fish that swim in Wisconsin. But instead of game fish, I chose to fish for carp. Considered by most a "rough" fish, which is basically an undesirable fish species with very limited restrictions for harvesting. Archers also can take carp with bow and arrow at night with spot lights.

When we headed to the river we were geared up with a can of corn and some cheap beer. Corn was our preferred bait; it worked well and was much cheaper than the night crawler alternative. Our golden fishing rule for carp fishing was you had to figure out how to get the can open without an opener. Rocks or a piece of sharp metal were the most popular methods. My college buddies and I caught thousands of pounds of carp over the years and I have been hooked on carp fishing ever since. Even though I have become a tournament fisherman, outdoor writer and fishing guide, I still have time to carp fish. The only thing that has changed is that I use a can opener and can afford a better quality beer.

Pound for pound carp are one of the hardest fighting fish there is. Carp fishing is a great way to let a young angler have the fight of a lifetime landing a fish.

My carp waters have changed, my favorite carp holes are Turtle Creek in Delavan, WI; the Bark River near Whitewater, WI; and at my in-laws house on Druid Lake, near Hartford, WI. My carp crew consists of my son, Nate and Brother in- law, Jeff. We still prefer to use cans of corn over other baits.

Throughout the summer months, my wife and kids enjoy Druid Lake for swimming and family cook outs. With guiding, most of my mourning's are spent taking clients out from pre-dawn until about noon. When I am done guiding, the last thing I want to do is spend more time in the sun. However, being someone who never wins an argument with my wife, I'm headed to the lake. Armed with a cooler and my poles, I head to the back of the moored pontoon boat with plenty of shade and cushioned seats. 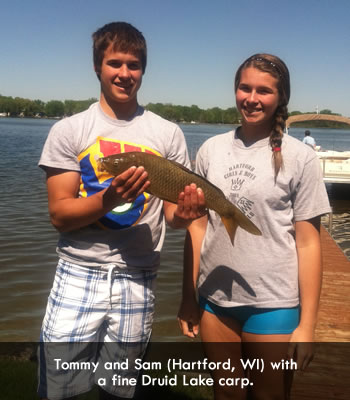 As I am fishing, I am ever vigilant while my young kids are swimming, I tell my wife I am "parenting." Occasionally, my vigilance has cost me. Several times, carp have decided to take my hook, line, sinker and fishing pole! Of course, the first pole that the carp stole was my wife's, which I had bought her for Mother's Day and she had used once before it was lost.

The tools I use are a spinning combo with 6-8 lb. Silver Thread. I will use a Berkley lightning Rod and a Mitchell reel in an ultra- light. Using a light rig makes the big fight and reel screaming unmatched fun. For terminal tackle I use a red hook number 8 octopus with enough split shot to keep it on bottom. For fishing carp in current you will need more weight. Carp are bottom feeders, so keeping your bait on bottom will increase your chances. Other baits that work are night crawlers or dough balls.

When I start fishing I will toss a couple of handfuls of corn to chum the carp in. On most days it takes less than 15 minutes to get the first bite. We have become smarter and use rod holders, so we don't lose any more poles.

And of course, everyone within a ¼ mile knows we have one because we are yelling "Fish On!" followed by "Get the net!" Using light gear it takes some time to wrestle the behemoth in. I bait the poles and watch them, however, it seems my son always catches them, and he lets me know about it too.

Our carp season starts the middle of May and runs until October. It is fishing so some days are better than others. Our family has caught 8 or 9 fish in a couple of hours. Carp fishing is some of the easiest fishing, cast it out and let it sit, wait until your pole starts getting pulled into the lake. They aren't light biters so it is easy to detect a bite.

If you're looking for a good fight and family fun try some carp fishing. And remember smoked carp is good, but it's hard to get them lit!