By Dan Small - June 1, 2013
Wisconsin's Lake Michigan tributaries garner plenty of attention from anglers during the steelhead run in spring and again in fall, when more steelhead, along with salmon and browns, make their way up from the lake. In summer, these tribs see a lot less fishing pressure, as anglers turn their focus to inland rivers, lakes throughout the state and, of course, Lake Michigan itself.

Most Lake Michigan tributaries, however, offer some great fishing opportunities, if you know where to go and how to approach them. Let's take a look at some of the larger tribs, from the Milwaukee north to the Menominee, to see what surprises they hold.

Between West Bend and Milwaukee, the Milwaukee River meanders for over 50 miles, with boulders, deep holes, runs and riffles that hold smallmouths, channel catfish, panfish and the occasional northern pike or walleye.

In the last decade or so, dams at North Avenue, Grafton, Waubeka and West Bend have been removed, allowing fish to move more freely. The river has flushed silt out of former flowages and created miles of new fish habitat.

On a recent outing in Ozaukee County, I released a 10-inch smallmouth, only to see a pike as long as my leg chase it down and devour it. In that same hole, I later caught a 3-pound catfish and a friend lost a big fish we never saw.

The river is wadable in most places, but you'll need a boat to fish below North Avenue or just above the Thiensville dam.

Even in Milwaukee and Ozaukee counties, the river feels wild, as it flows through parks and heavily wooded residential areas. You'll see more deer, coyotes and wild turkeys than anglers on most stretches. 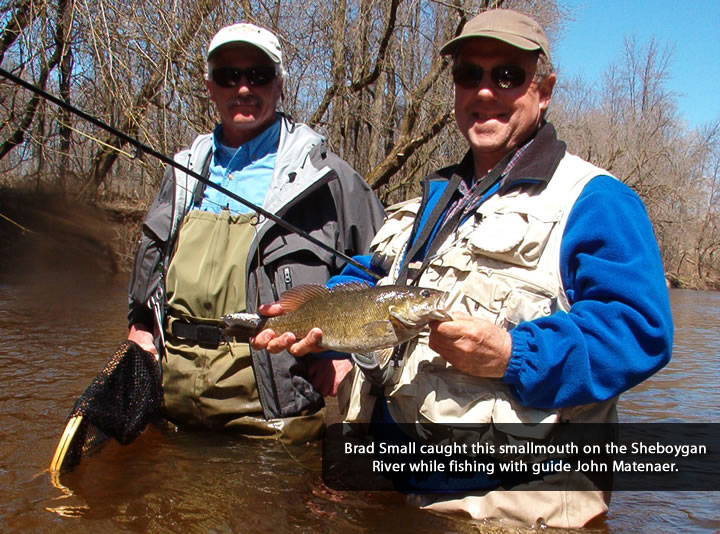 The Sheboygan River begins at Sheboygan Marsh, in northern Sheboygan County. It swings north into Manitowoc County, then east through Kohler and Sheboygan. A dam on the Black Wolf Run golf course in Kohler is impassible to fish. Above and below the dam, you'll find excellent smallmouth fishing all summer in a pastoral setting.

My cousin Brad and I have caught small pike while fishing for steelhead with guide John Matenaer, so I'm betting there are big pike in the deep holes. As we get closer to fall, brown trout move up into the river, along with steelhead and salmon.

The Sheboygan waterfront has a variety of restaurants, tackle shops and other amenities, from fishing-shanty shops to the Blue Harbor Resort and Conference Center.

The Lower Fox River, from DePere to Green Bay, is known for its spring run of massive walleyes, but the Fox also sports a year-round fishery for smallmouths, white bass, catfish and muskies.

Smallmouths hug the riprap; white bass roam open water. You'll find big cats in the deep holes, and muskies go wherever they want between the dam at DePere and the mouth.

Launch at the Brown County Fairgrounds on the west bank or at either of two public landings on the east bank. If water levels are low, those on the east bank are deeper. For tackle and information, stop at Gander Mountain in Green Bay. Eric Haataja guides here, as well as on the Milwaukee: (414) 546-4627, or wibigfish.com.

The Mink flows out of a wetland near the tip of Door County into Lake Michigan at Rowley's Bay. Big pike spawn here each spring. On a trip here many years ago, I missed Moby Pike, when she took a pass at the biggest floating Rapala I had in my box and I made the classic mistake of setting the hook before I felt the fish. In summer, smallmouths and perch move in. You'll find both in bulrushes along the rocky shoreline of Rowley's Bay and up in the river itself. Small crankbaits, jigs and plastics and fly-rod hair bugs will take bass. Live bait or small plastics are the ticket for perch.

Launch or rent canoes, kayaks, motorboats and pontoon boats at the Wagon Trail Resort at Rowley's Bay, (800) 559-2466, or wagontrail.com.

From the dam at Stiles, downstream to the mouth, the Oconto offers good smallmouth fishing. You'll also find smallies, along with largemouths, pike, muskies and panfish, above the dam in the Machickanee Flowage.

Launch a canoe below the dam, or just wade, and fish as far downstream as you like. Holes, rocks, logs and riffles hold bass. Except for one stretch of whitewater at Susie's Rapids, about a mile upstream from Oconto, it's an easy float.

You can also launch a small boat in Oconto and fish the deeper holes upstream to Susie's Rapids. This stretch is always fishable, no matter how low the river gets in summer. 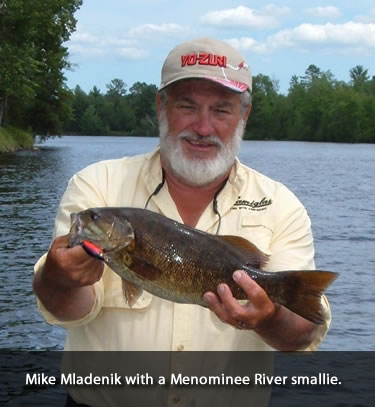 The Peshtigo begins as a whitewater trout stream, but several flowages slow it down as it bisects Marinette County on its way to Green Bay. Caldron Falls and High Falls flowages offer good action for both bass species, walleyes, muskies and panfish in stained water reminiscent of Canada.

The river itself holds all these species, so you may catch just about anything. The upper river is wild, with few good access points, so it's best to hire a guide for your first trip. In the lower river, below the city of Peshtigo, smallmouths and pike dominate in the summer.

The largest, northernmost, and arguably best, of our Lake Michigan tribs, the Menominee has to rank among the top 5 or 10 smallmouth rivers in the country. Ten power dams create flowages and halt the movement of fish, but you'll find good bass water everywhere between the dams.

The river is wadable in places, but most anglers launch a boat and fish a short stretch. The Wisconsin Public Service Commission maintains several landings on the river between White Rapids and Grand Rapids Flowage. You can launch a canoe or cartopper in many places, but watch for boulders if you run a motor.

Did I mention the river also has some nice muskies? Rocks, islands, logs and deep holes hold both bass and muskies, along with walleyes at times.

Mike Mladenik also guides on the Menominee. Or, for a superb fly-fishing float trip, contact Tim or Sarah Landwehr at Tight Lines Fly Shop in DePere, (920) 336-4106, or tightlinesflyshop.com.

As summer heats up and pleasure craft start to crowd you on inland lakes, you can enjoy great fishing in relative seclusion on one of our Lake Michigan tributaries.