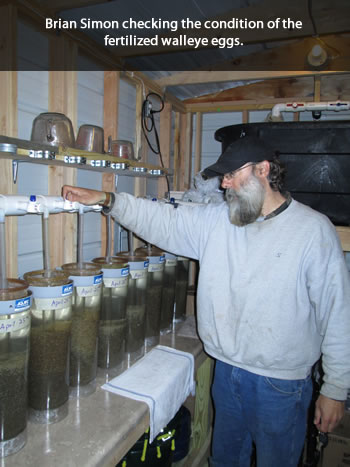 By all accounts from the old timers, Lake Geneva in the 1960's was a walleye factory. Over the course of many years the population of walleyes has been on a steady decline. This may be due to poor natural reproduction or a myriad of environmental changes throughout the decades. You can accept the reality or do something to change the harsh and steady decline. A small group of eight or so in 2011 got together to try to make a difference. They formed the Walworth County Chapter of Walleyes for Tomorrow. The mission statement for Walleyes for Tomorrow is very simple, "Making walleye and sauger fishing better". Led by Brian Simon and John Trossen the group had a definite direction to make Lake Geneva's walleye fishing great again. Don't kid yourself there are still walleyes in the lake and big monsters too, this past years' biggest female walleye was 14lbs. The goal with the Walworth County Chapter was to start and maintain a yearly stocking program to reintroduce different year classes back into the lake. This is accomplished by netting the females stripping the eggs out and fertilizing them with a couple of males. To make millions and millions of fertilized eggs it only takes roughly 48 females 24-30 inches long and a hundred males. Brian Simon explained to me that spawning happens more due to the amount of daylight rather than the water temperature, which is called the photo period. This year the walleye spawned at 37-40 degrees, which is much colder than the fishery books say.

After the fish is stripped and milked they are released alive. At the start with only eight members it was a HUGE undertaking. In 2012, the group released almost 2 million fry (tiny walleyes) back into Lake Geneva. In 2013 that number jumped to 3.9 million fry. Due to disease and other factors all hatched fry return to the lake 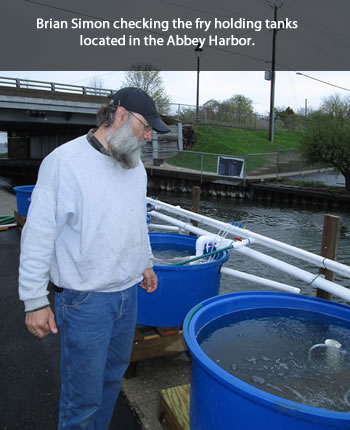 they came from, which of course is Lake Geneva in this case. This years' netting process has been completed and all of the fry have now been released into the lake. It takes about 6 hours to temper and stock the fish into the lake. A survey of the lake is done prior to make sure that the area the fry are released into is suitable for their long term viability. The eight member crew is also growing it is now about 60 members strong with hopes to continue to grow. A lot less sleepless nights for the original eight, they treat these eggs as if they were their own children.

I was drawn to this group of dedicated conservationists for the shear time they have donated to make Lake Geneva a better fishery for everyone. With the current WIDNR permit they have received which goes until the year 2018 the future is bright for the lakes fishing. With a stronger walleye population other fishing opportunities might also improve. In its hay day when walleye fishing was good the lake was full of jumbo yellow perch, not the millions of stunted ones we have today. The first public fundraiser is later this summer on August 3rd at Hemmingway's in Lake Geneva. To become a member or donate time or money to the cause you can download an application at www.walleyesfortomorrowwalworth.org