"I'll never forget the first time I got a peek at the underwater world on one of my favorite lakes," recalls Great Lakes bass pro, Joe Balog. It was the summer of 1997, and Balog had just acquired one of the very first underwater viewing systems. "I was so excited to check out this particular spot I could hardly sit still."

Having already hauled thousands of dollars worth of tournament winning bass from the location, Balog chose to target the site with his new camera for obvious reasons. "I absolutely couldn't wait to see what it really looked like; what was there that appealed so much to big bass.

That day, almost immediately upon dropping the camera to the bottom, a big, bold smallmouth swam right up to the lens. "Pretty soon, I started seeing these crazy gnarly looking boulders lying on the 25- to 33-foot sand break. And the area was just filthy with bass, obviously patrolling for prey. It was one of those wow moments-one I'll never forget. In minutes, my understanding of the area expanded exponentially. I now knew exactly how to approach the spot; precisely how to work a tube or a drop-shot." 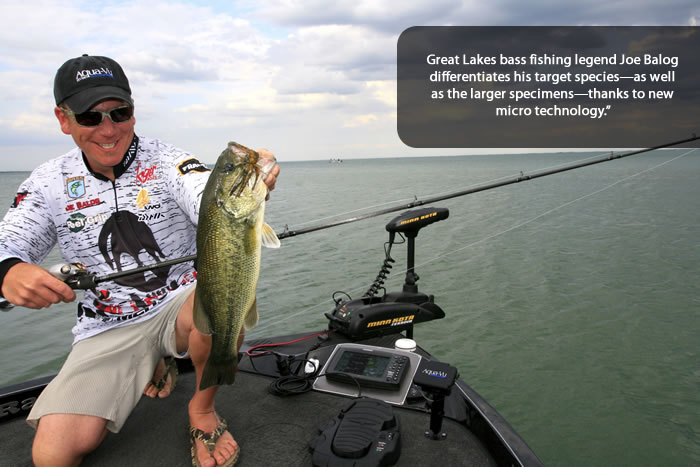 Another time, another place, Balog surveyed one of his favorite Lake Erie shipwrecks. He noted that contrary to the beliefs of most anglers at the time, the biggest bass actually positioned a full cast away from the wreck, using the ship as a giant current break. He also noted smallmouths spawning on the sides of wrecks, way down in 15- to 20-feet of water.

"It was pretty evident from the beginning that the camera was a really powerful tool," Balog asserts. "Soon, I also discovered that the guys winning tournaments in the Great Lakes were quietly using cameras for prefish scouting."

"That first camera was a real clunker," Balog recalls, laughing. "It was so big and bulky that people thought I had an X-Ray machine in my boat." This past season, however, Balog-who was also among the first anglers to use

Humminbird's original Side Imaging-rediscovered the usefulness of underwater cameras. He contends that modern, miniaturized viewing systems, such as the Aqua-Vu Micro, have greatly simplified the process. "The Micro fits in your hand like a smartphone," says Balog, "And weighs about the same. Yet this little camera offers incredible advantages over previous technology.

"Used to be that anglers would often leave their cameras at home because they took up so much space in the boat. Many days, though, you'd find something in the lake and wished you had it along. Thankfully, today, I can put a Micro in my boat's glovebox, tackle box or even a coat pocket, and it's always there when I need it." Unlike previous full-size systems, Balog also notes that Aqua-Vu's Micro runs on tiny, lightweight lithium-ion batteries, which last for hours and days without a recharge. It even has a built-in DVR for recording footage and reviewing later.

Moreover, Balog says using the Micro is easier, by far, than previous technology. "I have my camera mounted to a small RAM Mount in the bow of my bass boat. Takes just a second to deploy, and it's never in the way. The RAM Mount also lets me instantly adjust viewing angles, so the screen remains continually readable."

Ever the inventive angler, Balog has also devised a method of mounting the bottle-cap sized Micro optics to a telescoping painter's pole, allowing him to quietly probe below boat docks or beneath heavy grass mats. The pole-cam strategy opens up otherwise impenetrable areas, giving him an exclusive "sneak peek" at fish in cover.

"These new viewing systems do two things exceptionally well," Balog maintains. "One is their ability to find sweet spots on any structure-those small fishy areas we call 'the juice'. Of course, the other advantage is species identification and size.

"Today, you can find sweet spots and fish with Side Imaging, too. But oftentimes, even after scanning a rockpile, weedbed or wreck, it's really helpful to go back over it with the Aqua-Vu Micro. I like to see all those little subtle details that make the spot attractive to bass. Side imaging shows the presence of boulders and vertical vegetation-it shows a ton of real estate fast. But the camera often reveals the sweet spot, and cements the mental picture of its physical makeup in my mind.

"When I start catching bass on a certain location, he continues, "I like to drop the camera and scope the area. Usually, there's some key little element-whether it's 2-foot tall pondweed bordered by sandgrass, or mix of eelgrass with small rock. 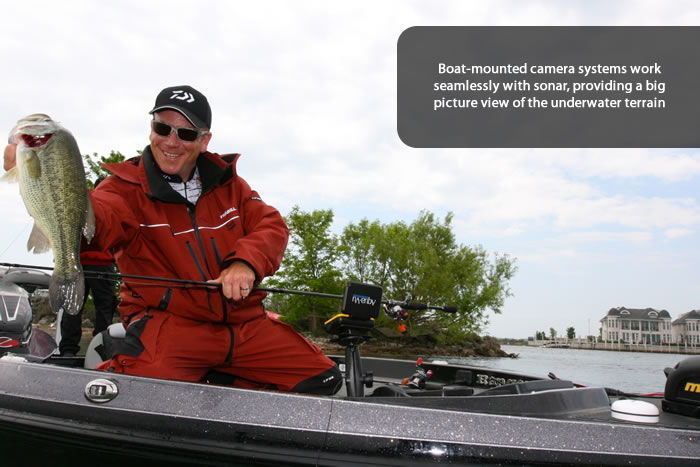 "Sometimes, too, I'll note things like crayfish or a colony of gobies in the area, and if necessary, can instantly make an adjustment in lure choice. The camera showed me early on that when bass try to eat gobies, they dart off bottom and make a mud cloud. It taught me to trigger big bass by occasionally snapping a tube or Goby Replica swimbait off the sediment. Discoveries like that can be huge."

Balog further notes how the camera has shown him that big bass often suspend way off a rockpile, wreck or reef, yet hover within the same depth range as the top of the structure. His Micro cam has also revealed one of the bigger secrets in tournament competition today: that bass occasionally follow the shade of his boat, using it as overhead cover. "They suspend too high and escape the sonar's cone. But by dropping a jig just out of sight below my boat, I've hooked some giant smallmouths over deepwater."

Beyond revealing the spot of the spot, Balog praises the camera for distinguishing species. "You never had to make a cast or hook any of your fish prior to the event. I still do this today- particularly if I'm unsure of marks on sonar and want to see the size or species of fish.

"On Erie, there are tons of bass, but way more drum, which look exactly like a smallmouth on sonar. Often, where there's one species, the other will be mostly missing. Similarly, in other lakes, I frequently mark big fish on structure that won't bite. In many cases, the camera shows walleyes rather than bass. In reservoirs, it's also common for many species to stack up on brushpiles. I can mark each pile with Side Imaging, and then quickly drop the camera to see what species are present-crappies, catfish, or hopefully, big largemouths.

Balog says that whatever you're chasing, the camera actually adds to your fishing time. "It keeps your bait in the sweet spot for the maximum amount of time. In my world, sonar is like the treasure map, while the camera puts that "X" on the spot."