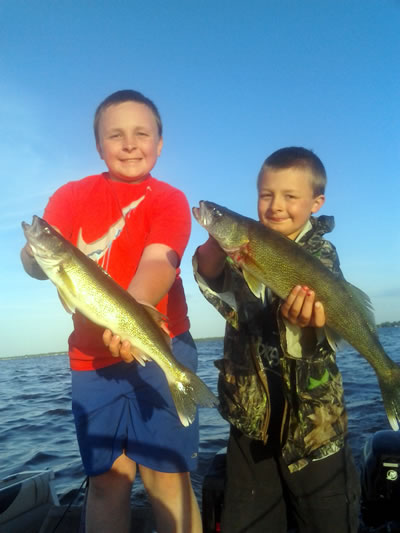 Kids typically have a short attention span when it comes to fishing and although my boys are pretty hard core they still lapse off in to la-la land. Heck I fall off into the mist from time to time. It seems as though when you are paying the least amount of attention that you will get yourself a bit on the end of your rod, set the hook too late and cuss yourself long enough to dull yourself back into the mist.

Well get yourself a set of planer boards and line counter rods and reels and you are in a different ball game. The front end costs of setting yourself up are not cheap if you are going to do it right, but once you are set up the fishing is fairly simple and great for kids.

I compare planer board fishing to tip-up fishing in the winter time. You personally do not need to constantly be watching a line or ready to set the hook. What you do need to be ready for is to have someone in the boat watching boards and most likely tattle flags.

By using planer boards, you can either run night crawler harness or rapalas behind the boards at various lengths. This allows you to cover a wide variety of water to find active fish. The fish hook themselves when the strike and all the angler has to do is real the line in on the rod, detach the planer board and bring the fish in.

The key is to get into the game. By watching fishing blogs such as the ones on Lake-Link, you will soon catch onto the lingo being used including speed of the boat and how many feet the person is running baits behind boards. Crawler harnesses are typically run slower at around 1 mph and crank baits are run at about 2 mph. I favor crankbaits when I am fishing and my go to bait is the Salmo hornet, maybe I am biased because it is from Poland.

Planer boards are sold at any local sporting good store and the standby seems to be the Offshore planer board and upgrading to the tattle flags. Tattle flags allow the angler to see a flag go down on the planer board detecting a fish. A fisherman can tell a fish strike however by watching their boards carefully and if they notice one running out of alignment compared to the others then they know something is wrong with the set-up and a potential fish is on.

Most anglers run three boards per side of their boat. Stores sell specific rods for trolling with planer boards and a line counter reel is recommended to know how far behind the boards you are running your baits. A fisherman needs to equip his boat with rod holders and he is set to go.

When I first started I used plastic, clamped on rod holders, open faced reels where I hand counted the line out and I caught plenty of fish. Since I have upgraded I have done increasingly better and it also allows my two sons to set up rods and line while I drive the boat.

This last week while fishing with the boys we are out on the Winnebago system. In four hours of fishing we boated over 40 fish, being constantly busy. Although most of our fish were sheepshead, the boys did not seem to mind that much. We managed to catch the front end of a storm front and boated 9 walleyes in the sixteen to twenty three inch range.

The key to this kind of fishing is to slowly build up your arsenal of gear and hopefully in a couple of years you have a consistent set of lures in the same body style and color. There are definite patterns to the fishing including type of lure, color, speed and depth of lure based off of feet of line behind the board. Once an angler figures this out and finds an active group of fish it is game on.

Keeping the boys interested is always a plus as the other day attested to, but if the day is slow it allows them to relax and have their own fun on the boat and when a fish strikes you can bring them back into the game at the snap of a flag.