By Jason Mitchell - June 1, 2013
This 2013 season looks to be a later spring where everything is behind schedule from a biological perspective. Colder water temperatures can be a double edged sword. Some patterns happen later or don't happen at all. When we have had cool, late springs in the past, good solid patterns for shallow water held on much longer than usual and resulted in overall good fishing conditions. Overall, some of our best open water seasons on Devils Lake, ND have been the years where we had late springs and cool summers. When the water never really does warm up and the patterns don't change much… watch out. Great fishing lies ahead. 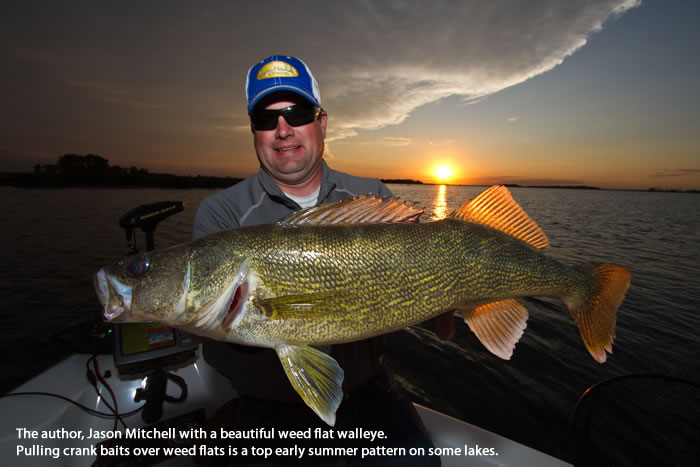 If there is one effect from colder than normal water temperatures that surprises some anglers, it might be the weed factor. On lakes that have weeds, weed growth can sometimes really accelerate when the water stays cold. That doesn't sound correct does it? You would think weed growth would be behind, because even on land during a late spring… trees bud later and everything takes longer.

On many bodies of water, the water will actually green up as it warms up so as the water warms up, light penetration is reduced. When the water stays cold, it often clears up and the overall visibility is good. This better light penetration and good visibility often speeds up or accelerates weed growth dramatically. The weeds seemingly shoot up like they are on some performance enhancement drugs, So often, cold water will enhance weed patterns on some fisheries and because these weeds are growing so fast during these conditions, staying dialed into weed related patterns takes some diligence.

During these cool water, good light penetration scenarios, the distance weeds will grow in a day are remarkable. I have found instances where the weeds would actually grow a foot in one day. As the weeds grow from the bottom and reach towards the surface, the open window or lane in which you can often catch walleyes changes dramatically. The window closes and gets smaller each day. You might start out with eight feet of water above the weeds and after a month, the open water above the tops of the weeds might be a foot. From my experiences, whenever you get situations where the weed growth gets extremely accelerated, the fishing is typically pretty solid in these locations. Fast growing weeds attract fish.

My favorite location for this fast weed growth scenario are big shallow flats. Flats that are anywhere from six to twenty feet with ten feet being about an average. Big flats that have a soft bottom and have good weeds are perfect and one great way to fish these locations is by pulling crank baits. If you have weeds that are four feet high in ten feet of water, run cranks about four or five feet down over the tops of the weeds and hang on. Crank baits cover a lot of water and have enough vibration and noise to pull fish out of the weeds. Not always, but hard vibrating cranks often work best as they seem to call in more fish and also shake off weeds better. The old school Hot n Tots with the metal bills were always good for this type of fishing. Today, the Salmo Hornet is king for a hard vibrating crank that tears up walleyes.

When it comes to trolling, I like to use planer boards at times especially early in the season when I am pulling these shallow weed flats. I will also often use my electric trolling motor if it is really flat. Not because of the quiet factor but because I can save routes and make tighter turns allowing me to work tighter spots. There are times however especially when the fish are getting triggered by speed when pulling the cranks right behind the prop works best. This typically happens more so however later on in the summer when the water does really green up where visibility is reduced and the fish are attracted to the flash and turbulence of the prop. 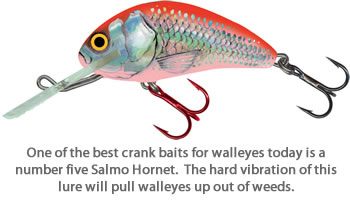 Just remember to fish the baits high. As the window closes and the gap of open water between the tops of the weeds and the surfaces gets smaller, there will come a time when you just run out of open water to work cranks. When the window does get small, shallow running stick baits or crawler harnesses are a few good options. Many anglers have this perception to move towards deeper diving and bigger cranks as the season wears on but on this pattern, you move towards shallower running baits as you have less water to work. Typically, the louder and harder vibrating shallow running minnow baits work the best. Usually, I don't have as good of luck with the real subtle minnow lures that have a real soft and rolling wobble in this situation. Kind of baits I have done well with are the Reef Runner Little Ripper (shallow runner) and Salmo Sting.

The whole key to these weed flats patterns is understanding how high the weeds are in order to fish cranks through these locations effectively. Don't be afraid to fish the lures high, now that is something that can be tough for some anglers to do… pulling a lure four feet down over twelve feet of water is a tough adjustment for anglers who are used to pulling cranks near the bottom. With weeds however, you have to fish high and let the fish come up out of the weeds for the bait. Remember that no lure will catch fish if you are pulling a foot of weeds behind the lure. You have to run the baits clean so that means fishing high and raising fish. Most electronics will reveal weeds and show you the zone to fish. Another good tool is the Precision Trolling Book for quick adjustments with baits.

Big weed flats can be a nightmare to fish if you don't fish these locations correctly but if you can get in the right mindset and fish these locations high in the water column, these locations can be extremely productive and hold a tremendous number of fish. Trolling with crank baits is one of my favorite ways to fish these types of locations but this is obviously not the only way. You can swim jigs and soft plastics, you can cast cranks or even spinner baits. For working big spots however and just amassing gross pounds of fish, trolling keeps so many lines in the water and is tough to beat.