Butchering And Cooking A Wild Turkey

By Scott Stankowski - May 1, 2013
There are a lot of people that hunt turkeys who do not realize how versatile the bird is when it comes to table fare. When I first started turkey hunting nearly twenty years ago, the first bird I shot was cleaned whole and frozen. We cooked it like a traditional Thanksgiving turkey and complained about how dry and tough it was. There was a week’s worth of leftovers and by the time it was gone, we were sick of it. 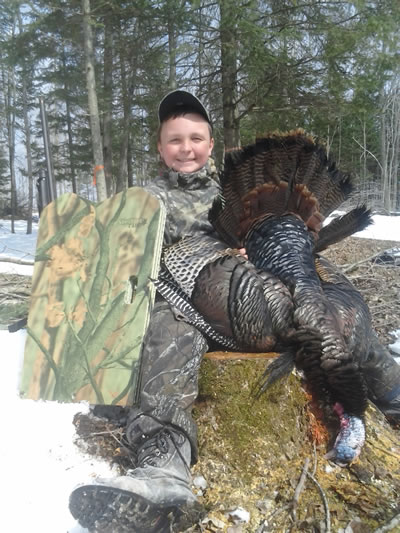 I am a huge trial and error person and was not going to stick to that method of cooking. About that time, deep frying turkeys was the ‘in’ thing to do. Without a lot of guidance from anyone, I decided a wild turkey would be just great in such conditions, because the fryer would lock in the moisture. Man, was I wrong. Not only did I fail to note that in order to deep fry a turkey the skin must remain on, I didn’ t realize how dry and tough it would become.

I fell in love with hunting turkeys and had to make them decent table fare. Through a couple of out of state trips and the necessity of freezer space, I resorted to breasting out my turkeys. What an ingenious concept that has become for my family. It is all we do right now.

I would like to share some tips and preparation skills that will enable you to enjoy your wild turkey as much as we do at my house. Between my sons and I, we harvest enough turkeys that we no longer buy factory-farm raised fowl from the store, which brings about it’s own set of nonsense.

Austin was lucky enough to harvest a nice longbeard during the youth hunt, and takes us through a step by step visual of butchering. I will add a few words for those that do not wish to watch it, but believe me, if you struggle with the butchering process, it is not something to miss.

Lay the turkey on its back and begin by making a small cut right along the ridge of the breast bone, big enough to fit your fingers into. Set your knife down and open up the turkey breast like opening a bag of potato chips. Pull the skin down past where the breast meat inserts into the wing. Next go to the neck area and pull out the crop of the bird. This is a bag type structure that birds use to hold their food before they reswallow it and send it to their gizzard for digestion. (When you are done cleaning, it is always a good idea to cut open the cop to see what the bird had been eating. It will give you hints on places to set up for your next hunt.)

Once the breasts are exposed, take the knife and cut along the bone of the breast meat on one side. Be careful not to cut into the body cavity behind the ribs and cut down until it inserts into the wing pocket. Repeat on the other breast and you should end up with four pieces of meat. Two smaller ones, which I refer to as the ‘tenderloins,’ have a tendon running through them and the larger breast.

I clean those up and divide the larger breast pieces into meals, typically I can get two meals out of one side of the breast of a decent tom. I will then later dice the pieces up and use them for a variety of dishes, including turkey alfredo, breaded and deep fried, or stir fry. If am going to keep the breast whole and grill it I always pound the breasts out with a meat cleaver first.

Are you hungry yet? Well, I have not even gotten to the best part of the bird, the legs and thighs. What? You bet, the best part. I struggled for years with this. I was brought up to not waste what you shoot and always assumed that the legs would be tough, full of tendons and only worthy of soup. Even after boiling them in soup, they still would not tenderize. Well I learned a new method.

First you need to remove the legs from the bird. Start by dislocating the hip and popping it out. Next cut along the hip bone where there are two medallions of meat on either side of the joint. Dislocate the knee joint and cut off the tendons and feathers.

The legs are so easy to prepare. Buy two cans of soup mix, french onion and golden mushroom. Place the legs in a slow cooker and add the contents of the cans. Add some water until the meat is covered with juice. Cooking time varies, but I usually set this up before work, set it on a lower setting and when I come back from work the meat falls off the bones, and tendons. I shred the meat and utilize in a variety of ways. I add barbeque sauce and make pulled ‘pork’ sandwiches, add a bit of taco seasoning and make shredded tacos, add it and the stock to soup, eating it plain with a slice of provolone cheese on a bun is also delicious.

If you have other ideas on how to cook your legs or thighs of a wild turkey I would love to hear about them. I would be happy to share them with my readers. Now go out and hunt, and enjoy several meals during the year from your bird and realize just how good a wild turkey is to eat.